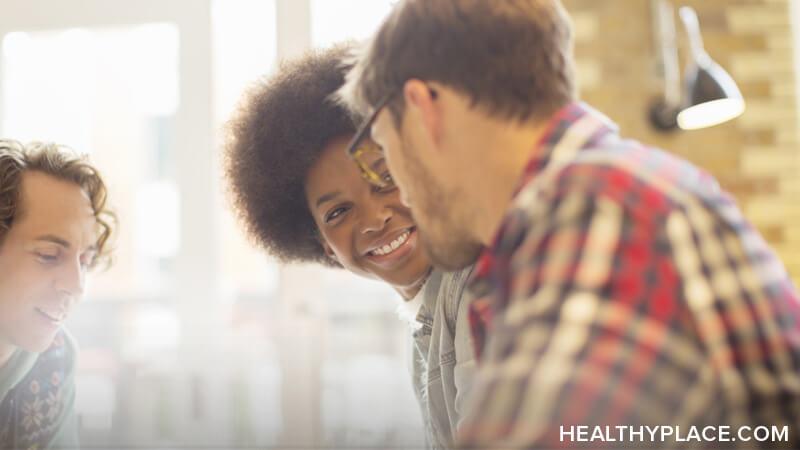 Talking openly about anxiety, or any mental illness, is a relatively new concept. For many, it can be a terrifying notion. It wasn't that long ago that psychiatric illnesses were not only a blight on the individual but on the whole family, as well. This is finally changing.

Anxiety Talks: It Lies to Us

Anxiety is an insidious beast. It sneaks up on you, lies to you, and undermines every aspect of your life. Most pervasive is the undercurrent of shame that we feel about having anxiety, as though it were a dirty, little secret. It brings about feelings of inadequacy, taunting us with thoughts like, "I'm not good enough," "I'm not strong enough," and "I'm less than."

In addition to the inner battle and the physical symptoms of anxiety disorder, we must also contend with our thoughts about others' perceptions of us, real or imagined, like:

And I might think so many other thoughts as well.

The truth is that people may indeed judge us because of our anxiety—this is because of stigma. Their judgments may influence the way they treat us. Our anxiety only exacerbates the situation by flooding our minds with recurring negative thoughts—often driven by self-stigma—further diminishing our self-esteem and self-worth.

So how do we break the cycle?

Talking Openly About Anxiety Can Help

At first, the only people outside of my doctor who knew about my anxiety (and depression) diagnosis were my husband and my children. I slowly shared my diagnosis with my siblings, then my best friends. It took over 10 years before I confided in my parents. I told myself that I didn't want to worry them. And because they had both suffered hardships in the Great Depression and World War II, I honestly didn't think they would understand.

I finally told my parents about my diagnosis when I was on sick leave for the third time in 12 years. I told them because I was simply tired of being evasive. They knew I was off work and that I was hiding something but didn't know what. This, I later came to realize, caused them more worry than my illness did. They never judged me. They were inquisitive, loving, and supportive.

I underestimated my parents. Telling them about my anxiety gave them insight into me as a person and gave me support in a place I never thought I'd find it.

Talking to My Coworker About My Anxiety

One day while on a coffee break with one of my coworkers, we started sharing our feelings. It dawned on us both that we were essentially keeping the same secret, that both of us suffered from anxiety. One tiny share led to another, then another. Soon, we were pointing at each other, exclaiming, "Me too!"

We vowed to keep our revelation to ourselves and support each other through the tough times in a way only a fellow anxiety-sufferer can. When we spoke, it was in private, always in hushed tones, unwilling to divulge our little secret to prying ears.

We spend one-third of our lives at work. Finding support from a coworker can be invaluable. It certainly was for me.

Talking to My Boss About My Anxiety

I hadn't planned on telling my boss I suffered from anxiety. I went into his office one day for our weekly status. My anxiety was high and escalating quickly. Behind my practiced, calm exterior, I was near tears, and within a few minutes, the flood gates opened, and I broke down.

I was so ashamed. I had collapsed in front of my boss—the single worst person to break down in front of as he could make or break my career. I sobbed and babbled as he gazed calmly at me, attentive, not saying a word.

When I was finally done, he leaned forward and said, "Thank you for telling me. That must have been so hard."

He followed that with supportive talk filled with empathy and compassion.

My boss was an abrasive man. Honestly, I didn't like him much. But on that day, I, once again, found support in a place I never thought I would.

Workplaces that Talk About Mental Health

The company I worked for supported those in its workforce who had mental health challenges. My first anxiety-related sick leave in 2001 was approved, and resources were provided, even though they were rather scant.

As time progressed, their supports improved. By the early-2010s, they:

In late-2010, my son—who also suffers from anxiety—came to intern at my company. I was so proud when he told me he spoke candidly about his anxiety to his coworkers, who, for the most part, were supportive and otherwise unphased. That's progress.

Talking openly about anxiety was scary at first, but it got easier. Now, every time I open up about my anxiety disorder, I feel relief. Even when judgment ensues, which is rare, at least I know it's not just all in my head. Tackling an honest, tangible reaction—even a negative one—is far less daunting than dealing with the imagined perceptions my anxiety taunts me with. More often than not, people are curious, compassionate, and supportive. So, let's keep the conversation going.

Feeling Unworthy of My Anxiety
The Power of Music on Your Mental Health
Lizanne Corbit
January, 26 2022 at 12:13 pm

I love this, "more often than not, people are curious, compassionate, and supportive." I couldn't agree more. It can be the scariest thing to talk about something like our struggle with anxiety, but amazingly when we get past the fear to do just that we are often so rewarded. Anxiety loves shame and secrecy, it feeds off of it. When we talk about it, it seems to shrink instead of grow.

Hi Lizanne. Thanks for taking the time to comment. Anxiety not only feeds off our insecurities, but it also seems to strangle us. Our minds race but we're strangled and unable to open up. Sharing those first few times—saying the words out loud—takes that heavy burden from our shoulders. It's such a relief!