Understanding My Guilt and Shame Is Helping Me Heal 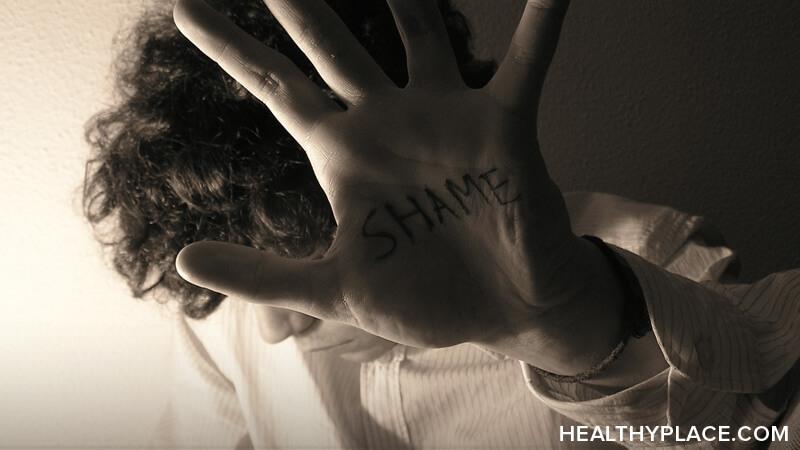 Late last summer, I went through weeks of acute panic and anxiety. I was very sick, and the mental and physical symptoms I endured were traumatic. I am in treatment to address those traumas, including the guilt and shame I felt from being sick and the residual guilt and shame I feel to this day.

How I Understand Guilt and Shame

I really had to think about it because the two seem interchangeable. I told her that guilt is a feeling I associate with something I did or didn't do, while shame seems bigger than guilt because it encompasses me as a whole.

She told me I had pretty much nailed it.

Why I Felt Guilt and Shame from Acute Anxiety and Panic

When I began therapy, I felt guilty because I believed that it was my fault I got sick. I believed this for two reasons. First, I thought the spiritual journey I had been on for almost a year had somehow gone terribly wrong. It sounds ridiculous, I know. I loved what I was learning about spirituality and had started to really believe. When my body went into acute, prolonged fight-or-flight, my brain associated it with the last thing I had been doing—exploring spirituality. The second reason I blamed myself for my illness was because I had titrated off my medications months before the illness took hold. Why did I go off my medications? Because I felt so amazing on my spiritual journey—healthier in mind and body than I'd ever felt in my entire life—I wanted to see if I still needed medication.

Even as I write this, I feel guilt creeping up on me.

I now know the first of my two reasons (spirituality gone wrong) to be false, though it took some work to disassociate it from the events. What you believe during unprovoked panic is rarely true or logical. The second of my two reasons (going off my medications) is harder to relinquish.

Despite hearing from my psychiatrist that I did absolutely nothing wrong and that this illness may still have happened to me had I not gone off my medications, my mind still spits out toxic thoughts: "Had I not gone off my medications, would any of this have happened?" "Why did I go off them in the first place?" "Look at what you put your family through." "Stupid, stupid, stupid."

Thankfully, and though it may not seem like it from what I just wrote, therapy is helping, and the guilt is dissipating.

As for shame, that goes much deeper. At a certain point in my illness, the panic was so bad that I had to be taken to the hospital. My daughter, her husband, and my granddaughter were visiting at the time.

My husband helped me to the car, where my daughter and son-in-law were waiting. To say I was in distress is truly an understatement. I was in tears, snot running from my nose, my chest was heaving, and a sound came from me that seemed more like an injured animal than a human being. The worst part was that my daughter saw me in that state. She was so brave and supportive and offered to come to the hospital with us. I declined. I was ashamed, broken, and wanted nothing more than to shrivel up and blow away. I felt small, like a burden to all, and unworthy of love.

Even as I write this, I am crying.

Working through my feelings of shame is hard. I felt shame then, and I feel it now, though, with the help of therapy, not as intensely. I've considered discussing this with my daughter to ask her how this affected her. Does she have residual trauma from the event? Or am I projecting my guilt and shame on her? Would I be asking her for her sake or mine?

Therapy Is a Work-In-Progress

Understanding the difference between guilt and shame helps my therapist help me to deconstruct and reprocess these and many other feelings and persistent anxiety associated with past events. I never thought I'd get as far as I have. Therapy continues to be a work in progress, and there are no guarantees. But I'm hopeful because as I heal, I am again curious about myself and my future in a way that I haven't been in a long while. I guess only time will tell.

APA Reference
Scott, L. (2022, June 15). Understanding My Guilt and Shame Is Helping Me Heal, HealthyPlace. Retrieved on 2022, November 28 from https://www.healthyplace.com/blogs/anxiety-schmanxiety/2022/6/understanding-my-guilt-and-shame-is-helping-me-heal

Talking to Others About My Mental Health
Restarting Therapy Is Harder Than I Thought It Would Be
Heide
June, 15 2022 at 8:40 am