How My Late Pup Helped Me Through Mental Illness 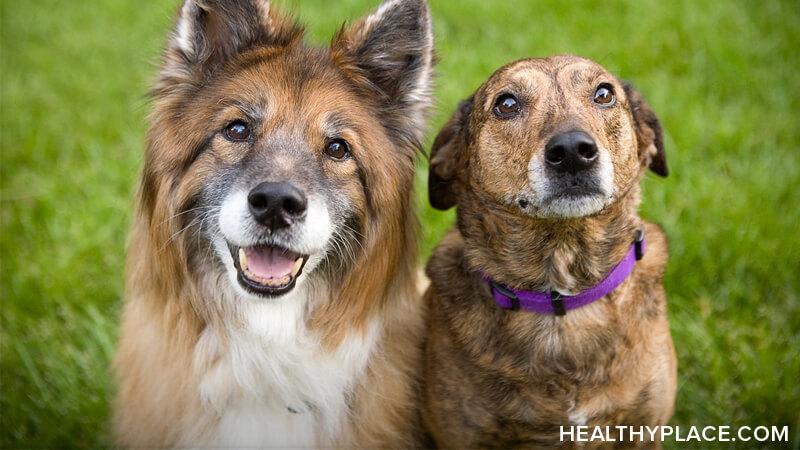 It's been over a year since I said goodbye to my sweet pup, Cannelle, a cocker spaniel. I adopted her when she was 18 months old and was blessed to have her by my side for 13 years. Throughout that time, Cannelle helped me in ways that she, of course, could not comprehend. My pup helped me through bouts of mental illness, among other things.

Like most animals, dogs live in the moment. I envy them that. Taking only what they need to survive, without baggage, demands, or judgment, dogs give us loyalty, protection, and most of all, love. Their funny expressions and behaviors make us laugh, and their hijinks—while sometimes frustrating—give us endless stories to tell others who are so inclined to listen.

Besides fish, we weren't allowed pets when I was a kid, so I had no first-hand experience. My husband and I loved animals, and though we'd had many cats, neither of us felt comfortable having a dog while maintaining our busy full-time jobs and three-children lifestyle. Still, when my brother needed to find a home for his dog—a yellow lab named Spencer—we took him in.

I loved Spencer. He proudly lived up to his breed's reputation; great with kids, fun, gentle, and loving. To my surprise, he had a calming effect on me during times of stress, which I hadn't expected. Having bonded with my husband and son, Spencer was mainly their dog, not mine. It wasn't until after Spencer passed away that I decided I wanted a dog for myself that would bond with me and be mine.

How My Pup Helped My Mental Illness

When we got Cannelle in 2008, she'd just had puppies. Her puppies were taken from her early. Then she was dumped at the pound. She was so forlorn at first, wandering around looking for her babies. It just broke my heart. Despite that and some residual signs of abuse—she was terrified of pillows and plastic grocery bags—Cannelle trusted us and settled into her new forever home. She and I bonded quickly, and Cannelle was ever-after referred to as "Mom's dog."

Animals have their own ways of communicating with each other. I believe that. While animals can't talk, through sounds or smells or their innate senses that go beyond that which we mere humans can comprehend, animals just know. Somehow, through energy transfer or whatever, Cannelle, like Spencer before her, could feel my emotions.

I remember a time soon after we got Cannelle when I was lying in bed, depressed, in the fetal position. Cannelle jumped on the bed, gave my face and head a good sniff, then curled up in a ball behind my legs. She stayed for hours. Many a time, Cannelle's warm body soothed me, cuddling me through bouts of depression and thoughts of suicide.

As for anxiety, Cannelle had a way of knowing when I was anxious. She would pace around with me, unsettled, looking up at me, imploring me to be calm. With that quizzical look from her sweet, brown eyes, and a tilt of her blonde head, she comforted me when my anxiety was on the rise.

Did Losing My Dog Contribute to My Mental Illness?

I've written many Anxiety-Schmanxiety Blog entries referencing the acute bout of panic disorder I suffered in August 2021. Cannelle's passing preceded those traumatic events by a few weeks. Perhaps losing her was the catalyst, the breaking point past which my psyche simply could not go. Reflecting on this a year later still yields no definitive answers. It probably never will. All I know is that for a blip in time, I was blessed with an amazing gift from the universe. I was gifted a beautiful, strong, loving little creature who helped me through many troubling times, who gave me far more than I ever gave her. I love you, Cannelle, and I miss you.

APA Reference
Scott, L. (2022, July 27). How My Late Pup Helped Me Through Mental Illness, HealthyPlace. Retrieved on 2022, October 7 from https://www.healthyplace.com/blogs/anxiety-schmanxiety/2022/7/how-my-late-pup-helped-me-through-mental-illness

Using the Physiological Sigh to Manage Anxiety
Reaching a Milestone in Trauma Recovery
Heide
July, 27 2022 at 9:51 am