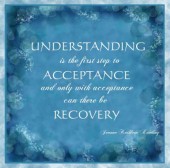 That online quiz was the Mood Disorder Questionnaire which can be found on HealthyPlace.com.

It was essential to my learning that I had bipolar disorder. Without it, I would’ve stumbled around a lot longer and my life would’ve been in shambles. I took this online questionnaire to one psychiatrist and then proceeded to get two more second opinions. The whole process took months, since it’s so hard to get into see psychiatrists. I was a wreck. The not knowing was killing me. But once I got that third opinion, I knew that I was bipolar.

I went through a period of believing that I was my bipolar.

Everything about me was due to the bipolar disorder and I felt powerless to change it. That feeling of powerlessness is so damaging. It shattered the small amount of self-esteem I had left and I second guessed myself about everything. I felt like all I could do was swallow a pill. I didn’t feel like I could change the anxiousness that I felt or the horrible depression that overtook me.

It wasn’t until I accepted that I had bipolar and it wasn’t me that I began to change.

It took constant, consistent work to get to where I am now. And where I am now is not perfect, but I don’t think that I can expect it to be. I had this idea in my head that life would be perfect once I got my bipolar disorder under control, but I was wrong. It’s neither perfect nor imperfect. Life is just as it should be.

Trading Creativity for Bipolar Medication
On a Bipolar Boat with No Paddle
Shannon Marie
August, 24 2010 at 8:09 pm

I am in the midst of 'accepting.' I always say: "never underestimate the power of denial."
It is really slow going, but acceptance is allowing me to educate myself fearlessly and things really are getting better. Acceptance has allowed me to find out what my 'better' looks like.
Well done. both the article and your progress!
~sm

I think that it is great that you have come to accept having bipolar disorder. I was diagnosed in 2002, but still hide my disorder from certain family members and friends. I just can't come to terms with accepting it. I don't know if I ever can. I wish I had the strength that you have.

John,
Just because I've accepted that I have the disorder, doesn't make it an easy thing to live with. It just means that you accept what you have to work with. It makes it easier to deal with it.
Cristina