Schizophrenia is an Illness, Not an Evil

Several years ago, I made a video in an attempt to explain the complexities of my condition (Schizophrenia). When I made this video, I was starting to successfully control my illness. Even this, however, did not quell the anger that burned inside of me towards both the world and myself. I began to ask questions. Why was I chosen to carry this burden? What did I do to deserve this?

Emotions Attached to Living with Schizophrenia 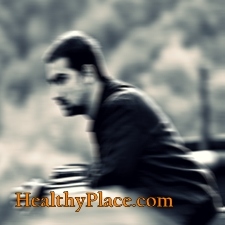 Though this anger has softened over the years, it has not disappeared. Schizophrenia is a traumatic and painful condition. Even those who are able to control it, cannot help but be forever changed because of it. We have been touched by the “other”, and are never quite the same.

Stigma of Schizophrenia: No Well Wishers For Me

Initially, when I became ill, there were no flowers or cards wishing me well, only abandonment and frustration towards me. How is it that we are supposed to recover under such circumstances? If schizophrenia was universally recognized as a disease, how many more would recover and lead better lives? Perhaps I did not deserve any sympathy. My behavior was admittedly bizarre, but surely I did not deserve the mental illness stigma behind it.

For these reasons, I produced a video explaining my condition so that others may better understand Schizophrenia. I hoped it would help quell the intense stigma of schizophrenia or help patients seek treatment. This is my story of Schizophrenia, one which millions share. This is a message of hope, a symptom of Schizophrenia that is often overlooked.

Video: Memoir of a Schizophrenic

APA Reference
Hoeweler, D. (2012, December 5). Schizophrenia is an Illness, Not an Evil, HealthyPlace. Retrieved on 2022, August 11 from https://www.healthyplace.com/blogs/creativeschizophrenia/2012/12/schizophrenia-is-an-illness-not-an-evil

Schizophrenia and Finding Answers to Obsessive Questions
The Positive Side of Schizophrenia
Alexander Crawford
October, 31 2017 at 8:16 am

This is an amazing post. I agree that sympathy is warranted.

Hi everyone, I do have brother with schizophrenia. We want take him off meds invega sustenna. I spoke with nurse, she told me it is not possiable, she never ever saw any schizophrenic living without medication. I have a lot of questions. if he will get off of it. Where we can find doctor who wil assist. Then I know he is going to get worse, possibly violent because of withdrawal symptoms, untill his body will adjust to lower doses. How do we survive that time. Is there any rehab place that can take him like for 90 days until critical time will pass.

It sounds like you have a lot of concerns over taking your brother off of medication. I personally think you should keep him on medication like the nurse said.

Thank you for sharing. It sounds like I was luckier than you in the support and understanding I got, but I still wish society and some important people in my life had different attitudes. I've been symptom-free for two years now, I hope it stays that way. Thank you for sharing your story :)

As I watch the events at Newtown as it unfolds I hope the world will look at mental illness in a new light and realize that this is an ilness that needs the attention of governments around just as any other illness.

Hopefully. Gun control for the mentally ill would definitely help in these cases.

Hi Gloria,
My son has stopped taking his medicine for over three weeks now and he seems just the same. I am praying for him and I am believing for a change. Can you please pray for me and him as I pray for you and your son. My son's name is Kirk

Hi Gloria,
My son has also stopped taking his meds for two weeks now, he says they are not helping I feel deep down that there was going to be a healing and I believed it can you please pray for us his name is Kirk

Thank you Dan Hoeweler!
I appreciate you kind words very much.
Sweden is lovely all times of year, someday i wouldn't mind moving there...
cghobbyist

Hello Dan,
I have been visiting your blog for a while. I shared one of your 'quote' on fb a few weeks ago. I am also a patient of schizophrenia. I started my blog about my illness at http://badarabbas.wordpress.com in April 2010. Since then I have shifted to other interests. This post touched my heart and it fully explains my feelings as well. I can't watch video as youtube is blocked in Pakistan for some stupid reasons. We have to face the stigma of the disease on almost daily basis. I have to face the additional stigma in that it was circulated that I somehow planned the illness to gain disability benefits. I had very very bad experience with the uniformed psychiatrists and the medication. There were some very big facts involved also (my 2nd post). I fully agree that it is a combination of hereditary and environmental factors. Personally I think that if I had not been selected in Army, I would have been gone undiagnosed. Here in Pakistan, there is a very little awareness. It is after my diagnoses that it is being talked about as I have been more than open about my illness. You are doing a commendable job in raising the awareness about the disease. I will certainly wait for your next post.

This video blew me away. I am surprised how many thoughts i have had that are mostly identiacal to yours!
I am writing about my life, and my experiences with schizophrenia, would you guys let me know if i suck at writing?. Did not know where else to ask, sorry if it seems like spam. I don't sell anything, just so you know it.
I just discovered this site, and i will bookmark it. This seems like a place for me :)
Its here: http://www.cghobbyist.com/the-early-years.html

Hello,
Yes, it is amazing how many of our beliefs are similar and follow a pattern. I read the beginning of your story, and I can tell that you are a good writer. I used to live in Sweden a long time ago, and have been to Denmark, I remember that it was very beautiful. I hope to go back and visit someday. Keep up the writing, you are good at it, and it is good for the soul!

Hi,Thanks for having this page with very important information...
I'm a mother of 19 diagnosed SMI "Squizofrenia", we had been trough many things (sleepless, voices, spys, camaras, judges voices untrust, pain, hopeless...) We were instructed and educated like this is a sickness and I believe it. But in July, 2012 my Son stop taking medicine, he said "it's not helping..." but that decision put him down more deep..., and I ask him to go to Church, I was praying every day, and I still do, but that day something happend, (was not and exhorcism like a TV show... just hapeend (many people pray for him from many places, the word was spread...two weeks after he got a job, still he is working; going to be 4 months working, and he sounds more happy, I do not know for sure what is in his mind, but he is making his own life living by himself with his cousin... I believe in God, His Power, His Mercy...

Hello Gloria,
People recover for different reasons. Is it a divine power, science or chance, I can only surmise at. I am glad your son is better.

Thanks Herb now I understand the reason why my son changes his clothes so often. He does not trust me or anyone else. It is hard for I suffer from anxiety and depression and he makes a lot of noise speaking to people who you cannot see. Your article has thrown some light on the problem.

Thank you Marrianna. I am guessing he suffers from similar symptoms as myself. It is very difficult to understand what is going on inside our heads. My next article will be published on Wednesday, which helps explain a positive aspect (seems impossible, I know) of the illness that researchers have recently found.

"Why you?" I once saw an article talking about that with reference to other bad things that happen to good people. That person resolved it with the question "Why not me?" and the implications that flow from that question many of which you allude ot in your blog. Nice work.

You have a point. In that case why not anyone? I guess everyone has issues, something that I think we often forget! It's conceited to think otherwise.