Homeless Sam: A Man With Schizophrenia Who's Homeless

Many with Schizophrenia, like myself, have experienced homelessness at some point in their lives. The experience can be humiliating and complicate the treatment and symptoms that we suffer through. It is nearly impossible to recover without this basic necessity.

Though the overall experience of homelessness was degrading, there was a certain freedom that it also allowed me. I was no longer required to enter a workforce that I did not fit into, where I often became the target of ridicule. I was allowed more freedom with my time to dedicate myself towards things that I wanted to do, even if I was limited by my financial situation. It gave me a new perspective on what was important in my life. 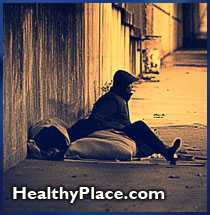 When my financial and housing situation began to improve, I confronted my past by writing a story about a homeless man who felt rich despite his extreme poverty. He measured life not by the scales of money, but by the good deeds he had performed. His name is homeless Sam, and he is the protagonist in my first published tale. Homeless Sam is named after a Schizophrenic man, who often wanders the streets of Cincinnati. On an alternate course through history, Schizophrenic Sam may not have been a tortured soul, but the one in this tale. The man that I hope he may one day become.

Sleeping outside under a bridge was an old man named Sam. He reeked of sweat and dirt and hadn’t shaven nor trimmed for months. When he smiled a yellow sulfuric gleam appeared across his face showing his yellow teeth that he hadn’t brushed in nearly a year.

Next to him was a six pack of cheap beer he purchased at the store from the change he had acquired while begging on the streets. His possessions were few, as he needed to carry all of them on him. This bridge was the old mans home for the last year, the cops kicked him out of all his other homes. Around him was a heap of garbage which included hamburger and candy wrappers, empty beer cans and dirty old clothes that had been worn out over the years.

Everyone felt sorry for Sam yet Sam never felt sorry for himself. Sam, unlike many of the homeless, chose this lifestyle. He tired of the rat race, the struggle to see who is the alpha male in the pack. He tired of the constant struggle for possessions and pieces of green paper everyone seemed so crazy about. He decided early on in his life that the most important commodity for him is freedom. The freedom to wake up whenever he wants and not be pushed around and threatened by someone during the day so he could have a roof over his head at night. He desired nothing but his freedom and love for life. He got exactly what he wanted, and nothing more.

During the day he sat at busy crosswalks in downtown Cincinnati carrying a cardboard sign asking for change. Businessmen dressed up in three piece suits walked by, sometimes willing to help with a little bit of spare change. They felt sorry for him, not having the nice car, the trophy wife and the big house they were so proud of. Others simply walked by in disgust wishing he would simply disappear.

Sam always had a big smile on his face, knowing full well he was one of the richest people in all of Cincinnati. He felt sorry for these businessmen walking by in their three piece suits wanting to control people all the time and always trying to seem really important. He knew that despite all their possessions, few appreciated life as much as he did. He lived in bliss.

Everywhere he went he saw wonder and joy, as if wearing a special set of glasses worth a million dollars. Love surrounded him like an aura of joy no rich man could ever buy. People felt sorry for him yet he wondered why. Why should you feel sorry for one of the richest men in Cincinnati?

Sometimes he would find a nice beat up old suite at Salvation Army and prance around the streets of downtown Cincinnati, feeling richer than almost anyone there. He stared at the tall buildings feeling as if he owned them all. Sam was indeed rich, yet everywhere he went people felt sorry or disgusted by him yet it didn’t bother him one
bit.

Sam lived in a world of his own, a world much greater than that of most people. He loved his life and freedom so much he couldn’t imagine selling one hour of his time to a factory or company. Every now he would sit down grabbing a quick bite to eat and start crying, out of happiness and joy about how wonderful his life is.

He felt compassion for those beneath him, the people slaving away hour after hour, collecting green pieces of paper he knew little about. He wondered every now and then if somehow he could help these lost souls he sees everyday walking through the city, in a rush over creating some object or thing that is worth green paper. If only he could teach them how beautiful life is if you just stand back and watch it. Convinced few of them would listen he decided to instead have the glory and beauty of life all to himself.

Sam loved his freedom more than anything on this planet. Freedom was more important to him than money, power and fame. He is living the American dream that most Americans can’t even dream of, the dream of endless freedom. Freedom so great that no number can take away or convince him otherwise.

Sam is the wealthiest man in Cincinnati.