At least not until I was put on an antipsychotic medication with a rare side effect of causing obsessive thoughts. Then, not only did I have to deal with symptoms like hearing voices, but my generalized anxiety disorder morphed into a deep well of obsessive thinking with no bottom. Schizophrenia and obsessive thinking is a tough pair to deal with.

Schizophrenia And Obsessive Thinking With Fixations

It started with fixations. I remember obsessing over whether I had locked the 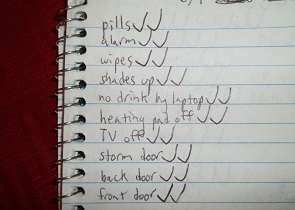 That’s when I started making lists.

It started with making a list for when I left the apartment. Things on that list included:

I’d make sure of all these things and then make a checkmark so that later I could refer to the list and the checkmark would let me know I’d taken care of that particular item. I realize they are all perfectly reasonable things to check before leaving the house, but keeping the list was quite cumbersome, especially if I was carrying things out the door with me.

I started keeping a list for my car, too. Items on that list included whether the doors were locked and the lights were turned off. This list was even more cumbersome. Again, it was especially hard if I was carrying something, which I usually was.

But it wasn’t just obsessive thinking and making lists. I washed my hands all the time because I may have picked something up off the floor or touched something that had a chance of being dirty. Sometimes I didn’t think I had washed my hands correctly, so I washed them again and then worried about everything I had touched after I had first washed my hands.

Schizophrenia And Obsessive Thinking Is Ending For Me

It was clear that I needed to change my antipsychotic, so I did. I’m not fully recovered from obsessive thinking, but I’m doing a lot better. I’m not making lists anymore. And I don’t freak out over a miniscule stain on my shoe or about whether my tights are too shiny. I’m learning not to care as much if something falls on the floor or into the sink. Life is getting better. I just need to keep my eyes on the big picture, and not get caught in the web of little details.

Medication Changes for Schizophrenia and Schizoaffective Disorder
Why My Schizophrenic Psychotic Episode Still Matters
Danny
April, 27 2017 at 3:17 am

Howdy! Someone in my Myspace group shared this site with us so I came to look it over.
I'm definitely loving the information. I'm book-marking and
will be tweeting this to my followers! Wonderful blog
and superb design and style.

My son is struggling terribly right now.. He has bipolar and was manic recently. He also has severe ocd, intrusive disturbing thoughts continually. What antipsychotic does not make ocd worse. He is delusional and psychotic from the mania. Antipsychotic seems to worsen the ocd. Can't find doctor who understands his debilitating ocd is.

Keep looking for a doctor. You will find one who understands the situation.

I have bipolar and OCD, some of the things you do/did sound like me. My symptoms are, thank God, not disabling, but they sure are irritating and time consuming. I hope switching meds solves it totally for you.

Thanks! I hope so too!