Why I Chose Mental Health Activism Over Political Involvement 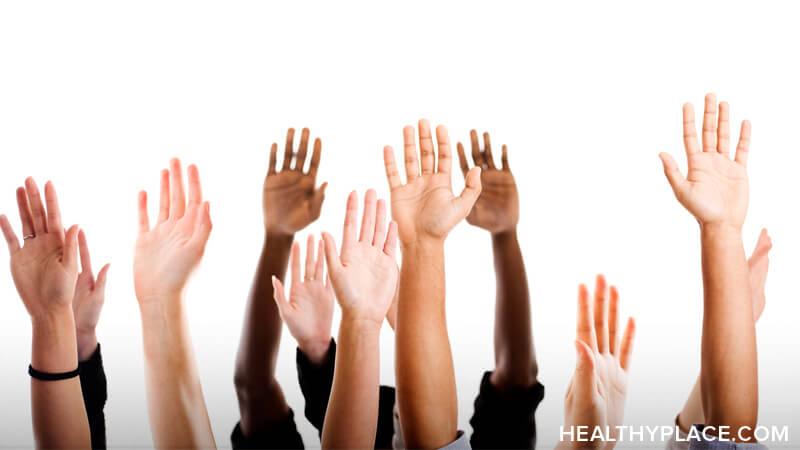 I usually do the National Alliance on Mental Illness (NAMI) Walk every year, but this year it falls on our second honeymoon when my husband Tom and I will celebrate our 10th wedding anniversary. So I’m doing a fundraiser for NAMI Chicago on Facebook instead.

Mental health activism has gone from being my main issue to being my only issue. I’ve been so depressed and anxious that I can barely keep my head above water, let alone tackle the problems we’re facing as a country today. Since Donald Trump getting elected kicked off my schizoaffective depression, it’s because of him that I don’t really have the energy or money to fight his policies.

Last year, I was doing everything I could besides march and protest—the loud crowds kick off my anxiety (Noise Sensitivity: When the World Is Too Loud). I called senators and our elected officials in Congress urging them to reject cruel health bill after cruel health bill.

These days, like I said, I barely watch the news. I have to live my life, and getting torn apart by those in power gets in the way of that. I do vote—last month I voted in our primary elections. I only knew of a few people running whom I voted for, but it’s important to vote even if you don’t know who every candidate is because even if you only vote for two people you know, it makes a difference.

Also, since our apartment building doesn’t recycle, I’ve started bringing our recycling over to my parents’ house. They do recycle.

Mental Health Activism Includes Taking Care of My Schizoaffective Self

I’m not much of a feminist these days. I didn’t renew my subscription to my favorite feminist magazine because I want to save money, but I do read issues of it at my local library and I do still subscribe to my favorite magazine about bipolar disorder.

Quitting my job due to schizoaffective disorder really made my political activism take a hit because I can’t donate to causes I care about. But, as I’ve been saying, I do what I can. I do my best to raise money for NAMI, I support an independent publication about mental illness, and I write for this blog.

I also believe that taking care of myself is in and of itself activism. You can’t pour from an empty pitcher, as the saying goes. I’m doing my best to take care of myself first so that I can take care of the things that matter to me, such as NAMI and this blog.