Traveling with a Child with Mental Illness

Even before Bob was diagnosed with mental illness, traveling with him was almost unbearable for our family. My son typically had meltdowns while packing. He hated airports and flying. The uncertainty of it all drove Bob's anxiety passed his limits.

When Bob was 12 years old, he was diagnosed with bipolar disorder. During that time, our family was in crisis. Bob's psychiatrist patiently prescribed various combinations of psychiatric medication in order for Bob to achieve stability with his moods. Our Florida spring break vacation had been planned months in advance, so we went: big mistake.

Children with Mental Illness and Travel 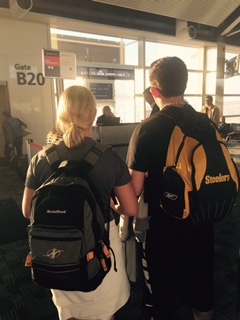 Like a roller coaster ride, our vacation began by building up to the big drop. I had a full itinerary of park visits and meals-out scheduled. Granted, Disney World was not the best choice for a child with severe social anxiety. It was hot, humid, crowded, loud and overwhelming. Still, I was determined we would all have a good time.

The first day we spent at an amusement park, Bob walked around mumbling incessantly about his suicidal thoughts. By mid-afternoon he could take no more. We went back to the hotel, but the noise and throng of kids at the pool provided no relief.

The next day, intent on his goal, Bob marched smartly from the parking lot to the entrance of the next park on our agenda. Halfway to his goal, Bob's anxiety got the best of him and boomeranged him back to the car. I knew little about Bob's mental illness at the time, so I took him back to the hotel again.

I spent several days in that hotel with Bob, in the dark, while his sister and dad had fun. Bob watched television and ate to-go meals I brought him from the hotel restaurant. Finally, I cried uncle and we flew home early, vowing to never take another family vacation again.

Six months later, I took Bob with me to visit my elderly mother in California. Bob's teen mood disorder was now mostly stable but his anxiety was worse than ever. I still didn't know how to deal with my son's crippling anxiety disorder, so I did whatever I thought might work. Bob wanted to spend all his time indoors so I locked him out, forcing him to join me at the pool. When Bob sat on a park bench and wouldn't budge, I went for a walk on the beach, knowing his intense separation anxiety might compel him to follow me, and it did. By the third day, Bob's anxiety decreased and he didn't want to return home. Yay.

We have since taken many family vacations learning from experience what works best for Bob. We make accommodations so he can push through his fears. Bob talks with his therapist ahead of time so he has a plan when his chronic anxiety or mood disorder flare up.

Tips for Traveling with a Child with Mental Illness

I have found the following things work with my son:

This year, we went on a beach vacation for spring break. Bob said it was the best vacation ever and I have to agree. We had a few unexpected hiccups, but Bob and I handled them well. I am already planning our next vacation with a few changes that will make it more tolerable for Bob and enjoyable for the whole family.