Childhood ADHD and Lying: Be Careful What You Punish 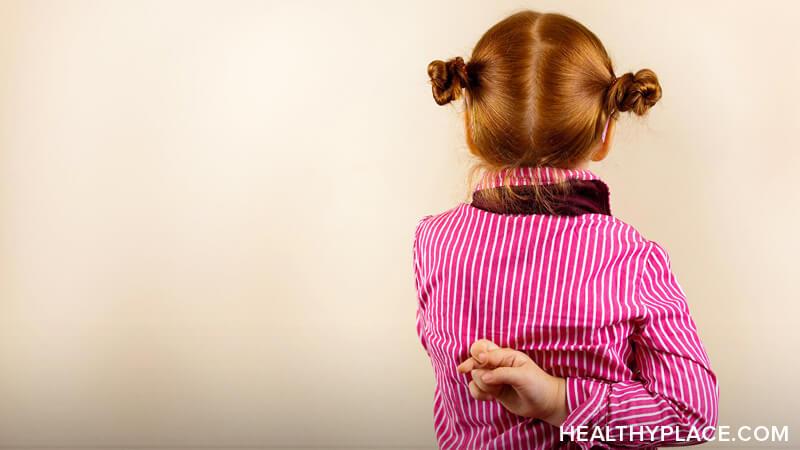 Of all behaviors associated with attention-deficit/hyperactivity disorder (ADHD), lying is one of the more frustrating. My son's therapist recently reminded me of something important, though. Lying serves a purpose, and punishing our children with mental illness for the lie itself may mean we're missing the underlying issue all-together.

It feels like my son lies constantly. He lies about whether he walked the dog or did his homework. His stimulant medication wears off around bedtime, and then he gets so hungry that he often steals food at night. He then lies about this when confronted with the rotted remnants we find in his room.

It's incredibly frustrating. After he stole cash from a family member, we'd had it and asked the therapist how to stop the behaviors. This led to contemplating how they began.

Children with ADHD struggle with everyday tasks, yet we maintain the same expectations for them as we do for other children. When they can't meet those expectations, they're punished. Children like my son are aware they can't do these everyday tasks. This may lead to anxiety and depression. It also leads to lying because that's one way to meet expectations.

When I tell my son to do his homework, then come back later to ask if it's done, he'll immediately say yes--even with incomplete homework sitting in front of him. He says yes because he wants to meet my expectation and doesn't want to admit that he can't. He feels shame that his distractibility and disorganization prevent him from completing a "simple" task. It doesn't help that his younger sister completes her homework in half the time then tries to help him with his.

Lying and Lack of Impulse Control

"Bad" behaviors are easier. My son can earn money by doing chores, but chores don't get done if he can't pay attention or organize tasks to even start. When my son saw money lying around, then, stealing it was an easier option. When asked about it later, he said he hadn't thought about how it would affect the person from whom he stole. He just thought it would be nice to have money to buy snacks.

Lack of executive functioning is a huge part of ADHD. It's behind poor problem-solving skills. It causes an inability to connect cause with effect or remember past consequences. My son knows he gets punished for lying and stealing but, in the moment, all previous punishments don't occur to him.

How to Respond to the Lying That Results From ADHD

Disciplining a child with ADHD is complicated. When I punish my son for a symptom outside his control, do I run the risk of him believing he's punished for being himself? Rather than punishing his lies, I realize it may be better to focus on taking away the motivation to misbehave. Until recently, though, I hadn't even considered what my son's motivations might be.

It was a break-through, then, when I finally asked. He'd come down from an angry outburst after getting punished, and I asked what he'd been thinking when he lied. He said he hadn't been thinking anything. I asked if he'd considered consequences, and he said he hadn't until after he'd already lied, then he had to keep lying to avoid punishment. This was a relief, in some ways. He's not a "bad" kid. He's a kid who struggles with ADHD.

Knowing this hasn't "cured" the lying, of course, but it did change my emotional response to it. In other words, just as GI Joe would say, "Knowing is half the battle."*

*I may have just aged myself with that one.

APA Reference
David, M. (2017, September 25). Childhood ADHD and Lying: Be Careful What You Punish, HealthyPlace. Retrieved on 2022, August 19 from https://www.healthyplace.com/blogs/parentingchildwithmentalillness/2017/09/adhd-and-lying

Melissa David is a mother based out of Minnesota. She has two young children, one of whom struggles with mental illness.The support and wisdom of other parents proved invaluable to her in raising both her children; and so she hopes to pay it forward to other parents via Life With Bob. You can find her on Facebook and Twitter.
A Year of Shock Therapy for Major Depressive Disorder
Suggestions for Sleep Problems in Childhood ADHD
Jason
March, 10 2019 at 11:28 pm

Troy why dont you find another venue to spew your pilitical malarkey. These are serious issues with our children and they need help ,we need help!

I read this article and I totally agree with everything in it. What is very upsetting to me is to try to convey to a child that honesty is the best policy no matter what, yet we've elected a President that has been everything but, HONEST. It doesn't make sense to a child for sure to know that you can be a liar and still be the most powerful figurehead in the world today.

Great read on a very frustrating topic. Here is a key point: "He says yes because he wants to meet my expectations and doesn’t want to admit that he can’t." -- even as adults how often do we find ourselves following this same kind of behavior? It's so important (even if difficult) for us to take a step back and realize the stem of this behavior. Lying is a particular trigger button action but if we can remind ourselves that with kids and ADHD it's usually stemming from a place of not wanting to disappoint. This opens us up to conversations about how we'd rather our child be honest with us (and meet those expectations!) than lie and try to fill the others. Letting our children know that we value their honesty more than the end goal on things can help both parent and child find some common ground.