The Other Side of Psychosis

I’ve survived episodes of major depression, mania and anxiety, but none of them changed my perception of the world as much as my three month battle with psychosis at the age of 18.

All mental illness carries its own difficulties and stigmas, but I feel that there is a special sort of stigma that is created by psychosis. Whereas most mental illnesses are hidden, psychosis is in your face, impossible to overlook, unpredictable. It changes you and changes the people around you.

A Special Sense of Purpose 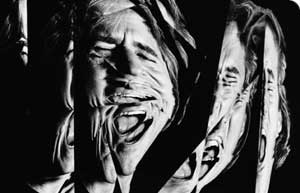 Every person experiences psychosis in their own unique fashion but some of symptoms I experienced during my drug induced psychosis were feeling as though my thoughts were not my own, that I had supernatural powers, that I was communicating on a higher level than others, that I was chosen and had a special purpose in the world, auditory hallucinations, visual hallucinations, extreme arrogance and self-importance, intensely argumentative, flight of ideas, intense anxiety and panic attacks, extreme paranoia and quite simply feeling as though my mind was literally breaking into pieces.

The most difficult thing for me about overcoming psychosis was admitting to myself that all those things I saw and felt were not actually real. The world wasn’t actually as bright and colourful as I thought it was. I didn’t actually have supernatural powers. I could not simply make a phone call and have a helicopter pick me up. I was not actually a famous rock star with legions of fans who would drop everything to fight on my behalf. I wasn’t the most intelligent person on Earth or the best writer the world had ever seen.

The Walls Start Closing In

When the smoke finally started to clear, I was violent, out of control and locked in a highly secured psychiatric hospital. I had no money, I had no job and most of my friends were terrified of me. I was lost, confused and alone.

Psychosis is mental illness in its most extreme form. And it is heavily stigmatized against for people in general do not understand it.

Part of this reason is the linguistics of it all. Psychosis, psycho and psychopath are very similar words and I feel that many in the general public use these terms interchangeably. People also seem to think that once you ‘lose your mind’ that you can never get it back.

Over the years, I’ve often got the impression when I tell someone I suffered from psychosis that they felt as though I could again just lose my mind at a moment’s notice. That I was a ticking time bomb, just waiting to go off. But this could also be due to our natural tendencies to mind read, and self-stigmatize.

I’m happy that I experienced psychosis. I believe that I understand the world and myself just a little bit more as a result of it. I feel that I’ve experienced what the human mind is truly capable of.

The more people who have suffered psychosis come out of the shadows with their stories, the better we can fight the stigma of psychosis. Yes, it can be a terrifying prognosis, but recovery is entirely possible.

Even though the world isn’t quite as bright and shiny as I thought it was, reality is a great place to live in.

APA Reference
Curry, C. (2012, November 12). The Other Side of Psychosis, HealthyPlace. Retrieved on 2022, August 19 from https://www.healthyplace.com/blogs/survivingmentalhealthstigma/2012/11/the-other-side-of-psychosis

Hi there,
I love way of thinking from dr Ferati. I wish to contact him and talk about my son's problem. If it possible to have his contact details?
PS. Chris, you doing great job.

Hello Zara. On behalf of Chris, thanks for taking the time to read this piece.
It's great that you've connected with Dr. Ferati's words. I recommend replying directly his comment on this post as he should be notified when that happens and may give you his contact details. Or it might be worth Googling his name to see if you can find how to reach him. :)

I'm really in a predicament. I had ADHD as a child. I was given a myriad of medications at only five years of age that caused psychotic symptoms. My parents were amidst a divorce and didn't know how to distinguish this from an average hormonal teenage boy. They sent me to special schools where I was bullied. My psychosis was fueled by marijuana at 17 but I felt so good that I continued to smoke through the symptoms and consequences of mental illness. I am now 26 with no sense of identity and no education. I know I have very few prospects and am not able to hold conversations with people. I have violent thoughts now but would not want to hurt anybody except myself. If I ended up in jail, I'd be killed instantly anyways. I am the meekest man you can imagine. I get treated with zero respect by everyone I meet. There is no hope for me. Assisted suicide should be available to the mentally Ill so crimes don't have to be comitted to get us the death penalty.

Hi!
I hear your pain and struggle. Please do not lose hope. You are not a burden or a threat to others. It sounds like you need intense therapy and a strong support system. There is ALWAYS hope. The human mind and spirit is DESIGNED to work towards recovery and wellbeing. Your brain has neuroplasticity. Your mind wants for you to heal and be well, believe it or not. It is working for you. Keep reaching out, doing what you can to help others (that will also help yourself) and let your natural body's wisdom take over. Your mind WANTS to heal, and can heal spectacularly. Your thoughts might be creating a low vibration or false beliefs about yourself that impeed your healthy interactions with others. You DESERVE RESPECT. Let your mind heal and work its natural wonders (the mind can also be a miracle) by letting your body take over. Trust that in a few months' time, things will get better. and in a few years time, who knows how wonderful things might be for you. You have a lot to offer the World. DO NOT LOSE HOPE. the universe is on your side. recover your hope and senses. stay true to yourself and be your own shining light. find the light. it is within you. sending you so much love and hope and blessings. you will recover.

I enjoyed reading your blog. I have had psychosis off and on for years. I have made the choice to give up the meds now as didn't feel they were working and yet I was getting all the side effects.
It's a scary place to be and to try and describe it to others when you haven't a clue what's really going in or who you can trust is frightening.
I have depression as well on and off so that doesn't help either.
I'd love this to go one day as quick as it came!
Any advice from anyone about how to live without meds would be really helpful.

But is there a medication treatment for psychosis? My 16 year old needs help and the doctors are not taking him seriously. They are just sedating him with high doses of seroquel XR. He is already on Effexor for anxiety and Vyvanse for ADHD. Help. Some of these drugs can cause psychosis, can they not? No one is taking us seriously.

Hi Brenda,
I understand your frustration, but unfortunately I cannot speak about medication issues as I am not a doctor. I urge you to get a second opinion if you believe he is experiencing side-effects from the medication. Apologies that I cannot go into more depth.
Chris

Thanks for your thoughts on this topic which is too close to my heart right now. I was in a terrible psychosis in April and was banished from the barn where my dear horse, Jack, was stabled. He was truly my therapist and my best friend on earth. (my dysphoric mania started when he was injured) I had paranoid delusions and did raise my voice at someone but was never and never have been violent. I had premonitions about a barn fire and three days after I was banished, the barn and all the dear horses including my beloved Jack perished. I was accused by the owner and later cleared by the investigators, but the lies went viral and many still believe them. It has been so horrible to lose Jack and then to have others believe that I did such a heinous thing has been beyond devastating. My psychiatrist wants me to get another horse because he says he has never seen me do as well as I did when Jack was in my life. There is no replacing Jack; there just isn't and also the rumors are still so thick that I can hardly face even trying to have another horse--or more to the point, being around people who could stigmatize me. I just feel so shattered and so, yes, stigma is very real. Thank you again.

Hi Caroline,
Thank you so much for sharing. I can't even begin to imagine your suffering. I do hope that you get another horse, but of course, it will only happen when you are ready. Thank you, again, for sharing this deep and personal experience. I wish I had some monumental advice for you, but I do not. Just keep on, keepin' on. And remember what made you happy . . .

Once more an original description of psychosis as serious and frightening mental disorder, Mr Curry. In this case, I would to stress the fact that psychotic disorder exhibits the beast side of human mind that in disguise form all mentally heath people performed it through daily activities. Besides this conclusion, it ought to add the necessity of systematic exploration of disarrangement mind of any psychotic patient, in order to improve antisocial conduction as most moody danger to mankind. Indeed, each person has got the aggressive drivers, which ones along psycho-social maturation of respective person soften, in accordance to socio-cultural deeds to concrete social milieu. But in this complex process of maturity and development of personality occur different abnormality that cause many interpersonal contradictions and conflicts as well. Mostly of these abnormalities are of psychotic nature, such are the feeling of mistrust, disobedience, doubtful,hatred, hostility and so on. The same should to sublimate in positive and social acceptable feelings, in order to increase the understandings between peoples as respectable members of every community. Otherwise, we would continued to live in the world overloaded with misunderstandings, oppositeness and hostility between people and nations.

Thank you for the comment Dr. Ferati. I appreciate your passion for the field!