Positive Thought: You Can Walk the Walk

or, How Not to Mistake Phish Food for Your Self-Esteem

There's a lot of talk about positive thinking and its links with self-esteem but little that talks about tone. This made me feel really stupid, when I couldn't seem to think my way out of my mental illness. 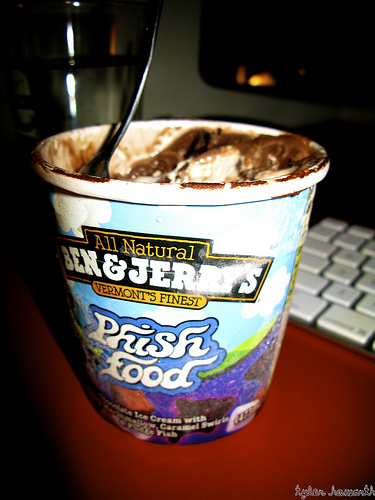 Tone, however, is relatively easy to adjust. Even when thoughts themselves won't just switch out of negative gear: These days I can be thinking that the world is gonna end, that my heart's racing, I'm out of control, and why am I so tired again?? But it's OK, OK enough because my mental tone isn't equating that with absolute truth.

In part that's a little tweak on my seriously black/white thinking: The grey's in the tone.

I decided I probably wasn't ever gonna be the sunshiniest person in the room, so if it isn't all rainbows and Pollyanna, it still works for me.

But I still have a mental illness

My brain won't stay healthy if all I do about said illness is read Cosmo's guide to personality liposuction and talk a good game.

There's no substitute for fully supporting and engaging in my own recovery; If I could think like Doris Day I'm sure I would have started by now, but the daisies are tasty and I tend to fall over when I skip in the rain.

I happen to believe the power of positive thinking is enormous. It just won't take away the fact that my brain tends towards depression/anxiety - it needs more than the average bear.

If you tell yourself you're a nervous wreck, a fat useless #InsertInsultOfTheMonth, a failure, then those things are probably going to be fairly self-fulfilling. If you tell them to yourself sufficiently many times, you'll definitely think they're true - which is perhaps worse than anything if they're really not.

Calm has a fighting chance if Gunnery Sergeant Hartman quits with the back-seat driving.

Changing the tone I use with myself has affected the way I am with myself. I think it's called compassion, but it's also about being able to be more than just the anxiety or the major downer I have going at any particular moment.

It's not even that big a shift in terms of attitude. Probably more about changing my immediate reaction to what was happening inside so that even when I was totally freaking out - when I dropped the panic in my own mental tone, that worked.

CBT, self help techniques have more of a chance when you aren't pressing so hard on the anxiety accelerator-- Oh and I so totally have one of those in my head! But anyway, obviously the easier you go on the gas, the easier this gets.

You can cope with panic, you can deal with stress, you can even keep going when you're fatigued, triggered and depressed because you know where the accelerator is. Our minds are a lot like muscles - they get pushed and pulled and yeah, they get worn out.

Make your thoughts a little more your own. Take care of them. Take the time to tone them, too.

I relate to this. I've learned to laugh at myself a little and say things like, "You know you've got social anxiety problems. Don't have such an ego, please. Everyone else is thinking about themselves, too." Or, "Come on, now. Stewing and worrying won't help you out of this. You need to do something concrete." I've found that when I talk to my own hurting self the way I would to a struggling friend, in an honest but encouraging manner, I usually do all right. It took a very long time and two therapists' help to be able to treat myself like a friend and to (mostly!) silence that hollering drill sergeant you speak of in my head.