After I've done the relaxation thing, settled into the new day, or the new year (yikes! already??), sometimes I'll feel like I'm just left hanging. Wondering, what next in some sort of weird limbo state that's neither here nor there. Not exactly anywhere.

And seriously, what's next? Today. Tomorrow. Next year.

Live in the moment: It’s the only one you have

If that sounds a little new-agey - it is. It's also a nice dream to hold onto. And it isn't all bull: Some of it's useful bull.

I throw it in there with the mix of anxiety coping tips and tricks. Some of it sticks. Just enough to remind me that everything in moderation works. If you make it work.

That's the hard part. It's one thing to know the ways to cope, and quite another to have a darn clue how to use them effectively in my life. Treating anxiety can feel so much like two steps forward, one step back.

“The world is what you think it is”

In terms of mental health, that's more or less true. Most days less - my ability to implement the sentiment can be a little low but I guess I believe it enough for it to prop me up along the way.

What do you think? Is a little bull such a high price to pay if it works, from time to time?

So long as it doesn't get in my way. And I think it does get in a lot of people's way.

I think that the new-agey, self-help movement is so much like the diet industry that it often leaves folks with nothing but the idea of a cure. That's not much, when you think about it.

I've tried the self help books and what not, and they have their place. Like I said: Sometimes a little bull goes a long way. I need to titrate the doses pretty carefully, though. Keep my eye on the big picture, which is recovering from PTSD and depression, and staying in charge of that.

It's a matter of perspective.

Rather than yo-yoing between the latest, greatest positive total mind-body self-fulfillment and rejuvenation therapies that promise what they knowingly can't deliver: lasting results.

Want to know where stability comes from?

How calm becomes part of your daily life? 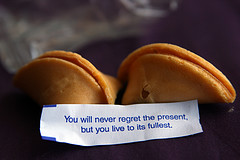 You go at it with an arsenal of knowledge, a truckload of tools and more than a few skills and supports provided by as many people and theories, hopes and practices, as you can find.

It isn't available in the next edition of New Scientist, nor is it sitting on a bookstore shelf lined with similar tomes that tout the power of positive thought, personal choice and aspirational psychology. That stuff is the soda pop of psychology

--It's tasty. It'll give you a quick boost. Sometimes that's all I'm in it for, but it isn't the answer. And it certainly isn't the way to cure anxiety or depression.

Make 2011 the year you find the tools and supports to treat anxiety.
Happy New Year, everyone!

Anxiety is an universal our emotional daily experience. Therefore, it is not possible to overcome this unkind psychologic state. This is component part of life. For all that, this didn't mean that we should to fall victim to many spiritual suffering. Perhaps, we should understand the anxiety as an great opportunity to reinforce the sense of self-confidence as well as to regain consciousness on the complexity of the world. Definitively, each of us have to know that things have in same time their dim side. Everyone, also possess oneself vices. Since people and things create all the occurences, then 2011 will be simultaneously distress year.