Running on adrenaline, cortisol -the fear center of the brain staging neurochemical warfare on your nervous system- is the equivalent of climate change. It's dangerous. It's doing your whole system damage you can't even see: Forests for trees.

Anxiety: I can't stand it anymore

Anxiety alters the way our minds and bodies respond to stress so that it's harder, in the long term, to return to a state of calm and restfulness.

And it does: change. Eventually, it tires you out. Sleep, wake, whatever, it's all the same at some point because your body has stopped reacting to its own signs of stress; It knows only too well. 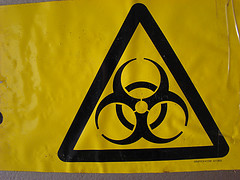 Where you can, you'll intervene. Major, minor, somewhere in between. Do some more exercise, eat less "junk" food, pretend you can meditate, distract thyself with 101 Ways to Balance a Life that's so thoroughly imbalanced you wonder how you're walking upright. Some days you're not. Some days it's a matter of prying open your eyelids, and holding yourself up until the world just falls away.

I think you can do something about emotional pollution (panic and anxiety at extreme doses) but it isn't fast. It requires a vast commitment, and a decision to never give up. No matter what's going on for you, nor why.

It also means that clearing one's mind, preventing the toxic build-up of anxiety and stress, is sometimes going to take precedence over everything else. Which is hard, and not always possible; There are real world responsibilities, other factors, that may mean there's no going back.

Panic: When surviving the thing itself creates a harmful state

Coping with a mental illness is kind of like holding a jar of toxic waste in one hand, while being asked to go about your days like anybody else. And if I think of a panic attack as the mind-body equivalent of an A-bomb, it's not far off.

Sometimes I just want to tell people who try to help, who've never actually had a panic attack, to let me deal with my fear and anxiety on my own terms. In my own way. When I'm ready.

I want to say: Don't treat a disaster like a disaster - it's already bad enough.

Because it's rare that anybody actually does treat a disaster like a disaster, if you look at the way people behave in crises. For the most part, most people get on with things as best as they can, under the circumstance - provide for the basics: needs, versus wants, that sort of thing.

That's what treating anxiety is; Nothing more, nothing less.

Anxiety: Have You Ever Felt Safe?
When Anxiety Spells Doom: How Harold Camping Makes Us Doubt Ourselves
pamela prater
May, 16 2011 at 5:11 pm

i feel toxic tonight i have panic attacks from hell im wking to save the hungry and the homeless.and im actutually living it. have i lost my bloody mind.

Kate :-)
As always, you've got the thinker in me going at a zillion miles an hour ;-D
"...holding a jar of toxic waste in one hand while being asked to go about your days like anybody else" -- Yes, that's what it is often like ...
Thanks xo