Psychiatry is a Tool. Use It.

"The meds don't work!" I hear it a lot. From rational people. It's shorthand, a way to tell me that psychiatry has failed them. Unfortunately it's also used as a vantage point from which to argue that psychiatric medications are universal bunkum. I find this insulting; It implies those taking medication for mental health issues are at least a little clueless, prone to hypochondria. One step barely removed from calling the lot of us hysterics. So much for a century of scientific research and advocacy.

Part of me sighs in resignation and wonders if the people making these claims of conspiracy-grade quackery have ever seen a Venn diagram. Then I start to think about more helpful ways we can talk about the science (or lack thereof) behind psychiatry and how to use it to treat anxiety and improve mental health. 'Cause what are we talking about here? It isn't abstract. It's will I take this drug this morning or shall I just not bother?

Anxiety and psychiatry: Do you feel misinformed? 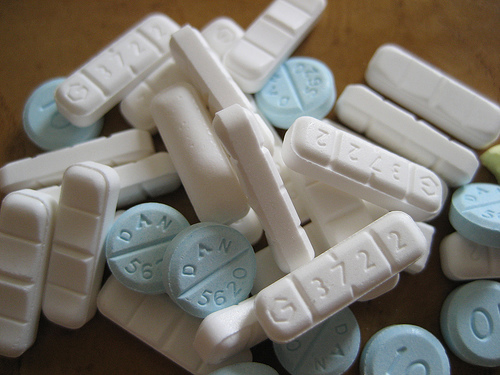 Psychiatric medication clearly works for some people some of the time. It isn't all Big Pharma. But I think many people on meds do feel uninformed or deliberately misinformed when it comes to the psychiatry of their mental health. The natural response is to want to hit back however it's important not to mistake feeling for fact. Reliable evidence is normally pretty thin on the ground when you look at the scientific studies and try to apply them to your own case.

The side effects of psychiatric medications are a real issue. Real enough for class action lawsuits which get a world of press. Of course it's far quieter in the land of 'my drugs worked'. Doesn't make for great headlines. Nobody announces it. Why would you? Someone's just as likely to pat you on the head and say that's nice. Anecdotal, but nice.

Treating anxiety: The importance of risk versus reward

Of course it's anecdotal. So it's not empirical evidence, I wouldn't float your boat on it but it doesn't hurt the case still to be made. I'm not saying shut up and swallow psychiatric propaganda like it's straight from God's mouth to your ear but do test these things for yourself. And do so with that idea of risk versus reward in mind; To what extent does the potential downside of psychiatric medication raise your absolute risk of harm versus the already active, ongoing harm caused by anxiety and poor mental health?

But do the meds work??

We don't know how psychiatric medication works in most people. Just like we don't how general anesthetics work at the molecular level but how long have we been using them to our advantage?
It's a matter of not having enough science to prove the theory. That doesn't mean it's wrong. Doesn't make it right either but if I didn't fully consider the potential risks against the potential rewards of all options available to me now, today, 2011 then I'd be downright foolish. Worse I'd have narrowed my perspective on the entire debate before I'd even begun.

My Crazy Meds Are Crazier Than I'll Ever Be: Psychiatry, Anxiety and Depression
Anxiety Denied Is Not Anxiety Extinguished
Kathleen Slattery
July, 23 2015 at 3:20 am

Nobody is coerced into taking psychiatric medications, and if an individual is vehement concerning their lack of success rate, by all means they should not consume the drug(s) in question. It is all about checks and balances; and for me, the benefits outweigh the potential risks. Plus while it is true that psychiatry relies primarily on the administration of psychiatric drugs, does that make it any different from any other specialized field of medicine? Not really. The gaining of some extra poundage is preferable to me than the alternatives I would probably face if I were to fall ill again.

Psychiatry as medical branch is supported, in first line, by psychopharmacotherapy to which depends the successful treatment of mental illnesses. Even exist many sceptic viewpoints in their efficacy, they has made great advancement in the treatment of psychiatric entities. Their usage should be based to current recommendations of clinic psychopharmacology, in order to achieve the optimal treatment effect. Otherwise, they may be dangerous to patient whose they are prescribed. However, psychiatric treatment of psychic disorder should be integral ones. This mean, it ought to combines the medication with many psychosocial interventions, which increase therapeutic score of psychiatric medications. This hopeful statement, besides others benefits, has to augment the responsibility of respective patient to itself disease, that imply the regular taking of remedies for long-lasting time. These and other features of psychiatric treatment would improves the healing scores of mentally ill patients, that will reason the main role of psychiatry in satisfying treatment of this category of patients.

Whilst psychiatric medication is indubitably not for everybody, and indeed has proven to be harmful to many, what I cannot abide about people who are anti-medication and/or anti-psychiatry is the frequently arrogant and dogmatic assumptions that their experiences must trump those of people who have had positive interactions with both psychiatrists and the drugs they prescribe.
I'd be dead without the intervention of medication, and probably without the intervention of a specific psychiatrist for that matter. Call it placebo, indoctrination, blind faith etc if you will, but I know it's not :)
Thank you, Kate, for being one of the few professional bloggers I've encountered in this arena for presenting the value of this side of the coin :)
Pan x

hi Rossa
thanks for your comment.
yes quite i took a little literary license with the headers though really i am speaking about the institution of psychiatry. albeit focusing on the medication side of things for the purposes of this post -i've a word limit, would that it were not so. :)