Unfortunately, unconditional love has a razor sharp edge that will make you bleed. It could even kill you. Nothing is stronger than love. So wasting your empathy on an abuser by affording him or her with unconditional love can be your death sentence.

Can You Love the Pain Out of an Abuser?

Victims of abuse stay trapped in the abusive relationship for many reasons, and many of the reasons relate to love and/or empathy for the abuser.

It doesn't seem to matter how mean and nasty their abusive partner acts toward them or their children. Deep down inside, the abuse victim feels that their love will somehow win over the abuser, cause the relationship to settle down, and make the abuser return love to them (and the children, too). The feeling that love will conquer all is especially, and almost exclusively, true when the victim of abuse stays in the relationship because they empathize with the abuser's past or present pain.

Empathizing with the Abuser

Recently, I read a story in which the victim of abuse, in this case a woman, wrote that she wanted to gain some strength so she could take her children and herself out and leave the abusive relationship. Then she wrote, "I keep in mind that he is sick. He was raised with emotional, verbal, and psychological abuse, and around alcoholism. It's not his fault."

No, it is not the abuser's fault that he "learned" how to abuse other people. How we're raised can affect us for a lifetime. Sometimes, abuse in childhood sets the stage for mental and emotional disorders later in life. Indeed, how we're raised, how we're shown to act/react, and the examples of how to behave we're given as kids can really screw us up. (Read: Domestic Abusers: Perpetrators of Domestic Violence) 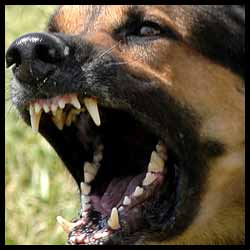 Perhaps it isn't the abuser's fault at all that she or he abuses. But at what point does it stop mattering if the abuser's behavior is their fault? Where do you draw the line? Why is it so hard to say, "No more abuse. You're old enough to know how to act and I'm not putting up with it anymore!"

The answer is different for everyone; predicting when (or if) you will say "enough is enough" is impossible. I'd like to leave you with a story. Take from it what you will.

It's Not the Puppy's Fault!

Imagine that your children had a puppy. They loved the puppy with all their hearts, and so do you! Every time you leave the puppy alone at the house, a stranger comes in and trains the puppy to fight without you knowing it. The puppy becomes more and more aggressive with you and the kids. One day, you come home early and find the puppy in training with the stranger. The stranger tells the puppy to attack your daughter, and it does! The stranger gets away. Your daughter isn't hurt too badly because you got her out of the way in the nick of time.

One day you come home and the puppy breaks through the front window of the house and, bloody and crazed, comes after you and the kids. You all jump back into the car to be safe. You call the police to complain about the stranger who's been training the puppy to fight.

You KNOW it isn't the puppy's fault that he's so aggressive. You know and remember the playfulness of his once gentle spirit. But the potential result of the puppy's training is that he will eventually catch one of you by the throat. You love the puppy for everything he was and everything you hoped he'd become. But the puppy is too dangerous to have around your home. You didn't make the puppy that way, but the training is too strong for you to change him. You must let him go, even though it hurts.

I need help .I am in an abusive relationship. I know I should leave and I don't know why I stay..its been very hard and I've no self esteem left .

Hello Trenia, I am Cheryl Wozny, one of the authors from the Verbal Abuse in Relationships blog. I am so sorry to hear about your situation, but I am very glad that you found the courage to reach out to someone and seek the help you need. Depending on your location, you may have a wide variety of resources in your community. You can start by visiting our page for Referral Resources here: https://www.healthyplace.com/other-info/resources/mental-health-hotline-numbers-and-refer…. I wish you the best of luck getting the support you need to help your situation.

It is like the current quote circulating "hurt people hurt". No, hurt people are typically mindful of what it feels like and are hyper vigilant NOT to hurt. Hurt people who hurt others are making a choice. Every choice has a reward or consequence. When a choice that should have a consequence is rewarded, it continues until a consequence is in sight.