Borderline Personality Disorder: Does It Get Better?

Recently I was hospitalized for depression. Another patient, who had just been diagnosed with borderline personality disorder (BPD), found out about this blog and asked me "Does it ever get any better?"

The answer is yes, but not quickly.

A common but difficult diagnosis

According to the National Alliance on Mental Illness, BPD is not as well-known as bipolar disorder or schizophrenia but is just as common, affecting 1 to 2 percent of the population. An estimated 10 percent of outpatients and 20 percent of inpatients have BPD. It commonly co-occurs with other psychiatric disorders; in my case, schizo-affective disorder depressive type, alcoholism, and post traumatic-stress disorder. The co-occurring diagnoses often make BPD complicated to treat. 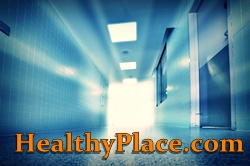 In spite of this, BPD has a good prognosis when the patient is receiving proper treatment, such as dialectical behavior therapy (DBT) or schema therapy. It's worth noting that schema therapy can work even if DBT fails. I went through DBT and did not improve; I was in the hospital more often than I was out of it. I was eventually court-ordered to schema therapy at the borderline unit at Laure D. Carter Memorial Hospital in Indianapolis. I spent nine months at Laure Carter, and gradually improved. I now live in my own apartment (with some oversight by mental health technicians), work as a freelance writer and am rarely in an inpatient setting. I was a hopeless case that found a way out.

BPD does not, however, clear up quickly. I was in schema therapy for about two months before I started seeing improvement. A study by Farrell, Shaw and Webber is interesting; the study divided subjects with BPD into two groups. One group received treatment as usual (TAU); the other received TAU plus schema therapy. After 8 months, 94 percent of the schema therapy group no longer met criteria for BPD, versus 16 percent of the TAU group.

In other words, it is possible to get better if one stays in therapy and works long enough.

The problem is people with BPD tend to want an immediate cure. That's part of the nature of the illness. We have to learn to accept that treatment takes time. As the old saying goes, "Good things come to those who wait." Like it or not, there is no quick fix. The Serenity Prayer is helpful here; we must have both the serenity to accept that treatment takes time and the courage to stay with therapy even if we don't see results.

It is hard to wait, but worth it

The patient I mentioned earlier told me "The more I learn about BPD, the more I hate it." This feeling is understandable--BPD is a horrible illness that considerably affects one's ability to live life.

When I first started schema therapy, I was known for storming out of group therapy in a rage. With time, however, I was able to stop that and stay, even when upset. I learned how to speak up for myself when I was hurt or angry (the two often went hand-in-hand). I learned how to calm down when upset. Even if I hadn't learned anything else in schema therapy, these skills alone would have considerably affected how I dealt with my BPD diagnosis.

It is hard to wait. According to the Ferrall/Shaw/Webber study, 25 percent of the TAU group dropped out (versus 0 percent of the schema therapy group). Dropping out of therapy common for people with BPD, partly because of the difficulties of the therapeutic relationship, partly because therapy can seem painful and ineffective. But it is definitely worth staying with it. I recommend keeping a journal so you can look back and see how you used to be versus how you are now.

Borderline personality disorder does get better if you work at it. You are worth the wait.

APA Reference
Oberg, B. (2011, September 20). Borderline Personality Disorder: Does It Get Better?, HealthyPlace. Retrieved on 2022, June 25 from https://www.healthyplace.com/blogs/borderline/2011/09/borderline-personality-disorder-does-it-get-better

Counter Catastrophizing: The Self-Destructive Nature of Fear
Borderline and Self-Acceptance: Loving the Hidden You
borderline
April, 15 2012 at 5:33 am

And I might add that i'm afraid to reveal my condition to most because i'm afraid they will run the other way in fear.

I hate being BPD. My family doesn't understand. I'm an adult so they think I should just be able to deal with it & get over it. My family does not believe in mental illness. I'm trying to remove negativity from my life but I can't just cut off my family. I rely on them for so much, especially as a single mom. It's hard for me to stay consistent with my recovery. I make my doctor's appointments & keep on the meds but doing the homework & journaling is challenging......with two small kids that i'm barely able to care for, i'm exhausted by the end of the day! I haven't been able to stick with the DBT stuff because of these factors. It feels like i'm doomed never to get better. I feel like I have this label above me that nobody understands & there is no solution for.

I'm sorry things are so rough. Hang in there. Things do get better.

I agree wholeheartedly that BPD makes it difficult to stick with therapy, or any method of recovery. I'm impressed (if that's the right word) with your attitude; I find it so, so difficult to give things time to work. I've had many counsellors, but have only found progress with one, after I was forced to go for almost a year. Time, sadly, doesn't seem to be a kind thing to the BPD brain. Personally, I find waiting for recovery or improvement torture.
Unfortunately, DBT isn't available in my area, nor is schema therapy. However, I'm finding daily medication does help with the more extreme sides of BPD.

I'm sorry these therapies aren't available in your area. Sometimes a great deal of "luck of the draw" location is a determiner in what treatments are available. I actually relocated from one county to another to get schema therapy, but I wouldn't recommend that for everyone. At least the medication is helpful. By the way, it has been shown in medical studies that mindfulness meditation changes the shape of the brain--perhaps this could be useful? A good library should have books on this. You might also want to order the book "Reinventing Your Life" by Dr. Jeff Young, the creator of schema therapy. You can find it on Amazon.

I'm proud of you. Patience is definitely an ally, most mental illness resists quick fixes. There is a lot "magical thinking" associated with the healing process - meds, experimental procedures, talk therapy "breakthroughs" - as if wellness came at the end of lightning bolt. As is so often the case, truth is less dramatic, but ultimately more satisfying. The secret weapon is work - brave, steady, resolute. Nothing rewards like persistence.

Thank you. You're right in that there is a lot of "magical thinking"--that seems to be ingrained in our culture. It's especially true when it comes to mental illness; if I had a dime for every time someone thought I could "snap out of this", I'd travel the world. The truth of the matter is that recovery takes time, both for physical illness and mental illness. BPD is no exception, and eight months (as in the study I cited) is practically light speed for such a severe mental illness. Developing the diagnosis takes time, so it's logical that healing would as well. The funny thing is, when I was at Larue Carter (where the study was performed), the process seemed so gradual I almost didn't notice it--which is why I recommended keeping a journal. I guess in hospitals you have plenty of time to get better--I sure did!
You're right--work is the weapon, and persistence is the secret.