It hurts to have borderline personality disorder (BPD), especially when trauma is a factor. However, people can cause what's called secondary wounding--that is, they can hurt by a person by their reactions when he/she turns to them for help. In her book I Can't Get Over It, Dr. Aphrodite Matsakis writes "Some victims reported that their secondary wounding experiences were more painful and devastating than the original traumatic event."

Why people cause secondary wounding 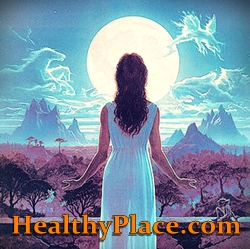 So how do we heal from secondary wounding?

First, we identify what we experienced, then distance ourselves emotionally and mentally from it. This enables us to survive others' insensitivity--it may bother us, but it won't destroy us.

Second, we realize that as a general rule, the secondary wounding says more about the other person than us. This is often the result of a larger problem in society, such as the "just world" philosophy and the blame-the-victim attitudes. When you view it from this perspective, we have an argument against their assumptions.

Third, we learn positive self-talk. It is vital for us to have our arguments against secondary wounding experiences ready. We can counter that internal voice that repeats what we so often hear from others.

Secondary wounding is painful. The fear of rejection common in BPD makes it even more so. But we don't have to be victims all over again. We can overcome it.

I've been suffering with this disorder for years,cutting myself at around 14 and I was reckless, got into drugs n alcahol and it was hell for a long long time in and out of the hospital,I've been thru so much I wouldn't even kno where to begin Its just comforting to know I'm not alone in this thank you

BPD is a complex disorder but secondary victimization is a double entendre.

The information provided serves as a nice reminder that mental health issues are often viewed as character weaknesses, which is clearly wrong. That particular line of thought is a dangerous one because access to high quality treatment is impeded by ignorance. That said, however, there is a thin but vitally important line between promoting accountability as opposed to promoting perpetual victimization, which is often a permission slip for those with health issues of any kind to refuse to do the work necessary to facilitate healing. Innocent victims start out as just that but adulthood brings human beings to a place of justifiable accountability barring, of course, those who are truly incapable of helping themselves in any way. Victims who victimize and use their own pain to justify it are as dangerous as those who caused the original damage.

I hear you!! In my case the secondary wounding comes from those in the mental health profession. They accuse me of things I never did nor ever would do and generally treat me with complete disdain and lack of respect based on those lies and the diagnosis. I am still shaking in disbelief after a hellish emergency room experience a week ago.