Borderline Personality Disorder and the "I Let It Happen" Myth

It's a myth as old as trauma--"I let it happen." It's easy to believe it and blame ourselves for the trauma that led to our symptoms of borderline personality disorder (BPD). But it's a myth that can be very destructive, and we need to realize that.

It must be my fault 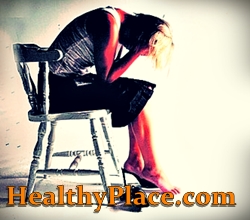 One co-occurring myth is "It must be my fault." Simply put, this myth teaches us that the trauma was our fault.

That's not true. No one voluntarily chooses to be a victim. A victim is someone powerless to prevent a traumatic event.

I see this often in child abuse survivors or sexual assault survivors. The child abuse survivor may believe he or she is bad, and that's why the abuse happened. The sexual assault survivor may believe one of many of society's myths about it being the victim's fault. But in both scenarios, a more powerful person took advantage of a less-powerful person. The fault lies squarely on the perpetrator, not the victim.

It is understandable to have some self-blame; we don't want to admit we were powerless, nor do we want to believe bad things happen to good people. Sadly, those are facts of life--we are not always in control.

We may argue with some merit that we bear some of the blame--for example, if we were raped while drunk. But even then, no one asks to be a victim. It is not your fault.

During a traumatic event, we have one of three reactions: fight, flight, or freeze. Fighting back can often leave us injured worse than if we had cooperated. Flight can feel like cowardice, and can backfire if we're not fast enough. Freezing, the least understood of the reactions, especially contributes to the "I let it happen" myth.

The truth is that our response comes down to which chemical is released at the time of the trauma. Adrenaline enables us to fight or flee, while noradrenaline causes a freeze reaction. We have no control over which chemical our body releases, hence, it is not our fault whether we fight back, run away, or completely freeze up.

When I was sexually assaulted in 2002, I froze. I could not fight back, nor could I run. I blamed myself for a long time--to some extent I guess I still do--but I also know that I was caught off-guard. By the time I realized what was happening, it was too late to prevent it. And that was not my fault.

You may find yourself with similar beliefs. But hindsight allows us to view the trauma with multiple different endings. You acted the way you believed best ensured your chances of survival, whether that was fighting back, running away or freezing up. Your reaction was instinct, something you have no control over. It was not your fault. You did not let it happen.

There's a saying, "The longest 18 inches in the world is the distance between your heart and your mind." The longer I'm in therapy, the more I agree. While we may know something intellectually, it's another thing to know it emotionally.

The first step is to know the truth in your head. You keep saying said truth until you're sick of hearing it, then you continue saying it. Meditate on it. Read about it. Time and hard work help bridge the gap to the heart.

I'd be lying if I said it were easy. But the peace you find once you succeed is incredible. The hard work is worth it.

APA Reference
Oberg, B. (2012, June 19). Borderline Personality Disorder and the "I Let It Happen" Myth, HealthyPlace. Retrieved on 2022, August 10 from https://www.healthyplace.com/blogs/borderline/2012/06/borderline-personality-disorder-and-the-i-let-it-happen-myth

An Open Letter to My Addiction
Twice Scarred: BPD and Secondary Wounding
Billy
July, 18 2012 at 7:59 pm

Okay. I am the husband of someone I think has BDP. We have been married for 12 years. All the sudden 2 years ago she left me and took our three children to her parent house about 20 minutes away. After about a month she started sleeping with someone else when I had the kids on the weekends. 6 months later she filed for divorce. The the hell began. Constant calling, coming back to our house in the middle of the night. At our hearing on the divorce she gave custody of our son to me and kept our daughters. She lived in an apartment by herself while our daughters stayed with our parents. The she canceled the divorce and I agreed. Then two weeks later she filed again!!?? Started see the other man again. But then started the late night terror with text messages, suicide threats, showing up in the middle of the night and letting herself in. Waking up our son. Waking me up. At this point I am sleep deprived. I am having problems at work. Week after week for months. We cancel the second divorce filing. But still the same behavior from her. I didn't understand it. When she didn't want to talk I left her alone. When she wanted to come home I let her, every time. I fed her, took care of her, held her so she could sleep. Anything I could think of. Then she filed for divorce again. Third time. Still the same behavior from her. She recently wanted to cancel the divorce again. This time I was not so quick to agree. I thought she would just do it again. After about a week, she completely cut me off. No contact. I am lost. I am moving forward like we are divorcing. Our son still lives with me, our daughters are still at her parents. I am fighting for custody of the girls. But, I still love her. I want nothing more than this all to stop and for my wife and children to come back home. What can be done? I am at a loss. I don't know what else to do but abandon her an move forward with only my children. Please help. Please. Please. Please???????? Please give me some insight.