Remembering the Loss on Halloween

Regardless of whether it has pagan or Catholic origins, Halloween is a time of year to remember the dead. For example, my church takes a moment to remember our members who have died - two of them by suicide. So, in honor of Halloween or All Saints Day or whatever you call it, here are the life lessons I've learned from death.

Lesson One: Service has a healing power.

Some people are more naturally drawn to community service than others, and I'm one of them. I've found that sometimes it helps my psychiatric symptoms. Getting outside myself and doing something for others helps me in return. 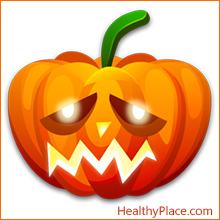 For example, I became severely depressed after Hurricane Katrina struck. I wondered where God was in all of this. At about the same time, I received an e-mail inviting me to Biloxi, which was 90 percent leveled. I jumped at the chance.

I found God in Biloxi. I found him in the actions of people who were helping. One couple--I never got their names--cashed in a trip to Las Vegas to go help on a supply distribution line. Other people who had lost everything donated the supplies they didn't need to those who did need said supplies. God was present in the actions of the helpers.

As Mr. Rogers said, "When I was a boy and I would see scary things in the news, my mother would say to me, 'Look for the helpers. You will always find people who are helping.'"

Contrary to the song, suicide is not painless, neither for the person who attempts or completes it nor for those left behind.

I've known several people who've committed suicide, and I have no answer as to why. I probably never will. True, most of them were suffering from mental illness and I know firsthand the pain that it causes, but I still have no answer as to why they decided to end it all. It's hard enough to lose someone to natural causes, but suicide leaves those left behind with more questions than answers.

In the interest of full disclosure, I've attempted suicide three times. Once was in the midst of a psychotic episode, the other two times were in the midst of a situation that I believed would be ongoing since no end was in sight. I've since learned that more often than not, the situation is temporary even if no end is in sight. Suicide is almost never worth it.

There is nothing wrong with seeking help. That kind of pain one can recover from. But suicide leaves a hole that is never filled.

I'm a big believer in making the most of every day because we don't know how many we'll have. Life is too short to be miserable. Take your meds, stay in therapy, and do what you are able to do to enjoy life. Fight your mental illness with whatever means you have.

It won't always be possible to be upbeat. Depression makes it almost impossible to get anything done. But it is possible to learn how to find the good in every situation, and to overcome your depression through medication, counseling and coping skills. Honor the ones you know who didn't survive their mental illness by becoming determined to face yours.

APA Reference
Oberg, B. (2013, October 29). Remembering the Loss on Halloween, HealthyPlace. Retrieved on 2022, December 8 from https://www.healthyplace.com/blogs/borderline/2013/10/remembering-the-loss-on-halloween

Mental Health Patients: When the Right to Privacy Hurts
Many Believe Prayer and Bible Study Can Cure Mental Illness
Maggie
October, 31 2013 at 3:41 pm

Thank you Becky for this post. I am glad you are still with us! All of you matter, you are not your illness as you so skillfully communicated. Especially like this: "Life is too short to be miserable. Take your meds, stay in therapy, and do what you are able to do to enjoy life. Fight your mental illness with whatever means you have."