I'll be blunt--Indianapolis is my city, and I love my city, warts and all. Recently a dominatrix-turned-political-activist was selling books at the farmer's market I frequent. Long story short, I now own an autographed copy of Spanking City Hall by Melyssa Hubbard. The book is a delightful romp through the world of kink and the lawsuit designed to stop it, ultimately culminating in a triumph of the little guy. I've learned many things from this book, including why sex should be safe to explore, why it's important to stand up for yourself even if it doesn't look like you've got a chance, and how some people just go out of their way to undermine you. These are all great lessons for a person with borderline personality disorder (BPD) to learn.

Sex Should be Safe to Explore

I'm not talking about diseases when I say sex should be safe; everybody knows that. But what I am saying is that there should be no stigma to being a sexual minority. Like it or not, there is still a stigma to anything other than heterosexual, missionary position sex. Hubbard sought to change that by teaching people to embrace their sexuality, conflict and all, in a safe and consensual setting.

You're probably wondering, "How does all of this apply to people with borderline personality disorder?" The answer--people with BPD often suffer from sexual confusion, such as whether they are gay or straight. Some also suffer from gender identity disorder, feeling as if they are one gender trapped in the other's body. People with BPD internalize the stigma attached to having a sexual identity other than straight, which makes their symptoms worse. That's why the rate of suicide and substance abuse is so high in the gay community. It needs to be seen as okay to have a different sexuality.

I have my own religious beliefs about sex, but I have no right to enforce them on others, especially since one can't choose one's sexuality. My political beliefs--all consensual sex between adults should be acceptable. We owe it to ourselves and each other. Do I like it? No. That's my right. But I have no right to infringe on someone else's consensual lifestyle when it isn't harming non-consenting others.

Standing Up for Yourself 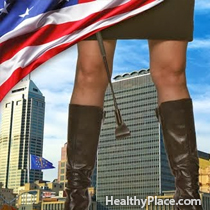 Many people with BPD have trouble standing up for themselves. Hubbard, who, to my knowledge, does not have BPD, stood up for herself at great personal cost. Even though her business was legal and no security threat to the nearby school, the mayor decided to shut her down for possibly violating a zoning ordinance.

Most people would have rolled over and paid the fine. Hubbard decided to hire a lawyer and fight back. It was draining and she saw a therapist and took medication to get through it. The city finally dropped the lawsuit, but Hubbard had become politically active.

"We are the domme," she told me. "The City is the submissive. They work for us."

To some people with BPD, this is a Copernican shift in worldviews. We are the domme; they are the submissive. The more we stand up for ourselves, the more we control our symptoms and our treatment. And people with BPD need to control their illnesses and have a voice in their treatment.

Some People Go Out of their Way to Undermine You

Hubbard was betrayed many times, both by the government seeking to control her life and by people within the kink community. The scene that sticks out the most to me is when she asks a protesting church lady, "What have I ever done to you?" That's a question useful for people with BPD to ask when facing someone determined to undermine their recovery.

Some people go to extremes to undermine others. They don't need a reason, although they usually manufacture one. As anyone's Facebook page can show, some people are just addicted to drama. Alcoholic's Anonymous recommends that you see these people as sick, ask yourself how you might help them, and treat them with patience. But there has to be a limit. I personally draw the line of what I put up with at direct physical harm--you can insult me and try to bring drama into my life all you want, but the second you put hands on me, it's over.

An Open Letter To My Former Church About Mental Illness
BPD and Romantic Relationships: If You Really Loved Me
Bill
April, 13 2015 at 3:40 pm

I know Melyssa Hubbard. I have known her for a long time, way before this book came out. Trust me when I say that if this book is remotely close to all you know about Melyssa Hubbard, then you know absolutely nothing about her.
And that, in the immortal words of Forrest George Gump, is all I got to say about that.