BPD and Three Signs You're in an Unhealthy Relationship

Recently I was talking to a volunteer from a domestic violence shelter and I asked if calls had increased since the Ray Rice video was made public. The answer was yes, because awareness was being raised. According to HealthyPlace, women with mental illness are at a greater risk of being abused. So I decided to write about signs of an abusive relationship, how domestic abuse can affect a person with borderline personality disorder (BPD), and the warning signs of an abusive relationship via the Domestic Violence Screening Test.

Sign 1: Blaming Your Actions for Their Unhealthy and Abusive Behavior

A person with BPD is very well acquainted with guilt. We feel guilty about everything, and often try to compensate. For example, we may be coerced into unwanted sexual behavior after an argument. We may accept a beating just as we accept getting up in the morning. We may meet any demand, no matter how unhealthy, because we're terrified our abuser might leave us. It's not logical, but it's real. 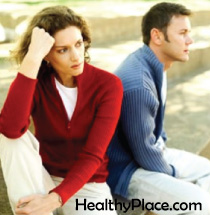 If you have borderline, you may feel as if your partner calls you names and puts you down because what they say is true--if we don't see the positives in ourselves, how are we going to fight back when someone points out the negatives? We may feel we provoke the yelling and screaming. We may feel they are jealous of our other relationships because we're unconsciously flirting with others. We may even feel responsible for any physical violence, especially if we're survivors of childhood abuse--the classic "They beat me because I'm bad" scenario.

Sign 2: Your Partner Threatens to Commit Suicide to Keep from Breaking Up

I survived an abusive relationship. When I broke it off, he called me the next day to tell me he'd attempted suicide. I refused to talk to him, he blamed me for it and hung up. There is always a chance that your partner may make good on this threat, especially if you try to leave. You have to decide for yourself whether or not it's worth the risk.

As people with BPD, we are especially sensitive to this threat. We may feel responsible for their attempt or completion. Nothing could be further from the truth. We are acting in self-defense. We are standing up for ourselves. We are making a healthy choice. We need to remember we are not responsible for the unhealthy behavior of others.

This can be in real life or online. Your partner may tell you who you can or can't be friends with on Facebook or other social media sites. Your partner may prevent you from seeing or talking with friends and family. In some cases, they may use social media to keep constant watch on you or demand--or even steal--your passwords.

This control can even extend to mental health treatment. My ex's favorite threat during fights was, "If you don't calm down I'll have you I.D.ed (Involuntary Detention, or a 24-hour hold)!" People with BPD are especially vulnerable to this threat. We need to remember and act on the fact that anyone who tries to control our mental health treatment does not have our best interests in mind.

How to Leave an Unhealthy Relationship

This is probably the most difficult thing one with BPD can ever do, but it's worth every second of anxiety. When I broke it off with my ex, within minutes it felt like a huge weight had been lifted. However, I had to go into hiding because he threatened to kill me, told me how he was going to do it and efforts to get the mental health system involved failed.

Leaving is the most dangerous time of the relationship. I cannot recommend strongly enough to go to a shelter; it will have security that a friend or relative's house won't have. You can find a list of shelters on the National Coalition Against Domestic Violence website. Many shelters are pet-friendly (my ex threatened to let any pet I got starve if I ended up in the hospital), and almost all of them have some form of counseling available.

APA Reference
Oberg, B. (2014, September 16). BPD and Three Signs You're in an Unhealthy Relationship, HealthyPlace. Retrieved on 2023, January 27 from https://www.healthyplace.com/blogs/borderline/2014/09/three-signs-your-relationship-is-unhealthy

3 Ways to Educate People About Borderline Personality Disorder
Beauty for Ashes: Finding Peace Amidst the Pain
Char
September, 29 2014 at 11:17 am

I have BPD and finally got the courage to get rid of my drug addicted and abusive husband who lost his job and lied to me for a week pretending to go to work. He was caught stealing from work. He has never held a job longer than 1 year since we got married 14 years ago. Now that I'm trying to start fresh I'm getting text messages from him threatening to kill himself and that his life isn't worth living.

For me it was vice-versa. BPD wife did exactly the same things to me: blaming, suicidal ideation, control. Psychopathic.