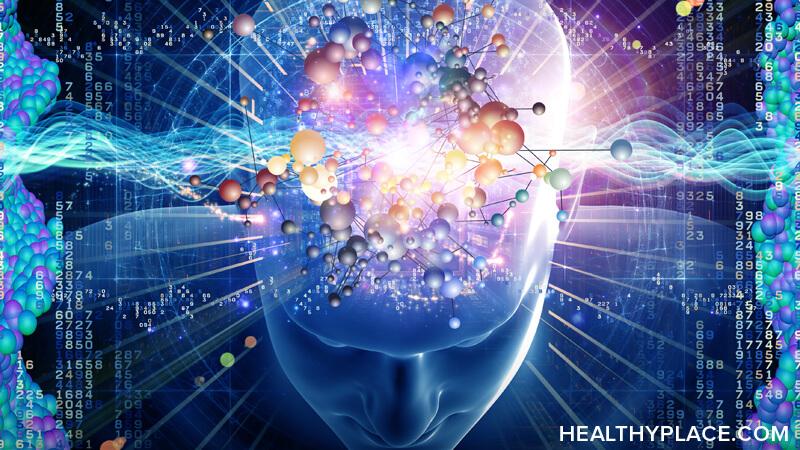 But there's a major error in this thinking that people, my previous self included, fail to recognize -- yes, bipolar disorder is in your head, but the part of your head it's in is your brain. Of course, psychology plays a part in bipolar disorder, it's critical, in fact, but the biological aspect of bipolar disorder has to be dealt with first before psychology even has a chance.

Why Would Someone Think They Could Outthink Bipolar Disorder?

I'm a smart gal. I'm also an intellectual. And I can tell you that my intellect has protected me and healed me from many of life's difficulties. And on some level, I really thought it could do that with bipolar too. I didn't understand why my brain couldn't control my brain. I mean, there's so much pop psychology that tells you that you can "turn that frown upside down." There are so many lifestyle "cures" for depression (although not so many for bipolar) out there. And it really doesn't help that some people say they have actually done this. It doesn't help that there are people out there who claim to have "cured" their own mental illness just by using a certain philosophy, religion or thought process. It doesn't help that there are people out there who capitalize on this very real desire and tell you that they can teach you how to do it, too.

So it's understandable that people have this notion that they can outthink bipolar disorder because they want it so badly, and people around them affirm that it's possible.

But the trouble is, and the thing that everything from bad psychology to a charlatan isn't telling you is that bipolar disorder is (partly, and importantly) biological in nature. The brains of people with bipolar disorder simply aren't the same as the average person's brain.1,2 Asking a sick brain to fix its own sickness isn't logical. It's like using a broken car to get to a mechanic or asking a surgeon with broken hands to operate. It only makes sense when you don't understand the nature of the illness. And, unfortunately, it can also make sense to a sick brain. (Keep in mind that anosognosia [a neurological lack of insight] -- common in bipolar disorder and schizophrenia -- keeps people from realizing they are even sick.)

In the end, it's quite simple -- until you start to address the biological issues behind bipolar disorder, you can't hope to deal with it effectively psychologically. Yes, this means taking medication. If you're in an acute bipolar episode, there are few other options, and you need to understand and internalize that.

You Can't Outthink Bipolar Disorder, But You Can Use Thought to Fight It

All that being said, while you can't outthink bipolar disorder, you can think against bipolar disorder once your biology is being addressed. That means that things like therapy are, indeed, very important. Learning about different coping skills that incorporate how you think and act really matter.

So if you've had the idea that you should be able to outthink bipolar disorder, take heart -- you aren't the only one. I know the pressure I put on myself to make that work, and I know how much I beat myself up for not being able to make it work. If you're in that state right now, I get it. But please stop beating yourself up for not doing the impossible. I'm relieving you of that burden right now.

What it comes down to is understanding that bipolar disorder is big and scary, and you can't fight it alone. You need weapons in the form of doctors and medication. It's only once you arm yourself that way that thinking has a chance. And you will need every ounce of controlled thinking you can muster because the biological weapons alone rarely work either. So while you can't outthink bipolar disorder, you can fight it, and you can even, from time to time, win.