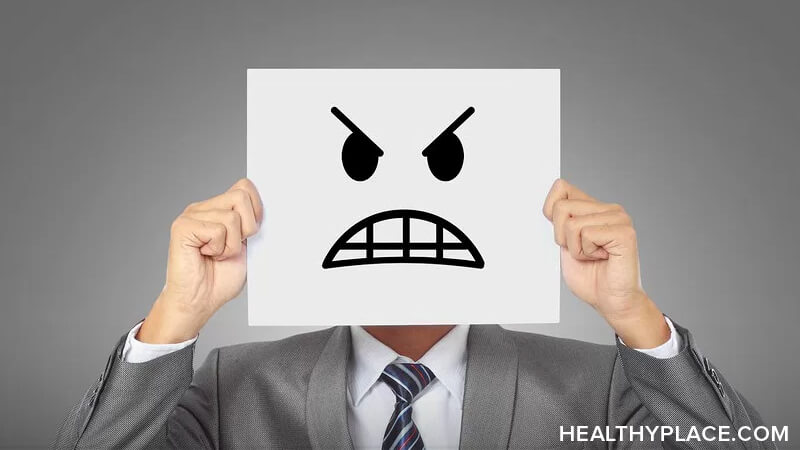 Depression as Anger Can't Be Allowed to Continue

It's not surprising that anger and rage can be extremely detrimental to a person's life, not to mention their psyche, so it's not something that can be allowed to run rampant. It will hurt you and it will hurt the people around you if it's not brought under control. In fact, I have heard from many people with bipolar disorder and many of their loved ones who talk about anger being a topmost concern. "Bipolar rage" is practically famous. And while not all of this anger and rage can be traced back to depression, some of it can.

How to Handle Depression that Appears as Anger or Rage

The most important thing to do, in my opinion, is to recognize anger for what it is: a superficial emotion hiding deeper suffering. Yes, the angry brain is trying to protect you from feeling that suffering, which is laudable, but that suffering is real and needs to be dealt with. Getting in touch with the depressed mood -- actually looking for it, as insane as that sounds -- can help alleviate the anger. So try to look within yourself and find the depression dwelling deep inside your being. It will want to hide and you have to be brave to look for and find it.

After that, if you've done it well, you're left with the depressed mood. Is that really a step forward? I guess that depends on who you ask, but I suspect it would be considered positive to the people you were previously taking the anger and rage out on. And for me, I'm always about getting to the bottom of an emotion rather than staying with its superficial manifestation.

Treating Depression as Anger or Rage

The good news is that treating the depression also treats the anger and rage. They are intertwined. One study shows that adding citalopram (Celexa) to a mood stabilizer decreases anger attacks in people with bipolar disorder.1 Psychotherapy can also help you deal with your depression as anger or rage.

So, if you have bipolar depression (or even bipolar mania or hypomania, for that matter), consider the idea that you're not really angry. Consider that the anger is a manifestation of illness that needs to be addressed and treated. Remember, you are not a bad person for feeling anger and/or rage, it may be very tied into your illness, the only bad things are the actions you choose to take because of those feelings. Make those actions positive by learning coping skills and getting treatment -- just like for any other bipolar symptom.

Talk to your doctor about it. Talk to your therapist about it too. That can help everyone in your life, including you.

APA Reference
Tracy, N. (2021, April 8). Depression that Appears to be Anger or Rage -- How to Handle It, HealthyPlace. Retrieved on 2022, December 7 from https://www.healthyplace.com/blogs/breakingbipolar/2021/4/depression-that-appears-to-be-anger-or-rage-how-to-handle-it

Anger or Rage Can Be Depression in Disguise
How Depression Can Cause Vaccine Refusal
R
April, 17 2021 at 11:19 pm

That’s a very trite response to anger.
If only it was that easy

Natasha Tracy My wife is bipolar we have 2 daughters 14 & 15 it has been a living Hell for the last 10 years plus , My wife when she goes Manic throws things acusatory of me having relationships with my business piers , stalking them , I have tried everything a person can try with many different rehab facilities , when she gets out ok for several months then the cycle starts again , I will take any expert advice out there to help my family

Hi Wallace,
I'm sorry to hear that things have been so difficult. With the information you've given me it's hard to say what's needed.
For example, what's happening with her medication? Is she taking it as prescribed? Does she need different medication? Can she have special medication to take just at the time when a mania starts to bring her back down? What does her psychiatrist say about her cycle?
Also, does she want this cycle? What are her wants? If she doesn't want it to change, then I can't imagine it will.
Is she in therapy? What is her therapist's take? Why are things okay "for several months" and then the cycle starts again?
Would a separate be best for your daughters? Is it healthy for them to be in that environment? Would it be better for them to see their mom primarily when she's well?
Basically, there are two possibilities. One is that your wife is doing something to sabotage her wellness either because she likes the mania or because she hates the treatment, likely. If this is the case, I don't think there's anything you can do except create explicit boundaries and follow through with them.
The other possibility is that her treatment legitimately isn't working. If this is the case then her doctor needs to make substantial changes and plans need to be put in place for when/if the mania happens again.
I can understand wanting to stay in a marriage and I can understand wanting to keep a family together but that may not be the best thing for all involved. If you haven't already done so, I recommend family therapy for help in working some of these issues out and putting a plan in place for the next mania.
I wish good mental health for you all.
- Natasha Tracy