Schizophrenia is an illness that causes intense pain and distress for its victims. In our suffering, we can seek solace and relief in ways that can worsen our symptoms. Some of us will turn towards drugs and alcohol in a desperate attempt to dull our pain. I, myself, was one of those individuals. Initially, I used alcohol as a way to cope with the pain that I experienced due to my schizophrenia symptoms. This temporary relief came at a great cost, however. Inevitably my illness worsened and my path towards recovery became more difficult.

There are recent studies that indicate the crime associated with schizophrenia is due to our elevated rate of drug abuse rather than the illness itself. According to such studies, a sober person with schizophrenia is no more likely to commit a crime than your everyday, healthy individual. This is one of many reasons why sobriety should be a goal for anyone suffering from schizophrenia. 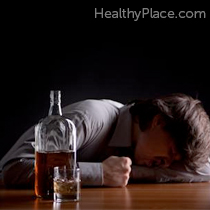 When I first became ill with schizophrenia, I found refuge in drinking alcohol. I did not understand that I was making my illness worse and recovery less likely. One of the greatest strides I made in my recovery was learning to abstain from alcohol and drug usage. To this day, I do not feel as if my recovery would be possible if I were still drinking and smoking marijuana. For many people with schizophrenia, sobriety will be the first step that they take towards recovery.

I understand the temptations of drugs and alcohol, as I, myself, have used them as a coping mechanism. At one point I was drinking every day to cope with the depression and delusions that I was suffering from. During this time it seemed to be the only escape that I had from the strange symptoms that I was experiencing.

It is hard to stop drinking if you suffer from schizophrenia, and initially abstaining from drugs felt uncomfortable for me. Eventually, I was able to overcome my alcohol abuse. In the end I believe sobriety helped me get onto the path of recovery towards a much healthier lifestyle. Hopefully one day we will all be there together.

The Villains Behind Schizophrenia
Schizophrenia and the Mad Rantings Of "Psychos"
Sarah Doyle
March, 11 2015 at 9:08 am

Thank you for sharing about how drugs worsened your condition. Marijuana is among the worst drugs that a schizophrenic patient can take because its known to trigger hyper-frequent psychotic episodes to sufferers - meaning, a patient will encounter multiple episodes quite often than a normal patient and this may in turn ruin the mental stability of the patient entirely to a point where he/she can only be cared for in a mental asylum.
I have a high school classmate who took marijuana without knowing that he had dormant case of schizophrenia, today he's still in a mental asylum for close to 10 years now. So drugs will catalyze imminent death or complete failure to recover for a schizophrenic sufferer if abused for long periods of time.
It is quite unbelievable that this man suffered from schizophrenia. Personally, I think that public education regarding this illness is important to help eliminate the taboo and stigmatization surrounding. Also, if people know that it can be treated in early stages, a lot more future patients would be cured and move on with their lives.

Schizophrenia as overwhelming illness of personality indicates risk factor to alcohol and drug addiction. This ravage date renders more difficult the process of treatment and recovery of this serious mental disorder. Amongst others bad consequences, alcohol and drug addiction impedes the effect of antipsychotic medication in patient, who suffer from schizophrenia. So,it is very critical point to prevent addiction with psychotropic substance in patient with schizophrenia. To achieve this healing intention, it ought to inform patient and their close relatives on ruinous activity of alcohol, smoking, coffee and others psycho-active substances on the long term period of recovery of schizophrenia. Furthermore, when it is well-known fact that in psychiatric clinical practice, this crucial information is neglected from psychiatrist and others professionals of mental health care service. At the end of this thoughtful article, I can say that prevention of addiction from psychotropic substances should be principal concern of clinical psychiatrist along treatment of their patient with schizophrenia.

My particular experience has been that the individual
just needs someone to listen to them.

This is a tough issue. My 21 year old son lives with us and is currently drinking daily. He says nothing else helps including his medication. I see how it makes the schizophrenia symptoms worse but some people advise me to let him figure this out himself as we can't control other people. I know the torment he suffers on a daily basis so I get that he wants the pain to stop but substance abuse is not the answer. Thank you for your blog and your honesty! It really helps!