The Triune or "Lizard" Brain and Addiction

In addiction treatment, one of the concepts that gets tossed around a lot is that of the "lizard" or "reptilian" brain. It comes from the triune brain model set forth in the 1960s by American neuroscientist Paul MacLean. According to this model, human brains comprise the most advanced product (thus far) in mammalian evolution, sharing some properties with our evolutionary ancestors. We have essentially three parts:

As it relates to addiction, the idea is that addicts are engaged in a struggle between their reasoning (neocortex) on the one hand and their instinctual, compulsive reptilian brain on the other. 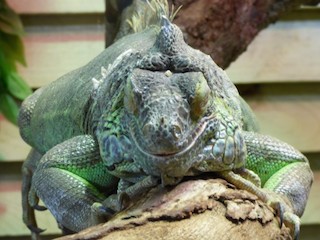 The triune brain model of addiction is actually more complicated than that, however, because it also involves the so-called limbic system, which is involved in certain experiences of pleasure, such as those relating to eating and sex. Some scientists maintain that MacLean's concept of several brain parts forming a "limbic system" in the brain is misguided in and of itself.

Currently, those in the field of neuroscience tend to view the triune brain model as inaccurate, or at least oversimplified, because scientific understanding of animals' brains has progressed. Nevertheless, the model continues to be popular both in treatment settings and among members of the public because it provides a useful, graspable explanation for an extremely complex and mysterious organ.

Experiencing Different Parts of Our Brains

I am not a neuroscientist, and I possess only a cursory knowledge of the theory of evolution. However, one does not need to be a brain researcher or even to believe in evolution to recognize that our brain consists of several different parts - and they do not always work together. For example, I startle easily. My partner likes to take advantage of this fact by hiding and jumping out at me from time to time. A few days ago, she got me good. She hid behind the couch and when she jumped out, I froze and screamed loudly. A few minutes later I was still shaking and my heart was still racing.

From the second she entered my field of vision, I recognized her. I knew it was her, and that she did not pose a threat. But my body still responded in fear. Why?

From a scientific perspective, we might say that my brainstem and amygdala had been activated by the sudden movement. My neocortex, responsible for discernment, knew I wasn't in danger, but my brainstem did not. The two systems were working semi-autonomously.

Anyone with addiction issues knows their problems are anything but rational. Addicts continually hurt those they love most, screw up events and opportunities that are important to them, and get intoxicated at the worst possible times. When you ask us why we did it, we often say we don't know. For example, during my drinking days, I wanted desperately to return to school after going on leave for a year. I thought school would set me straight. But after getting all moved in, I drank myself into health services the night before classes started. I was told I could not return until I got sober. Why had I messed up this thing that meant so much to me? I couldn't explain because it didn't make sense.

We addicts know the craziness of addiction. I used to think that if I understood why I drank and learned enough about the physiology of drinking, I would be able to stop. After many failed attempts, I now believe that self-knowledge cannot save us (although it's still an important component of recovery). It felt as though the rational part of my brain wanted to stay sober, while another part drove a compulsion to get intoxicated.

MacLean might not have been right about the relative size of the basal ganglia in different animals, and his ideas about the limbic system may have been flawed, but he gave us a useful tool for understanding our experiences in these human brains. I believe that when it comes to addiction, we really are of (at least) two minds.

It's true at least that part of an addicts mind is definitely not rational, one problem is when that part of the mind overpowers the rest and becomes the decisive force in any decision making process. Your description of being startled is in my mind analogous to my fear of spiders. This article was well written and I wish to thank you for sharing it.

Thank you very much for your comments. I'm glad you enjoyed the article. I agree, when the irrational mind takes over, there will be trouble.