As I tossed a french fry into my mouth, I thought, "mmm . . . salty." In fact, it was too salty for my taste, but somehow I still enjoyed it. That's because certain foods affect humans in a manner similar to other addictive substances. The fries didn't even taste that good, and yet I kept eating them. This new research in food addiction may explain why. 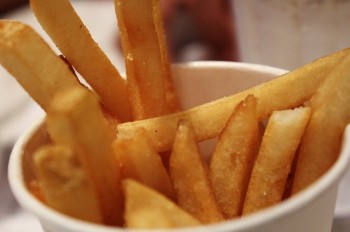 sugar and fat for energy. Recently, some researchers have added salt to this list as well. In a lifestyle of famine and feast, binge eating was necessary for survival. In industrialized countries today, food is abundant and in fact, high sugar and high fat foods are often more easily obtainable than, for example, fresh fruits and vegetables.

As is the case with addictions in general, a lot of controversy exists surrounding food's addictive properties. It is hard enough to define addiction to substances that the medical community considers highly addictive, like heroin and nicotine, let alone recognize addiction to something that is vital for life.

Some recent scientific developments have suggested that certain types of food affect people differently. This approach makes sense to me. After all, with substances like alcohol and cocaine, some people can take them or leave them while others quickly become hooked.

According to a January 29 press release, researchers at Massachusetts Institute of Technology recently unveiled the results of a rodent study that show promise of isolating a part of the brain involved in compulsive overeating and sugar bingeing. The scientists took two groups of well-fed mice and placed them in environments with sugar-based rewards. Some of the mice had the neural pathways from the lateral hypothalamus to the ventral tegmental area activated and some had it inhibited. Those with the excited pathways spent more time eating than those with the inhibited pathways, and they also sought the sugar reward more often, even when they had to cross a foot-shocking platform to get to it. They did the same experiment with hungry mice and found that inhibiting the pathway inhibited compulsive sugar-seeking behavior without decreasing food (as opposed to sugar reward) consumption. The findings suggest that a different neural pathway controls eating involved with hunger and nourishment and eating involved with reward and pleasure.

One of the problems people frequently cite in food addiction treatment is that, unlike drugs, people cannot abstain from food altogether. Thus if scientists are able to identify the different parts of the brain involved in compulsive and binge eating, they may be able to treat unhealthy eating habits while keeping the healthy ones.

From time to time (like every time I make brownies) I have noticed that my relationship to food is not always the healthiest. I have always said I have a sweet tooth, and some foods, such as tortilla chips, I often eat more than I should or intend to. I looked up various symptoms of food addiction and found I have some of these behaviors but not others. Some symptoms associated with food addiction include:

Some of these can also be symptoms of a different type of eating disorder, such as anorexia or bulimia (both of which are often related to binge eating). In addition, people can experience some of these symptoms without being a full-blown addict. My own tendency to overindulge in brownies and chips from time to time has not caused enough pain or problems for me to change much, although I do get down on myself for it. What is your experience with food addiction? Have you made changes and if so, what helped you?

I have most of those symptoms. Explains why I can't get the upper hand with food. It's a never-ending war! I keep thinking each time I lose some weight, that I'll keep losing weight since I'm already losing it. Then the weight loss stops so I give up and bring chocolate home from the grocery store! The only thing that seems to get weight off is to stop eating unless I'm hungry. But, sooner or later, I get hungry. And once I start eating again, I get pissed off and go for the chocolate. Or the pizza. Whatever occurs to me the next time I buy groceries.

Hi Robinn,
Like I wrote to Patti, it seems to me there is something deeper than just poor will power or whatever the old, blame-oriented reasons people used to cite for a person being overweight. (And you don't have to be overweight to have a food addiction or unhealthy relationship with food). With over half of our country overweight, and the numbers rapidly growing all over the industrialized world, clearly something is going on. I know a tremendous amount has to do with the food choices available and the lack of exercise in today's society, but if it were so easy for everyone to adjust their dietary intake to fit a more sedentary lifestyle, we all would have done it. That has not happened, and I believe part of the reason is biochemical. Have you tried any sort of support group or program? I never have, but I've heard good things about some of them.

hi Andrea, I'm glad to hear Overeaters Anonymous is helping you. I have known some people in it and it seems like a sensible and supportive program. Keep up the good work!

I hate my food addiction. I found people at wk making fun of me behind my back cause of how much I would eat when a snack was brought into wk. I can't stop my eating. I can't buy a bag of anything cause I will eat it all. Or a carton of icecream or anything. I shop for food every day for that day, nothing else. Still I sometimes buy to much of something.

I'm sorry that your coworkers were so hurtful and immature Patti. Overweight and issues associated with it is rampant throughout the industrialized world. To my mind, that means something is going on other than a lack of will power! Perhaps you could try a support group, whether it's online or in person.