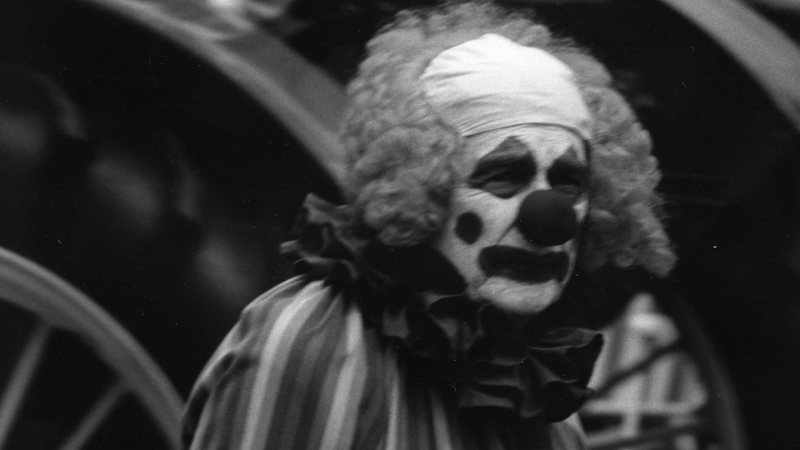 Years ago I was traveling from Philly to L.A. on business and found myself seated next to an unremarkable gentleman – mid-40s, clean-shaven, tall, closely-cropped hair, dressed casually but in all regards neat and presentable. One is captive on a plane and I hoped he understood the difference between friendly and intrusive.

Half an hour later this is what I knew about him. He was a clown who went by the name Chuckles and made a modest living working birthday parties, fairs, etc. Over the past year he had become involved in a legal contest with a rival clown, Lord Chumley, who he’d accused of stealing his make-up.

Chuckles explained to me at some length that every clown develops his/her unique look, as individual as a fingerprint. For one clown to steal the look of another clown was egregious. At this point he’d produced a very slick portfolio containing dozens of photographs showing him in full clown regalia – his make-up was so absolutely generic that I could not imagine anybody stealing it unless the aim was to resemble every other clown in the world.

But, as it turned out, larcenous colleagues provided only the beginning of a sad tale Chuckles told with hideous, obligatory persistence worthy of the ancient mariner. The crux of it was as old as time, love gone wrong, a broken heart. It turned out that Mrs. Chuckles had been wooed by a juggler and abandoned my traveling companion, leaving only a note. As Chuckles began to launch into this part of his story he gradually lost all semblance of composure and soon was crying convulsively, unable to complete a sentence without gasping for breath once or twice between sobs.

I am comfortable with the dark side of humor; but, one has limits. Certainly there was something deliciously ironic about a clown named Chuckles entangled in a copyright dispute with another clown, so shattered by romance on the rocks he could not contain his despondence; yes, but there was also something creepy and disturbing about it – and the flight was long. So, feeling only slightly guilty, I excused myself and found another seat, two rows further back.

For the balance of the trip I watched Chuckles make balloon animals which were passed from one person to the next and retained as desired. I suppose he made about fifty before becoming so lightheaded he had to take a nap. Dachshunds, hippopotami, giraffes, alligators, whales – he really was quite remarkable . . . and I thought to myself, this is a metaphor for life.

A colleague steals your act, a juggler steals your girl - if you’re the clown for the job, you don’t let it get you. You lace up the inflatable shoes, stick on the red nose, and make your goddamn balloon animals just like any other day. You rock, Chuckles.

But what I remember most from that trip is what happened after we landed. Row after row of passengers stood up, collected their carry on articles from the overhead compartments, and gathered themselves for the walk ahead. The kids, sure, I got that, and the teenagers too. But even the hot shot executives, smart as could be in 3-piece suits with leather attaché cases – they too all had their souvenir, brightly colored balloon animals tucked neatly under their arms, like irreplaceable, collectible artifacts. They looked absolutely preposterous, of course, especially because, without exception, not one of them was smiling.

So was looking at his photos unsettling for you, or are you only afraid of clowns when you see them in person (in costume)?
I know a lot of clowns, I worked in a circus for two years and one of my best friends is a clown on Ringling. Of course, circus clowns are a "different breed" than birthday party clowns but at the end of the day they're all people. :)
I hope Chuckles was able to throw out the ridiculous law suit and move on with his love life!

hi jille - thanks for reading - and writing. "one of my best friends is a clown" - you are a true Liberal - but would you want your daughter to marry one?

Hi Alistair! There is something creepy about a sad clown! I'm somewhat fascinated by clowns in a weird sort of way, only the happy ones though,and speaking of clowns...I was at our county fair when I was a teen and they had one of those water dunking tanks. The guy waiting to be dunked was making fun of me for missing the target. It was a Shriner's clown who came to my rescue. He bought ten balls and told me to have at the guy sitting on the shelf. I sank the guy multiple times,much to the guy's frustration. It's amazing how good one's aim gets when ticked off. Oh, before I forget, the clown was a happy one. All the best during this last week of summer.