AWA Classifies Ice Fishing As A Form Of Mental Illness

In a surprise move certain to send shockwaves through both sporting and psychiatric communities, the American Whackadoomious Association (AWA) has declared it no longer recognizes ice fishing as a sport and has officially designated it a form of mental illness.

In a press release carefully timed to coincide with closing ceremonies at the Sochi Winter Olympics, AWA Sports Awareness Director, Quimby Entwhistle, announced, “The AWA could no longer sit idly by and pretend that ice fishing is a sport in any way, shape, or form. You might say it became our elephant in the room, and the room was sitting on a frozen lake riddled with ever-widening cracks. 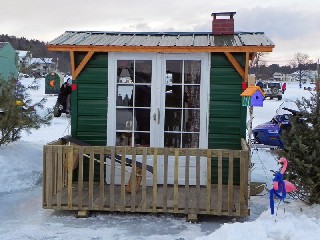 “Do not imagine we made this decision impulsively. All of us at AWA are well aware of the relationship between physical activity, sport, and mental health. We are keen to support endeavors that contribute to mens sana in corpore sano. But one must draw the line."

“By definition, sport must include at least a modicum of physical labor. For example, chess cannot be considered a sport because the vast expanses separating moves mean it can be played successfully for some time while dead. Bowling, too, cannot qualify as a sport because one can play while drinking and smoking cigarettes.

“Ice fishing, as we all know, involves constructing a shack the size of an upwardly mobile outhouse, adding skids, pushing it onto a frozen lake, drilling a hole through the ice, baiting a hook, dropping a line in the water, drinking yourself into immobility, and hoping that no tugs disturb the meticulously crafted oblivion.

“Lacking any physical activity or challenge to qualify it as a sport, we must acknowledge ice fishing for what it is, a bizarre manifestation of mental illness. But, the question is, what kind?

“Is it, like golf, a ritualistic means of avoiding one's family? Is it a Kabuki dance of incremental self-annihilation in which one gradually freezes solid? Or, is it an antisocial disorder so profound that the company of imaginary fish is preferable to human interaction? Hard to tell. Perhaps it is nothing more complex than a way for problem drinkers to make certain their beer is always cold.

“We may never know. But one thing is certain, and when we discover what that is, we’ll tell you.”

I love it! And about mention about chess, too- how long would it take to notice that your opponent had died?

Good afternoon Alistair! I think the AWA is right about ice fishing. What would possess one to go out on the ice in freezing weather, risking the chance of falling into the hole and literally swimming with the fishes? What's next, the need of air rescue helicopters to come get you? I'm always amazed at how many people are out on the ice on Lake Erie. If some of them aren't careful,particularly during the tail end of March,they're likely to be in Lake Erie rather than on it. Well, enough of my rambling! Watch out for those tugs! :)

I don't think there's any mystery about this. Ice fishing is only taken up by the hypothermic, or the soon to be. Brains operate poorly at low temperatures, and for some, of course, this is true at higher temperatures as well.
Anyone who wants to spend time all alone in a small dark place with one or more cold fish must surely be related to any of several of my ex-girlfriends, and that is a definite indication of something seriously awful. Uh...did I just insult myself here? It's a cold morning here in high altitude Utah. Need hot coffee, quick!
On another vein: "chess...can be played successfully for some time while dead" - oh, that's seriously funny!

Tom, your participation is a blessing!