2013 and our "Silver Linings Schizophrenia Playbook"

In the book Silver Linings Playbook (just finished listening to the audiobook version, highly recommended), Pat Peebles believes in silver linings as he watches the "movie of his life." Despite four years in "the bad place"(i.e. mental health facility) for reasons he cannot recall, despite a reluctance to take the meds that are helping to stabilize him, and despite the lessons that reveal to him that happy endings are not always guaranteed, he persists in optimism (“If clouds are blocking the sun, there will always be a silver lining that reminds me to keep on trying”) through a great deal of emotional pain as life continues to throw lessons of reality in his path. 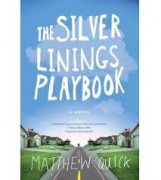 Pat has been released to the care of his family - mostly his Mom. Yep, sounds all too familiar. Although the book is told through Pat's POV (Point of View), it is the character of his Mom that also intrigues me.

One of her sons is successful, the other (Pat) could be deemed a failure in the eyes of the world. Family and friends are split between shame and blame on the one hand, commitment and hope on the other.

We know the feeling.

Sure, Pat is 35 years old and has no job, four lost years, a shaky past, a need for medication and therapy. He spends his days running and working out - yet strives for more, and achieves more.

Boy, can we relate.

And his Mom (along with a few select others) keeps on keepin' on. She buys him clothing, arranges "playdates", supports his workout regime, believes in him. Loves him.

My son Ben is 31 now, and currently lives with us after nearly a decade of separation in a group home. He is maturing, his silver lining is appearing, but often the clouds do still get in the way.

Our 2013 in review, with Four Qualities for Silver Linings

Just like Pat Peeple's mother and the rest of his family (well, the jury is still out on that father, but you have to read the book)

for, as Pat says: “Life is not a PG feel-good movie. Real life often ends badly. Literature tries to document this reality, while showing us it is still possible for us to endure nobly.” Happy 2014! I wish you patience, creativity, optimism, and watchful gratitude. Here's to you!

Sandy Hook Plus One Year: Any Mental Health Lessons?
Why I Still Hate Schizophrenia
Maureen OConnor
January, 6 2014 at 1:19 pm

Beautifully written although i still can't bring myself to see or read Silver Linings. My son is 23 and it has been 1.5 years since diagnosis. He lives with us and all he does is eat, sleep and chain smoke (we pay for cigarettes). Meds take care of delusions but I am hoping to see more progress in 2014 as far as acceptance of disease. We keep meds locked up too. He has stolen $ from us so we all have lock boxes for wallets, etcetera. Just a fact of life right now. He is safe.......

Randye, so true, again. After more than 4 years separated from Tim in inpatient/residential care (between ages 11 and 18), we are seeing some silver linings in schizophrenia as well. Slowly Tim has shown optimism and humor. He is in an excellent work study program that provides him sheltered, part time work. We have guarded optimism and watchful gratitude as well. Thanks for sharing this!

so glad to hear that, Chrisa!!!