Mental Health Setbacks for Children with ADHD Will Happen 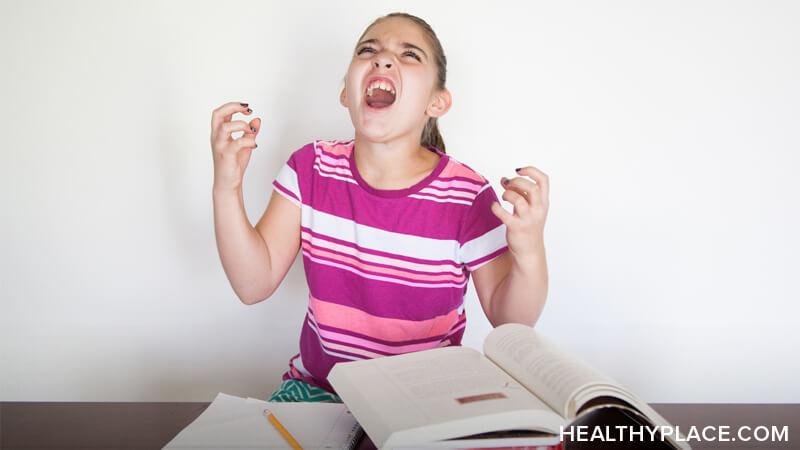 You can sometimes predict that a mental health setback will happen, but still, when it happens, a mental health setback seems to come out of nowhere. I got a call from school staff this morning saying that my son was disrupting the class. He had been out of his seat, kicking chairs, and refusing to do work. In the background of the call, I could hear his teacher attempting multiplication lessons while the paraprofessional explained quietly that my son was now on the floor, unmovable and unresponsive to everybody. He was no longer allowed on Friday's field trip. The staff put the phone to my son's ear so I could try to talk him, but he hung up on me instead. After months of doing amazingly well at school and home, this was definitely a mental health setback.

Mental health setbacks are completely normal. No progress moves in a straight line. Speed bumps and barriers are natural. This doesn't make a mental health setback less frustrating, though. It's frustrating as a parent when circumstances feel out of your control. In this instance, our pharmacy took over a week to refill my son's medications. Despite numerous calls to them starting on Tuesday, we were out of one medication by Sunday (the sudden stop of a medication may cause relapse in psychiatric patients). He was then down to his last stimulant medication today, and in the flurry of this morning's routine, he forgot to take it.

That's the catch 22 of attention-deficit/hyperactivity disorder (ADHD): It requires some focus and organization for my son to remember his medication in the morning, but he isn't focused or organized until he takes that medication. We give it to him ourselves to make sure he remembers, but today, he took it from his dad, set it down on a table while he finished getting dressed, and in the process of dressing, forgot about taking the medication.

Mental Health Setbacks Can Cause a Domino Effect

Without the medication, we faced a trigger for mental illness relapse and, almost predictably, my son's ADHD symptoms went up a notch. In class, he couldn't sit still, pay attention, manage his impulses, or build the motivation to do work he didn't enjoy doing. As a result, he got natural feedback from his teachers that he wasn't doing well. They were asking him to sit down, do his work, etc., which triggers anxiety. Anxiety then triggers anger.

Because of his disruptive mood dysregulation disorder (DMDD), my son cannot control anger once it hits. If any outburst is in full swing, you have to just move out of the way, make everyone safe, and wait it out.

Luckily, the one medication we didn't run out of was the DMDD medication. In the past, the anger and oppositional defiance his teachers saw today would have been 10 times louder and turned into a destructive outburst. His reaction in the classroom today still wasn't typical for a kid his age, but it was definitely a quick and "easy" outburst, as far as DMDD goes.

Ultimately, my son is fine. His classroom, intended specifically for kids with emotional and behavioral disorders, is equipped to handle this situation. He wasn't removed from class or suspended. He was ultimately able to get his medications, which were filled later that morning. He cooled down, returned to his work, and finished the rest of his day. His behavior tracker sent home from school was pretty grim. He declared the entire day to be a loss.

At the same time, though, he was ready to have a different outcome tomorrow. He learned from it and definitely has a keener perception of what his medications do. As parents, we learned that the supports we've set up for him so far were successful. The video below goes into a little more detail on what parents can learn from mental health setbacks like these.

Melissa David is a mother based out of Minnesota. She has two young children, one of whom struggles with mental illness.The support and wisdom of other parents proved invaluable to her in raising both her children; and so she hopes to pay it forward to other parents via Life With Bob. You can find her on Facebook and Twitter.
5 Things Parents of Children with Mental Illness Don't Do
Childhood ADHD and Stealing: What's Going on with Your Kid?
Karen
December, 8 2017 at 8:05 pm

Wow, I just found your blog and now headed I'm reading every post. You have described my son exactly! It is comforting to know that we're not alone.

Hi, Nayem. I don't know where you're at, but there are usually crisis lines in your area you can access. Here's a list of series of places to find help:
https://www.healthyplace.com/other-info/resources/mental-health-hotline-numbers-and-refer…
Your workplace may also have an employee assistance program that usually is confidential where you can speak to people about mental health concerns. I hope you're able to find that help