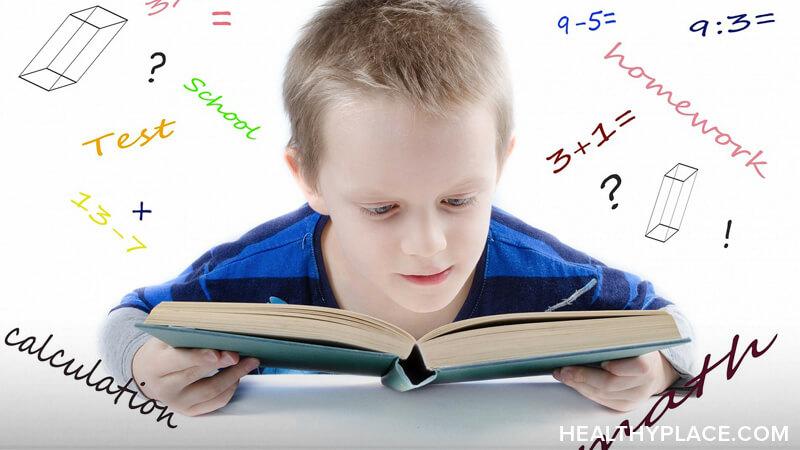 Twice-exceptional children are gifted children with mental illness, and they often get overlooked in school. A mentally ill child's problem behaviors may mask their strengths, or their behaviors may frustrate teachers so much that teachers overlook the child's strengths. These gifted kids with mental illness are twice exceptional and we should recognize them and push them as much as we do the typical gifted child.

My son spoke in full sentences by age 18 months. As a preschooler, people described him as bright and funny. He'd have deep questions. I remember driving past a cemetery when he was about three years old. He asked, "Will you still be my mommy when you're ashes?"

Maybe this was more a sign of his oncoming childhood depression than intelligence; but as a mom, I was startled.

In kindergarten, his teacher said he'd be above average academically if he didn't argue through every test or leave class. He was diagnosed with attention-deficit/hyperactivity disorder (ADHD) that summer. He failed every measure of attention on his neuropsychology exam, yet scored above-average on intelligence measures. The neuropsychologist estimated that, if he could pay attention, he'd have a 130 IQ.

She called this "twice exceptional." She said kids like my son tended to have a superior vocabulary, advanced ideas, high creativity, and sophisticated humor. However, they lacked social skills, organization, self-control, mood regulation, and showed other signs of mental illness, learning disorders, or neurodevelopmental disorders.

Schools aren't built for children with mental illnesses. My son was tested for advanced learner status in second grade and he didn't qualify. He didn't "fail" either. It's a paper-and-pencil test. He made it halfway through before getting distracted, doodling, then wandering off to never finish. Before he joined a self-contained special education classroom, my supposedly twice-exceptional son nearly flunked the fourth grade. He never turned anything in. Only his individualized education plan (IEP) saved him.

His mental health providers argued that if he was academically challenged, his disruptive behaviors might decrease. Boredom was (and is) a major trigger for him. However, the school felt they couldn't accommodate his behaviors in advanced classrooms. He tried one advanced reading class, but his outbursts disrupted lessons. He never finished work. He had nothing to show he could read, let alone read at advanced levels.

Traditional schools tend to neglect kids in poverty, marginalize children of color, and have difficulty managing children's disabilities. These kids are all capable, but they're battling centuries-old systems not initially intended for them.

I didn't expect my younger daughter to meet "gifted" expectations because my son had not. I believed her to be very intelligent but I also believed my son was intelligent. My daughter, however, does not have a mental illness. The school's test showed her to be as intelligent as I figured she was and she qualified as an advanced learner. Now, our family juggles how to celebrate her while not alienating my less academically-gifted son.

Recognize first, then, that regardless of test scores, a child with mental illness is capable. My son with ADHD has difficulty focusing, but give him LEGOS or a video game, and he focuses for hours. He aces computer tests that he'd flunk on paper because he loves screens. We're pushing a STEM summer program this year. He may not succeed, but we're trying because the classes focus on technology-related things he loves.

My daughter will succeed regardless of what I do. I'll encourage her, of course, but my child with mental illness deserves encouragement, too. I can't keep imagining the dim future that most parents of children like him probably envision. All children deserve hopeful expectations.

Melissa David is a mother based out of Minnesota. She has two young children, one of whom struggles with mental illness.The support and wisdom of other parents proved invaluable to her in raising both her children; and so she hopes to pay it forward to other parents via Life With Bob. You can find her on Facebook and Twitter.
Separation Anxiety and Disruptive Mood Dysregulation Disorder
How to Transition Your Teen from Inpatient Psychiatric Care
Stephanie Webb
April, 20 2018 at 3:00 pm

I believe you are a twice exceptional mother. I admire you for helping to educate moms about the complexity, patience and unconditional love that's imminent for the well being of a child with such awesome exceptions. I cannot tell you how grateful i would have been as a child to have had someone like you to help me with my baby brother. Brilliant, full of life, with ADHD, Mental Illnesses. Always wished i could do more for him. But a child myself. I'll be with him again someday. Bless you. I wish you well being