You know how they say that if you think you might be going crazy, it’s proof that you’re not? Well, it’s a lie. One of many they tell you about mental illness. ― Forrest Carr, A Journal of the Crazy Year

The amount of sympathy you get from having an illness is paid out like a Ponzi scheme and psychiatric disorders are all the way at the bottom. -- Nenia Campbell, Tantalized 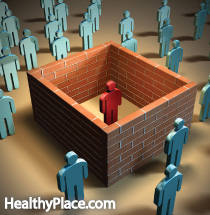 Although I had symptoms as early as age seven, I was not diagnosed until after my freshman year of college. I was not surprised to know I had a mental illness, so it was easy for me to discuss it. I soon learned, though, that not everyone was going to wish me well. I still remember some of the less-than-supportive comments:

There was no cast to sign. People did not bring my family meals. People were considerably more sympathetic when I had a kidney stone than when I was diagnosed with a mental illness.

What are some comments that indicate lack of sympathy that you have heard?

“Mental illness" is among the most stigmatized of categories. People are ashamed of being mentally ill. They fear disclosing their condition to their friends and confidants-and certainly to their employers. ― Elyn R. Saks, Refusing Care: Forced Treatment and the Rights of the Mentally Ill

I was once advised by a potential employer not to disclose the fact I had depression because it might scare potential employers. Another potential employer asked my job coach, "I have knives in the kitchen. Will anybody get hurt?" Mental illness stigma is powerful, and it's easy to understand why so many people keep their diagnoses a secret--we have to earn a living, and mental illness disclosure can threaten that. That's why disclosure is something that should be seriously and carefully considered.

Is it safer to spend eight hours a day with people we can't open up to? Is it better to be constantly on guard that someone may see us go to a mental health clinic? Is it better to worry about medication causing a false positive on a drug test?

What should we do? Should we risk discrimination because of mental illness stigma and disclose our struggles? Or should we keep it secret and worry that something will force disclosure?

Which of these is the most popular in this mental illness quote? I personally have never run into the second one, but I've heard the first and third one many times. I know that many people who understand that mental illness is just that--an illness--are scared by the behavior of a person with mental illness. A popular example is the homeless guy who preaches at nobody in the streets.

I remember a few letters to Dear Abby that dealt with the stigma of mental illness. One reader wrote to inform her that no, people with schizophrenia did not need to be forcibly institutionalized and medicated, and another wrote that no, people who self-injure are not attention seeking. If Dear Abby believed these myths, what does a layman believe?

The good news is people can change with education. The more people who disclose that they're being treated for a mental illness, the more people will realize they have a competent mental health consumer as a friend, neighbor, or coworker. That will lessen the stigma attached to mental illness. Disclosure is a brave choice that's not for everybody. You need to decide for yourself.

I constantly am battling the stigma of all of them. Fighting for my daughter. My family doesn't understand or like the stigma behind having someone with a mental illness in their family. At work and past relationships I was asked if I took my meds, blamed fot others negative behaviors. Fired. I make huge steps forward to be shoved to the ground by lawyers, and judges telling me I will always be broken. It makes you feel that you are doomed.

I've heard all 3, I follow #2 as I have been fired and had nasty comments in the work place. I know I am highly intelligent, great manager and been good in every other position, so I've learned my lesson. Out of work I don't hide my scars, because it's actually helped some people talk to me who had the same problem. It's an illness just like any other. If you look thru history many well known people have had a form of mental illness, from presidents to artists.

Don't fear disclosure of the state of your Mental Health to your family and close friends. You would disclose if you had, say, kidney stones. So, be kind to yourself. Talking and sharing will help you.

I've heard all three before. It took well over 20 years to get a correct diagnosis of Bipolar II instead of depression. When first diagnosed, I was angry, embarrassed, ashamed...the whole gamut. Finally came acceptance. Then came research, research and more research including, but not limited to, books, Internet, autobiographies, YouTube videos, etc.
I was put on meds. I was one of the lucky ones who found (with the help of my great pdoc) the right combo after just four months.
Now to the stigma part. In the beginning, I disclosed my illness to quite a few. Then it got turned around and used against me, e.g., you need your meds adjusted, did you forget your happy pill today, you're crazy and worse.
I disclose to very few these days. Those who used my illness against me are now forever divorced. I'm much happier now without those toxic people in my life.
I hate the way mental illness, especially bipolar, is negatively portrayed in the media, in the form of t.v. shows, movies, news articles. We are dangerous people, don't you know?
I didn't choose to have this illness. It was passed down genetically, as I learned from my research. My mom had bipolar (though no one knew what was wrong with her; even she didn't know), her maternal grandmother. That's as far back as I needed to go. With my mom, it explained all of her actions. She was known as being 'high strung'. I remember the manias and the depressions. My only sibling has either bipolar or borderline, or both. Her oldest son has bipolar. I recognize it in him, having it myself. He's now in prison. Where they live the stigma is even worse. They will never get help and that's sad.
I'm sorry if I've rambled (typical for someone with bipolar). Stigma sucks and prevents people from getting help.