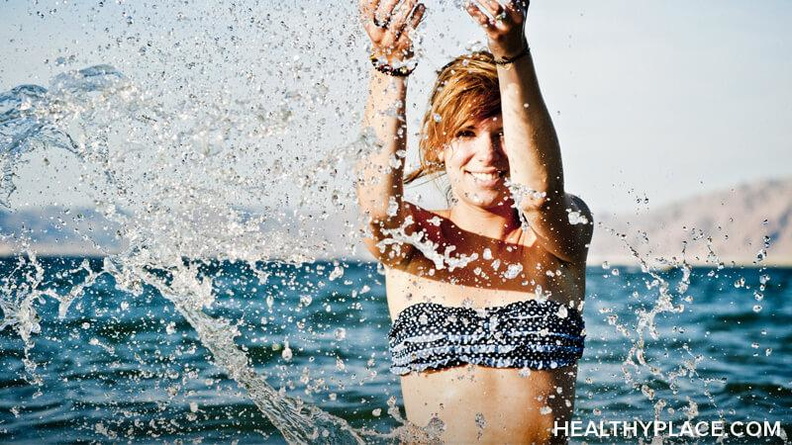 You May Have an Inability to Sweat

I went to college in central Texas and took a sailing class one summer. Unfortunately for me, the class was during the hottest part of the day during the hottest summer on record. Equally unfortunate was the fact that my psychiatrist neglected to mention that the medication I was on interfered with my ability to sweat.

Needless to say, my friends took me to the student clinic with symptoms of heat exhaustion including hallucinations and paranoia.

Some psychiatric medications, blood pressure medicines and decongestants can prevent the body from increasing blood flow to the skin, which is necessary to cool body temperature. As a result, individuals who take any of these medicines are at risk of overheating, which can be fatal.

Other types of medications, including antidepressants, drugs of abuse and cold and allergy medicines, can prevent the body from sweating, which also leads to overheating.

In addition, water pills and beverages with alcohol or caffeine can cause dehydration. 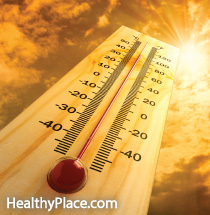 So drink plenty of water, wear appropriate clothing, stay in the shade or air conditioning, avoid strenuous physical activity, and bathe or shower frequently. Know if your medication has an impact on your ability to sweat--the Physician's Desk Reference is an excellent source.

You May Experience Increased Depressive Symptoms

According to an Australian medical study,2 the heat can increase depressive symptoms. The study reads:

Above a threshold of 26.7°C (80.06°F), we observed a positive association between ambient temperature and hospital admissions for mental and behavioral disorders. Compared with non–heatwave periods, hospital admissions increased by 7.3% during heat waves.

Mortalities attributed to mental and behavioral disorders increased during heat waves in the 65- to 74-year age group and in persons with schizophrenia, schizotypal, and delusional disorders. Dementia deaths increased in those up to 65 years of age.

By the way, that's about 80 degrees Fahrenheit--not too terribly hot. It's been in the 90s here in Indianapolis.

The heat can do strange things to one's mind. NJAMHA reports that about one percent of the American population shows symptoms of seasonal affective disorder (SAD) during the summer. In addition,

In addition, prolactin inhibits the effects of dopamine, a chemical in the brain that is associated with positive feelings.

These are all symptoms of depression. So when it's hot, pay close attention to your mood and utilize what coping skills you have. Try to stay cool--both literally and emotionally. And know that things will probably improve once the temperature cools off.

You May Feel Increased Aggression

According to the Canadian Broadcasting Corporation,3 there is an increase in psychiatric hospital admissions during heat waves. The suicide rate increases and so does aggression. As Dr. Len Cortese observed,

"Essentially, what's occurring is that the neurotransmitters, the chemicals in the brain, are probably going off balance. When chemicals in the brain go off balance, it will cause difficulties in what the brain does. And what the brain does is, it helps us with our mood, so our mood is set off. The brain helps us keep our anxiety under control so [during heat] people have difficulties with anxiety."

There are many excellent crisis phone lines and chat lines (CrisisChat.org being one of my favorites) to utilize if the heat affects you badly. But know that if the heat is to blame, things will get better once it cools down. The heat and the problems it causes are temporary. Do what you can to keep your body cool, and your mind will thank you.

You can also find Becky Oberg on Google+, Facebook, Twitter, LinkedIn and on her blog, One Woman and a Laptop.

Mental Health System Fails with Lethal Results
How to Get Ready for a Therapy Appointment
Missy
September, 2 2018 at 7:29 pm

I can't tolerate heat, have to be in air conditioned cars & houses !!! A pool or ocean !!! If I do any yardwork I must swim an hour before & after yardwork !!! I must turn up air conditioning when doing any housework or cleaning oven or laundry !!! My lightbills run into $208.00 to $215.54 in summer !!! Sometimes I work out to Xbox 360 Kinect with ac window unit full blast !!!

Correction: NSA person said: People think weakening our laws will help. Which it doesn't do anything but make us vulnerable. Encourages cybercrime to happen. We've gotten to complacent. As to say: That's how it is". End Quote.
Now for myself: It really sucks. I just think that ppl can solve everything with mental healthcare. I'm not credo sizing Misty. This has nothing to with her. <--This has everything do with what happened in 2013. When I tried to take my own life. All that hassle. Over cyberharrasment or Cyberbulling.

I'm going through severe anxiety and depression and we are going through a heat wave in Odessa Texas. I'm glad I found this on Google because now I know what's happening to me and I can control it.