Alcohol and Self-Injury: A Dangerous Cycle

Alcohol and self-injury definitely don't mix and can lead to serious consequences. As you may know, self-medicating is a way many people with mental illness deal with the symptoms of their disease. I have fallen into this trap multiple times with heavy drinking. Of course, choosing to self-medicate over a doctor-prescribed treatment is never a good idea, but alcohol can intensify our feelings when we are already suffering from the addiction of self-harm. We may hurt ourselves worse than we ever thought we could, which is exactly what I did.

In matters of general mental health, I have always been told that drinking alcohol should be kept to a minimum, if I should drink at all. The symptoms of bipolar disorder would definitely be exacerbated and my illness could be made much worse. But what about self-injury? I learned the hard way that drinking while struggling with this problem can lead to nothing but bigger scars and higher chances of mortally wounding ourselves. My left wrist will forever show the result of a drinking episode where I felt the desire to harm myself.

Knowing how alcohol can affect you, the wisest course of action is to either not drink, or consult a doctor about how alcohol will mix with your mental health symptoms. You may be in a great mood before you start to drink, but that mood can taper off as the alcohol begins to depress your central nervous system. When you become less inhibited, it is probable that you will experiment with your self-injury and go beyond what you normally do to yourself. You may cut deeper and in more dangerous places. You may try to burn yourself to a higher degree (10 Ways People Self-Injure) or take more than enough pills to lead to a painful overdose. 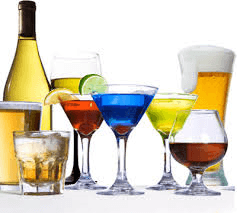 The worst part is the possibility of fatally hurting yourself. Self-injury is not necessarily a suicidal act as much as it is a coping mechanism, but matters can escalate quickly when alcohol is involved. Emotions or feelings that you may have been trying to repress can rise to the surface, making you vulnerable to suicidal feelings that you otherwise would be able to control. It is possible for self-injury to turn into a suicidal gesture. It can happen even without intent.

Drinking Feeds Into the Cycle of Self-Injury

Once the effects of the alcohol have worn off, what is left, anyway? It is most likely that you will feel even worse than you did before. Drinking can only numb you for so long before you have to tackle that problem or stressor head on. Feeling worse after drinking can begin the cycle of self-injury over again, as the shame or guilt from drinking or from actions you performed while intoxicated can be triggering. To show ourselves the best self-care, sometimes it is best to abstain from drinking.

Use Bright Color to Fight the Dark Stigma of Self-Harm
Make Memories, Not Scars: Reminiscing Without Self-Harm
serenity
April, 13 2022 at 5:09 am

Hi Serenity,
I'm glad this article helped you. It's true that alcohol rarely makes things better; it definitely impairs your judgment and can lead to injury, whether purposeful or accidental. I hope you've been able to cut back on drinking (or, ideally, have stopped drinking entirely) and take better care of yourself. I also hope you haven't sustained any further injuries, and that the original ones are healing nicely. (Be sure to take very good care of them until they do!)
Take care,
Kim

I have family problems, my daughters don’t talk to me I’m not allowed to see my 2 grandchildren and my Dad left my mum after 52 years and cheated on her. I had a divorce 5 yrs ago. And my son of 14 been taking drugs. I got drunk and beat myself up. Last night. And my partner had no control over me. But that relationship I’m in is toxic really. I was ok, but later on when I had drunk to much, I went mad, and broke my toe, and banged my hands on the tops of my legs and can’t walk today. I feel so ashamed of myself. I hate myself.

Louisa,
I truly hope you are feeling better today. Yes, I'm a total stranger to you. I want to tell you that you are valuable. I hope you choose to forgive yourself for these actions you wrote about. I genuinely hope your toe and legs are better and that they will completely heal. I wanted you to know I was thinking of you today.

Thank you for sharing this. You