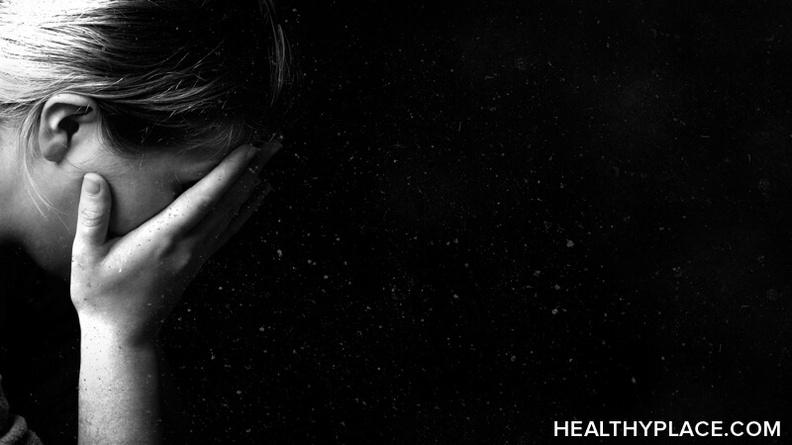 Self-hatred is a core feeling in many people suffering from eating disorders. Including me.

I've been having an internal war with myself today.

My head hurt. My stomach hurt. Even my brain hurt. Eventually I give in, starving. Then...

You're a fat, disgusting pig.

I recently finished reading Portia de Rossi's memoir of anorexia and bulimia, Unbearable Lightness. What struck me was how alike our internal voices were.

"You're nothing...You have no self-control. You're a stupid, fat, disgusting dyke." 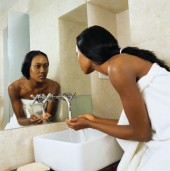 Other than berating herself for being a lesbian, de Rossi treated herself exactly the way I did — and sometimes still do.

I read a lot of memoirs about anorexia and bulimia while completing my master's thesis. Shani Raviv chronicled her unrelenting self-hatred in her memoir, being Ana. This self-hatred almost cost her her family, her sanity, and her life.

I've read old journals that chronicle my self-hatred from an early age. I never felt I was good enough. Pretty enough. Smart enough. Then I became anorexic. The self-hatred became rampant.

The more weight I lost, the worst I felt about myself. That's how it works whether you have anorexia or bulimia or binge eating disorder. The more enmeshed you become in the eating disorder behaviors, the worst you are going to feel, and that includes how you feel about yourself.

Raviv had to learn to love herself in order to heal. As did de Rossi and others. And so will I.

I believe self-love is the opposite of self-hatred, and self-love is necessary for full recovery from eating disorders. Why is that so hard for me? I'm not completely sure. Some days I get it. If I don't love myself, who will? If I don't love myself enough to take care of myself, who will? It is so hard to let go of something that has been a part of me for so long, even pre-anorexia.

I now realize that self-hatred is a trait I can no longer afford to hold onto. I will not be able to fully heal. Each day is still a struggle, but I am fighting.

im a 12 year old girl. I hate my body its just so fat and heavy. im just over 10stone most of my mates r under 8 stone. it annoys me so much because i havent ate veg or meat in 10 years and 9 months, i hardly ever eat fruit so i only eat junk but i hate eating anything else because of taste ad texture. it really bugs me because i wanna loose weight but if i see food im gonna eat it. Ive eaten so much this month its honestly annoying but i cant stop myself i just want to eat and eat. i also hate talking to people about it bc im worried people with say oh ur not fat and think im an attetion seeker. i understand they at times give me compliments but it makes it worse as i wish its true.

Hello, thank you for reaching out to honestly express what you are currently dealing with. That is a brave, admirable first step. I am so sorry to hear that you feel uncomfortable and insecure about your bodyweight, and I would encourage you to seek out resources to help you navigate these difficult, complicated emotions. Please see HealthyPlace's list of interventions and hotline numbers here: https://www.healthyplace.com/other-info/resources/mental-health-hotline-numbers-and-refer…. In addition, you might also find our online Eating Disorders Community to be helpful too: https://www.healthyplace.com/eating-disorders. I know it can be hard, but please continue to reach out.

I feel that and I feel like I can't tell anyone because my parents are trying to help me recover but at the same time I don't want to recover I just want everyone to leave me alone. I hate myself for so many reasons and I can't see anything good about me

Hi, Rbanana,
Thank you for the comment. I'm so sorry that you feel like this. It's a brave step to be honest about where you are at in the recovery process, even if it's not something you feel ready to commit to.
I can tell you that healing is worth it, and here are some resources and hotlines to point you in the direction of help: https://www.healthyplace.com/eating-disorders and https://www.healthyplace.com/other-info/resources/mental-health-hotline-numbers-and-refer….
I know it's difficult, but please consider reaching out.
Mary-Elizabeth Schurrer
Blog Moderator

I'm too fat. I shouldn't eat. You don't deserve to eat. Don't be so weak...
"You're a fat, disgusting pig."
EXACTLY what goes through my mind every single time I even think about eating. Except I'm SUPPOSED to feel that way because I really am fat (BMI over 40). I've been hating myself more and more and more and trying harder and harder to never eat except when I can't possibly help it ( and then I hate myself triple time when I do give in and eat anything). And I'm still fat. So clearly I don't hate myself enough yet, because if I did I'd stop eating until I wasn't fat any more.

On the contrary, I think it's a victory on your part that you haven't stopped eating. That gives me confidence that you still are holding onto hope that your worth, identity and self-love are not tied to your weight. You deserve to live free of the restrictions that ED has placed on your mind and body. You deserve to eat nutritious foods that sustain you and allow you to participate in all the activities that you're passionate about. You deserve to feel beautiful, whole and confident in your own unique body—no matter what size it is. Don't give into the urge to starve yourself, abuse your health and ruin your quality of life. You are meant for a much greater purpose. But if you need some tangible ED recovery support and resources, I would advise checking out the HealthyPlace Eating Disorder Community page (https://www.healthyplace.com/eating-disorders). Be strong and courageous—you do, in fact, deserve to eat!

exactly how I feel everyday and every hour of my life. Except, instead of not eating, I binge which doubles these feelings. The self-hatred is killing me from the inside. I definitely feel the same as you described. My brain hurts, my stomach hurts, all of my body aches. I don't see the point to live with a constant self-hatred. So what? I will look back one day and all I remember is this feeling? Disgusted of myself for wasting a life like that... There are such bigger problems in the world and I am consumed with this. That is why I don't think I deserve to have all that I have. Hopefully, I can overcome this disgust and disappointment soon. Otherwise I can't imagine the next 10 years.

I know exactly how you feel I've had a battle with pro-Mia and pro-Ana for a little over 4 years now it is a struggle my boyfriend tries to help me through it don't let it get to the point where even your significant other can't help you. I also battle with cutting I've been a compulsive self harmer for 6 years it's tough but you guys are doing great fighting the battle keep it up guys at times it seems hard to find the light at the end of the tunnel but single, married or in a relationship just know you matter to so many people. That's what help keeps me going I hope it can help you guys too

I too am a 40-something anorexic/bulimic/addict who hates herself. I have always felt this self-hatred even before I became ill. I have been fighting this war for 25 years and I want to stay positive but the older I get the more difficult it becomes. I have tried suicide several times...now i am too scared to try again because I cant get it right and I dont want to wake up angry I didnt die. It has happened every time. I am just so tired....I wasted my life being a professional anorexic/bulimic and all I have to show for it is missing teeth and weak bones. Im scared. Scared of living and of dying.....I just want to either live my life while my heart is still beating, or die and make this hell on earth stop.

That's such an interesting concept, to 'love yourself'. It could be the answer to so, so many problems. It suggests to me something to do with 'surrender'. To give yourself up to something that is in you, urging completion. And yet the something is yourself. How can this be? It's you but it's more than you. This is a problem that affects us all massively today, whether or not you have an eating disorder. The disorder is not quite being able to get to the surrender of loving yourself. I can't help you with the ED but I think the real problem is a human one.
Sorry, I'm just thinking out loud and it's not really relevant to the blog.

And about the eating disorder..... I don't even think it is one.....I throw up after I eat...I don't eat much but I don't throw up all the time so its not a disorder..rite?
http://www.antiaging-systems.com/

how do you stop hating yourself? how do you fight the thoughts?

I totally relate to this. I do not have an eating disorder, but I have a compulsion to self-harm. I am covered in scars. Every time the cycle of self-hatred you describe starts up, I am immersed in it so quickly -- like a tidal wave -- and it will not stop for a long long time. I take medications and receive ECT, am hospitalized and diagnosed and rediagnosed -- but underlying everything I do is fierce self-hatred. I am so in awe of and inspired by your decision to turn away from that and be kind to yourself. I have not been able to do that yet. Thank you so much for this post.

Each day is a struggle....
I can truly relate.
Keep writing.