The Stigma of Side Effects of Having a Mental Illness

What Are the Side Effects of Having a Mental Illness?

There is no doubt that people with a mental illness, especially those suffering with depression, deal with physical side effects, and many lack the energy, or the will, to take care of themselves. The truth is that I have gone days without a shower due to the side effects of having a mental illness because I have been too busy sleeping the days and nights away. If you do see me in public, I may have just pulled myself out of bed for one hour to purchase something to eat, in hopes that I will actually be able to taste my food. There was once a time when putting on makeup felt like painting a house on my own, and the thought of stepping out the door terrified me. Having poor hygiene may often be a physical demonstration of the side effects of mental illness, but sadly people often assume that laziness and homelessness are also true and part of their perceptions.

Anyone who treats their mental illness with medication may experience the shakes from the side effects that turn a medicated person into a bouncing washing machine set on high. My hands and sometimes my body shake, and I have been to nail technicians at beauty salons, who question, “Why are you so nervous?” It maddens me that people assume emotion or weakness when I shake, and really it is simply my mental health medication. People with neurological disorders often face this same judgement from society; why do we have to say anything at all?

Then there may be a woman who is wearing caked, bright red lipstick that cuts across her 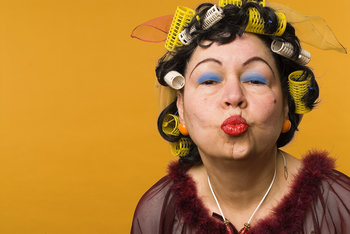 the corners of her mouth, missing the edges entirely. She also wears mismatched, bright clothing, and as you watch the crowds of people stare at her, they are observing the side effects of mental illness. She is extremely social, excitable, engaged, elated and very manic. People often do not understand manic energy caused by bipolar disorder because those affected often act and look out of the ordinary. I have witnessed people whisper under their breathe, “Go back to the loony bin you wacko.” Why do we have to be so cruel, and why not just consider her a colorful character, make her day, and respond when she says hello?

Do the Side Effects of Mental Illness Really Matter?

I realize that quite often you can clearly and visibly see the side effects of mental illness, but more often than not, you simply cannot. It may be the lady walking down the street in a pencil skirt, heading to her government job with a briefcase in hand, or the construction worker on the highway that has put in yet another 12 hour day on the job.

My point is, why should it matter at all? Are we not all different and unique anyway? It seems society is constantly obsessed with fitting people into tiny boxes, needing to make assumptions about who people are, and what they experience in life. The constant stereotyping and profiling of people makes those who have a mental illness want to hide and not be part of the larger population, which leads to the significant problem of isolation for far too many.

I have asked a certain question time and time again, and I ponder, “How can you really tell that a certain person is experiencing mental health issues in daily life, and what does normal look like anyway?”

APA Reference
Paquette, A. (2015, August 5). The Stigma of Side Effects of Having a Mental Illness, HealthyPlace. Retrieved on 2022, October 5 from https://www.healthyplace.com/blogs/survivingmentalhealthstigma/2015/08/the-stigma-of-side-effects-of-having-a-mental-illness

I am one of the current 6 million Americans that suffer with Bipolar Disease...I have written 4 books on living with and coping with Bipolar Disorder...just getting started...daughter r[resented problem 15 years ago...then I found that I have been Bipolar2 for 50 years...my books (Bipolar Dad; Scatterbrain; Bits@Pieces; and Straggler are on Amazon)...I am really enjoying the flood of information that you present...