Out at Work: LGBT Mental Health in the Workplace

Common wisdom and social research both tell us that accepting who we are and being open about our sexual identity brings mental health benefits, despite the negative consequences we may experience for doing so. Many of us who have come out LGBT know that coming out as a sexual minority is risky and the consequences are real, particularly in the workplace. We also know that coming out is not a one time thing. It is a never ending process of interacting with others while trying to remain as true to ourselves as possible. Whether it is correcting co-workers who assume the ring on my finger means I have a husband, or telling my boss the woman in the picture frame isn't my sister, we are always making a moment by moment decision about disclosing who we are.

Coming Out with a Mental Illness is Risky 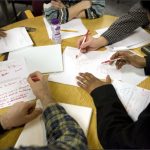 I’ve found some similar truths of living with mental health issues. Coming out is risky; you may be the subject to workplace gossip, passed over for a promotion or even be fired. Coming out as someone who struggles with depression, bipolar moods, PTSD, anxiety, etc. is an ongoing process of deciding how much information to share about yourself and with whom.

Whether coming out as LGBT or someone living with mental illness, I totally believe that being out and open about the things that help define who we are is ultimately best for our mental health and emotional well-being. I also acknowledge that bad things can and do happen when we choose this path. So when it comes to coming out in the workplace I, like many others, proceed with caution and disclose information on a need to know basis.

APA Reference
tneely (2013, March 5). Out at Work: LGBT Mental Health in the Workplace, HealthyPlace. Retrieved on 2023, February 7 from https://www.healthyplace.com/blogs/thelifelgbt/2013/03/out-at-work-lgbt-mental-health-in-the-workplace

“Forgive Me Please?” - Mending Hurt Relationships
How to Honor Our Feelings to Honor Ourselves
paul martin
June, 24 2013 at 1:36 am

Thank you for this great article! I'm pleased that this issue is being discussed. Keep up the excellent writing!

I can understand that you would disagree (and be right about it) but I feel it's much harder to come out (for the rest of my life kinda process), as someone who has been clinically depressed. At least when I say I am gay, they know what gay is but met with weird answers like "Oh, I was sad just last month", or other misinformed answers. Then you have to explain THAT!