When PTSD and Intimacy Collide: What Really Happens? 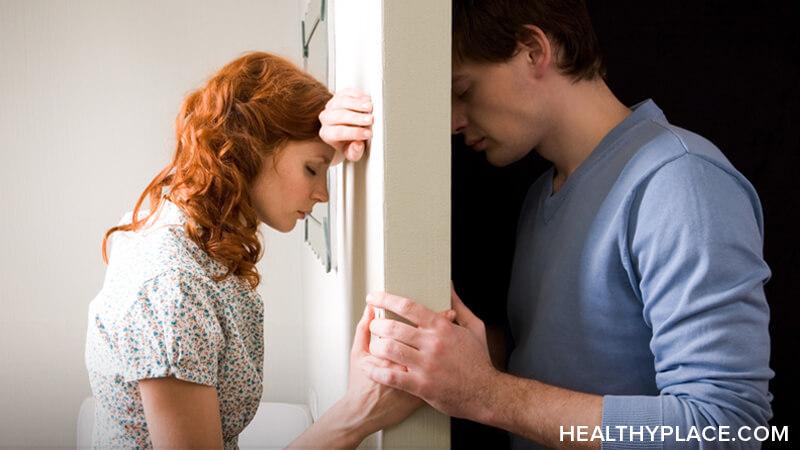 Difficulties with posttraumatic stress disorder (PTSD) and intimacy are common, regardless of the nature of the trauma leading to PTSD. A quick search of the Internet will return dozens of links to websites regarding PTSD and intimacy and the challenges PTSD presents in maintaining intimate relationships. There is a flood of information regarding trust issues, poor communication, closeness, violence, sexual dysfunction, and more. However, in my case, all the facts and statistics do is cause my eyes to glaze over without really getting to the point. In an intimate relationship, partners usually come to understand each other's behaviors. What really happens in a relationship when PTSD and intimacy collide?

When PTSD and Intimacy Collide

While reading through a PTSD forum, I came across a plea for help from a man whose wife had suddenly left him. He described her rapid change in behavior. Almost overnight she began finding fault in everything he did for her while she continued to expect more and more from him. She didn't want to be touched. She didn't want to talk. She accused him of infidelity. He wasn't on the forum because he saw these behaviors as symptoms of PTSD. He was there because he knew she had past trauma and he wanted to respond to her without triggering her PTSD.

While I was full of respect for his desire to avoid traumatizing the woman who had just wholly torn him apart, I was shaken by his story. If it had been an older post, I might have thought it was written by my husband only a year earlier. I had acted similarly while on the verge of a dissociative fugue. Just as the man writing the post could not see how his wife's behavior was an extreme flare-up of PTSD symptoms, my husband struggled to understand what was happening to me. When PTSD symptoms intensify, intimate partners can be utterly unprepared for the changes and challenges that rapidly take place in their significant other.

While the story above describes two extreme situations, it points out how much can change when an individual is dealing with heightened PTSD symptoms. Hidden triggers, those flashes from the past that trick PTSD brains into emotionally revisiting traumatic events, can surface at any point in a developing or established relationship. Even after being together for years, a couple's intimacy can be adversely impacted by PTSD.

Here are some examples of common changes in behavior people might see from partners experiencing increased PTSD symptoms:

PTSD Can Lead to Deeper Intimacy

While the list above may seem intimidating, my experiences have resulted in a stronger relationship with my husband. Couples don't need to fear PTSD. By understanding that PTSD can result in symptoms that require support, couples can establish a plan for what to do if difficulties arise. The truth about PTSD and intimacy is this: while PTSD presents its challenges for couples, it also calls upon each partner to share and grow in ways that are immensely rewarding.

How to Care for Someone with PTSD
Common Barriers to Recovery from PTSD Explained
Johnny
January, 27 2020 at 2:42 pm

Melissa, I am with you. I have had a 5 year relationship and we moved in together and talked about future plans of us buying our house and spending the rest of our lives together. Then I got a heart attack and had heart surgery and then 3 months later she was experiencing ptsd symptoms and has moved out and distanced herself from me. She believes I am a trigger due to my heart surgery, she is going to get help but has to wait 8 weeks to get in to see somebody on her health plan. She says she has all the love and care for us and me but she goes numb and cant show or receive the love you need for a relationship. Her husband died of a bought with cancer 12 years ago, so I don't know if that is what help trigger the PTSD with my heart surgery. I am sad and have a hard time sleeping and thinking about it all the time!! What do I do???

Hi Johnny, I’m sorry to hear you’re going through a tough time. I definitely suggest that your partner see a therapist for her PTSD symptoms. They can be very hard to deal with. Wishing you the best!

Darin... go to the VA and get help. They do have a good program. Communication, communication, communication! My Vietnam Vet has PTSD and was just recently diagnosed. He started the program three weeks ago. He is open to learning how to make changes, sort of. People don’t say the tuff stuff about PTSD. No intimacy is a real problem in a marriage! Unless you both get help and learn to understand the whys this will always be a relationship problem for you. I feel like I was lied to, but then he didn’t know about the PTSD and I believed all the excuses he threw my way. He makes a lot of excuses for his avoidance, another PTSD symptom. If you get help through the VA, there is a program for your wife as well. I’m not going to sugar coat it... get help. If you’re young you have time to get understanding and make changes. It is possible but you have to do the work.

I have complex PTSD from an emotionally and sexually abusive past relationship. I have been with my current partner for 5 years and over the past year I have experienced a drastic increase in PTSD related intimacy issues. He feels like he did something wrong and I just don't know how to explain why I was ok for years, but now I am not. This article helped because I now know I am not the only one that had this issue years later. Thank you!

i have ptsd . military and a abusive childhood. it affects my present relationship greatly with intamiancy. she states i dont meet her needs and i feel as if i am doing all i can. how do i help her because i feel i have no more fight in me.

Hi, I was wanting to know if there is anything a person PTSD that struggles wirh intimacy can do to help? Someone who wants to be intimate but physically can't due to the PTSD. Besides medication, are there any other things a person can do to help them be more intimate without their PTSD affecting them?

Hi Hazel. The struggle with intimacy due to PTSD, in my experience, takes time and understanding. Just as we can not snap our fingers and make our PTSD disappear, we cannot anticipate every situation where our PTSD will interfere with daily life, and that includes intimacy. If therapy is a possibility, it is my first recommendation, and couples therapy can also help your partner to understand the issues you face.
It might be tempting or convenient to separate issues with intimacy from other PTSD symptoms, but they are all part of the same package. While it is difficult, speaking with your partner about your PTSD and about the difficulties you experience with intimacy is crucial. If your relationship has progressed to the point where you are becoming intimate, this is an issue for both of you to face together, whether you include therapy or not. It's through these discussions with your partner that you will discover where your comfort level is, and how to communicate when you're having trouble, even when that occurs "in the moment."

I lost my father and brother in an accident in August of 2016. I was diagnosed with PTSD and a bunch of other stuff. I’ve been having problems with intimacy lately and it feels like I breakdown before or after sex. I love my partner more than anything. I want to please him and I don’t understand why losing two non sexual men would curb my sexual relationship. Please help me understand, or try to understand.

Hi Jen, thanks for sharing. While I'm no expert on the subject, I do know that trauma and grief both have the potential to significantly alter one's ability to be intimate. Perhaps this isn't about sex so much as it is about loving someone and the pain of losing them.
Our brains are fascinating. They try to save us from pain‚ but they don't let us in on the plan. Perhaps there is a part of you that recognizes sexual intimacy as a component of a deep and trusting relationship. Your brain recognizes that the pain of losing someone close is almost unbearable. Grief, especially grief with PTSD‚ can lead us to unknowingly push away loved ones. It's a warped defense to avoid being hurt by avoiding love, but the brain doesn't care about the trade-off, it just wants to feel safe.
There are other reasons that could be leading to these difficulties but you are definitely not alone. If you need further help I suggest finding a counselor experienced in both PTSD and grief counseling. Tia

Awesome article Tia. It is so good to know that you managed to overcome your PTSD and established a stronger relationship with your husband. It is true that couples who manage to get past it, emerge stronger in their relationship, but it requires a lot of patience from the unaffected partner. A lot of times, it damages them too. Therapy helps to deal with these issues.

Again, another great piece Tia. It confirmed some experiences we’ve had and made me see other ones differently. This past two years have been a trigger for me (I am shocked how hard that was to write). Thanks again for sharing.

Thank you Christina. I'm so glad you shared that with me, even though it was hard to write!

Hey Tia! I'm one of the new writers for HealthyPlace. I really enjoyed reading this. Thank you for sharing & I could really relate.

Hi Whitney! Thank you and welcome to the HealthyPlace blogs!

I am heartbroken about my boyfriend whom seems to suffer from PTSD . He broke off our relationship suddenly after 4 years and talk of marriage. He was triggered and has shut me out of his life . I love him and am willing to be there but he insists that I not be there or involved with him anymore. He may be getting help but it's not clear . I respected his wishes but I fear he is lost to me forever.i am focusing on myself but wondering how I can help save our relationship

Hey M, going through the same things. And wondering if there is hope. Heart is with you.

Hi Melissa! I am going thru the very same situation right now and wondering if you could share how your situation played out? It would mean a lot to hear. Thank you so much!