A few weeks ago, I discussed how hyperarousal (or feeling “keyed up”) is a symptom area of combat posttraumatic stress disorder (PTSD). A symptom that is part of hyperarousal is an exaggerated startle response. But what is this response and what might this PTSD symptom look like?

What is a Startle Response?

When you are startled, you feel a number of things. Your heart may race, you may sweat, you may breathe faster, your muscles may tense (to the point you might even jump), and you may feel scared. This is known as your startle response. When someone jumps out from behind you and yells, “Boo!” that may initiate a startle response. For most people, this response is short-lived.

While everyone experiences this type of response, those with combat PTSD may experience a heightened sense of it, may experience it in response to more stimuli, and it may take much longer to pass (Ways to Deal With Hyperarousal Symptoms of PTSD). 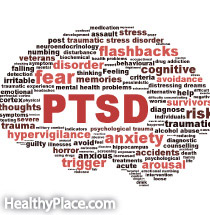 However, when a startle stimuli reminds the person with combat PTSD of his or her trauma, the response will likely be heightened. So, while a car backfiring can startle anyone, a person with PTSD may have a startle response that causes them to “hit the deck” because it reminds him or her of enemy fire.

As stated, most people are startled by certain things, such as a sudden loud noise, but those with PTSD may experience a startle response from stimuli that doesn’t startle most people. What we know is that people with PTSD are constantly looking for danger in their environments, so even small changes in the environment, such as a hand placed on the shoulder unexpectedly, may cause a person with PTSD to be startled.

Getting Over a Startle Response When You Have PTSD

While some people find being startled, or suddenly scared (such as by a horror movie), almost enjoyable, it’s pretty much guaranteed that a person with PTSD will not feel that way. And while the average person will get over a startle response quickly, research has shown that it takes people with combat PTSD longer for their bodies to return to normal after being startled. Additionally, people with PTSD often also experience heightened physical symptoms, such as an increased heart rate, even before they are startled making their response even stronger.

What Does the Startle Response Mean for People with PTSD?

What this means is that for people with combat PTSD, being startled is not a fun or “good” thing. It is not okay to scare a person with PTSD just to watch them jump. Doing such a thing may actually be traumatic and is absolutely nothing to laugh at.

http://blog.medicinegarden.com/2009/11/high-cortisol-sympomsptsd-and-you-part-1/
Great article and discusses adrenals and high cortisol as the cause. Also how to find a doctor who can help relieve this.

Finally, validation that what I experience as passenger in a car which has an unexpected movement (abnormal startling) has a name, is a true event for me and other people have it. I could cry with relief. I was an aide on a school bus that crashed (no children on board) and turned over. I did not have a seatbelt on and flew all over the bus. I experience embarrassing reactions when our car hits a bump. Yikes!

Grew up in a house with parents shouting and arguing constantly/domestic abuse and although it occurred i never witness the physical assaults. There was chronic and long term exposure to this relieved only by going to college.
To this day (I am in my sixties) sudden loud noises, turning around and suddenly seeing someone that entered the room quietly, sets off the startle response. Sometimes i even yelp when it happens. I am short of breath for several minutes afterward.
So after 38 years of marriage my wife finally says "I wonder if you gave PTSD?" So now maybe I can do some research and understand this better.

I am a retired LEO shot many years ago. To this day, a loud noise (especially if it resembles gun fire) will cause me (before I can think about it) to go into a crouch and move my hand towards my weapon. Very embarrassing in public.

I have PTSD from a violent armed robbery years ago. As part of my ongoing issues, startle response is one that cause a lot of unwanted attention; even from family members. Being referred to as "jumpy" or "on edge" doesn't even begin to describe it. A noise that doesn't affect others will make me physically jump, have heart palpitations and leave me distracted (on alert) for some minutes after. An unexpected touch is typically far worse not only will it cause the same reaction as the aforementioned but it will make me cringe from the touch, often offending the good intentioned person. People just don't understand these types of reactions but please understand this....they are uncontrollable, unwelcome and VERY unwanted. They are not in an effort to gain attention; in fact the attention these uncontrollable reactions attract complicate the problem further by attracting attention, comments and chuckles that remind the sufferer how different their life really is.
Be kind. Especially yo what you don't understand!

PTSD born not only in war veterans but in all people experiencing big traumas like car or airplain accident, fire, or excessive fears of something (bridges, or water for example) or for psychological illness (agoraphobia for example)

This isn't only from "combat". These symptoms occur in anyone with PTSD. I'm not sure why an emphasis has been suggested to "combat PTSD"...