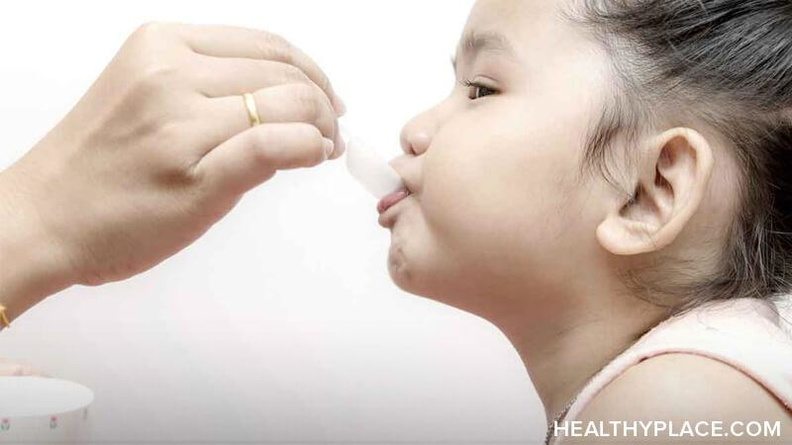 I dropped Bob off this morning to spend the next week with his father. On the way, we hit the pharmacy to pick up his medication refills. I handed him one of his pills, as we'd been out when he took his morning doses. "It's chewable," I said, "so you can take it without water."

When we reached his father's house, I got out of the car, gave him a long hug goodbye, and got back in the car. As he and his father drove away, I noticed, in the passenger seat, the pill I'd handed him twenty minutes earlier.

Medication compliance for my child has been a bone of contention in my life since the day I was handed Bob's first psychiatric prescription. His father--who, ironically, made the first appointment toward having Bob evaluated and medicated--has vehemently opposed Bob's taking psychotropic medications of any kind. And he's made sure anyone within earshot is well aware of his position--including Bob (When Parents Disagree On Psychiatric Treatment).

I have spent countless hours giving Bob the drug speech:

I've recited this diatribe so many times, my brain tends to switch to autopilot as soon as I begin. Unfortunately, I have serious doubts as to whether or not Bob understands--or believes--a word of it. 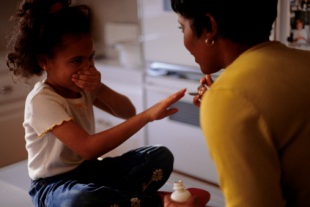 Opposition to medication can come from a variety of sources, but I think the most damaging source for Bob is his father. During Bob's last inpatient hospitalization (at age 6), his father was restricted from visiting after being overheard telling Bob "don't take any pills they try to give you, you don't need that stuff." He's told Bob I'm the one pushing to medicate him so I "don't have to parent him." No matter how many times I deliver the drug speech, those words--offered by Mom, Hard-Nosed Dictator--aren't nearly as attractive as the ones spouted by Fun Daddy, He Who Surely Tells No Lies.

The older Bob gets, the more he questions his need for medication. He's become more resistant to taking it lately, and I'm beginning to wonder if he's always taking it when he says he is. (I've allowed him to take it unsupervised as a way of affording him some responsibility and showing trust--probably, I admit, not a good idea.)

The day will come (in 8 years, specifically) when Bob's medication compliance falls not on me or his father, but on Bob. In the meantime, I will be dealing with an increasingly argumentative and resistant child who believes he knows best. The day Bob (literally) looks down at me will come sooner than that birthday, and I'm wondering how it will work out.

We all hope to have imparted some wisdom on our children, enough that they can make sound decisions on their own. I'm not sure I've done that in this circumstance, and I worry what the future may look like as a result.

Raising A Child with Mental Illness: "Too Much Freedom" or "Room to Grow"?
Video: When Should Parents Allow Child's Input on Psychiatric Medication?
won
July, 30 2011 at 1:53 pm

OMG.
I couldn't have hardly told my story any better if I was writing it. It makes me beyond upset!
My son is 14. Last year (after a few years on meds), I told his father he had a dr. appt. (which dad was going to take him to) and it was just for a check up and to get a refill on meds. I specifically said to him that "he is doing so good, just get the rx and keep everything status quo". That day, his dad took him off the meds.
He got suspended five times in school the following year, ran away three time and was charged with incorrigibility. Then (for the cherry on top) his dad is using the incorrigibility at home charge to try to gain custody of him.
I put my son back on the meds a few months ago. Never before did I hear complaints. But now I do....all the time! If only that moron would have left well enough alone. Now I have another problem to deal with - my son's issue with taking the meds. To top it off, he has a therapist who entertains the discussions with him and trying to get him to 'want to' take the meds. My son is 14. I asked the therapist why not just tell him to take the darn pill like your mother tells you and carry on? Since when did children get all this authority at a young age? I actually think by his therapist's continued conversation to try to 'win him over' in thinking he's doing him a disservice. I think it'd be time better spent trying to help him see that he's a adolescent who still needs to listen to the non negotiables outlined by his mother....period. And then maybe help him understand what he does have control over.
I don't understand, but I feel you. And I wonder if he is even given his meds when at dad's. I wish there was a way to know....

@won--i agree with you 100%. if your son was hospitalized and needed life-saving surgery at his age, the medical staff would entertain his refusals of surgery with "that's nice, son--but until you're 18 or emancipated (legally), it's your mother's call." (I assume you have legal custody of your son, or whatever authority your state requires allowing you to make medical decisions on his behalf.) Why is the mental health of our children considered "optional" but we can be jailed, ourselves, for neglecting their physical health?

I'm lucky my son takes his medicine with no problem he's 13yo but has been taking meds since 7yo. He has adhd and anxiety. I myself, have bipolar and take alot of meds, so he sees that and I think he realizes he's not the only one. I with you the best with Bob. I know it can be hard my nephew does not like to take his meds.
Michele