How I Was Body Shamed Because of My Binge Eating Disorder

Body shaming someone with binge eating disorder is nothing short of cruel. When my 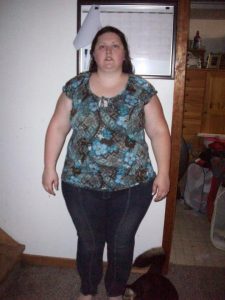 eating disorder was completely out of control, I gained massive amounts of weight in a very short period of time. Around the time I was around 270 pounds, someone had taken photos of me without my consent when we were together one day. I was in my underwear on the couch, eating Doritos.

Recently, someone reminded me that they had a copy of those photos and stated they had the ability to release them on Facebook if I displeased them. I knew what reaction they were trying to elicit from me. They wanted me to be horrified that other people might see me in my underwear when I weighed so much. They wanted me to realize what power they held over me because of the embarrassment and shame they would be able to cause by simply posting some photos.

Body shaming anyone is a terrible thing to do. But when you have an eating disorder that can cause weight gain, body shaming becomes all the more insidious. However, I'm a much different person than I was back then. I refused to let this person intimidate me with only photographic evidence of what my body looked like.

Binge eating disorder and body shame are intrinsically linked in today's vision of what binge eating disorder is. But it shouldn't be. After I received this communication, I went through my old photos. I found pictures that my former partner at taken of me in my underwear, hours before I went into surgery for my gastric sleeve. I was at my very heaviest; 315 pounds and a size 24 (above photo is from a series I took clothed for social media).

I took those photos and scheduled them to post on my personal blog. Why? Because I have binge eating disorder, a real illness, and I will not be body shamed for it. I'm not embarrassed by what I looked like. My weight gain was a symptom of my eating disorder. Would someone try to humiliate a person with a cold because their nose was running?

Moreover, my body is just that: a body. It's not bad or good or the entirety of my being. I looked the way I looked back then and I'm not making any attempt to hide that. It doesn't matter that I was fat. I'm still a human being with dignity.

Body Shaming Needs to Stop, Especially When The Victim Has Binge Eating Disorder

Body shaming is awful, no matter who is the victim, but when the person being body shamed has an eating disorder, these comments and actions are no longer something that will roll off of someone's back. Imagine striking someone in the knees with a baseball bat when they have bad knees already. You're going to do more damage.

When someone body shames a person with binge eating disorder, they are reinforcing the idea that there are "good" bodies and "bad" ones. Also, that your feelings about your body should be dictated by others in a society body shames everyone. What a person looks like doesn't have an impact on other people. But society feels entitled to berate and criticize people, particularly women, based on their physical appearance, no matter what the appearance is.

Working with a binge eating disorder therapist can be a great way to help combat the body shaming that those with binge eating disorder will face. Although many believe that this is just a part of life and it should be accepted and permitted, it's unacceptable for people with eating disorders to experience this abuse from society and individuals, whether they are loved ones or strangers. Don't believe that you deserve it or if you looked a different way, it would stop. Body shaming needs to stop.

nice article. majority of fat people have to face this type of comments. this will help them