Why Do Some People with Borderline Personality Disorder Self-Injure?

It seems to make no sense. Why would any individual self-injure? Self-injury is so closely associated with borderline personality disorder (BPD) that some psychiatrists will make that diagnosis automatically if a patient self-injures. But why would someone self-injure? There are three main reasons: to punish themselves, to regulate their emotions, and to express their pain.

Self-injury as a form of punishment 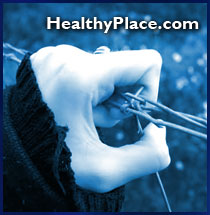 Some people with BPD self-injure as a form of punishment. For example, if one does something perceived as bad, that person may self-injure as compensation.

A video on YouTube talks about this. "You're ugly, you're stupid, any kind of failure, then I thought I deserved the pain," says the woman in the video. "And I know a lot of other people who use it as a punishment and, or, see it that way. One of the reasons to punish is because I deserve the pain."

I used to self-injure as a form of punishment when I was in college. Self-injury was a way for me to punish myself for drinking too much. It was a way to deal with the guilt I felt over my alcoholism.

Self-injury as a way to regulate the emotions

This is where the vast majority of self-injury falls, based on my experience. Self-injury is a way for many people with BPD to cope with overwhelming emotions. It is a way to deal with unbearable emotional pain. As Fiona Apple once said, according to self-injury.net, "It just makes you feel." She also said "It was never, like, 'I am going to hurt myself and put myself in the hospital.' ...It is that I am going to give myself the pain that I need to feel to put the punctuation on this (expletive) that's going inside."

Jessika Addams wrote on her web page " I initially started cutting myself at an early age out of frustration. Cutting tends to relieve anger. Many self-injurers like myself have enormous amounts of rage within and are sometimes afraid to express it outwardly, we injure ourselves as a way of venting these feelings without hurting others. When intense feelings built, I became overwhelmed and unable to deal with it. By causing pain, I could reduce the level of emotional stress to a bearable one."

I started self-injuring after witnessing an assault on my brother. I blamed myself for not being able to stop it. By my twisted logic, if I could overcome my fear of pain by inflicting pain on myself, I could overcome the fear I felt in certain situations and take action. Self-injury was a way to gain courage. It was a way to be strong.

Self-injury as a way to express pain

Princess Diana said it best: "You have so much pain inside yourself that you try and hurt yourself on the outside because you want help."

Richey Edwards, of The Manic Street Preachers, spoke often about his self-injury. "When I cut myself I feel so much better," he said. "All the little things that might have been annoying me suddenly seem so trivial because I'm concentrating on the pain. I'm not a person who can scream and shout so this is my only outlet. It's all done very logically."

When I first started self-injuring in college, it was a way to deal with the pain of my past. It was a way to express that I was hurting.

How to overcome self-injury

Therapy teaches how to replace the negative coping skill of self-injury with positive ones. We can learn to say no to self-injury. (read: Treatment of Self-Injury)

APA Reference
Oberg, B. (2013, May 28). Why Do Some People with Borderline Personality Disorder Self-Injure?, HealthyPlace. Retrieved on 2022, August 17 from https://www.healthyplace.com/blogs/borderline/2013/05/why-do-some-people-with-borderline-personality-disorder-self-injure

What I Learned From "The Hallelujah Life"
Go Home, Becky, You're Borderline