I live in an apartment complex for adults with severe mental illness--too healthy for a group home, too sick for independent living. This makes dealing with my neighbors difficult. Today, I had to deal with a neighbor I suspect has both BPD and Narcissistic Personality Disorder (NPD). 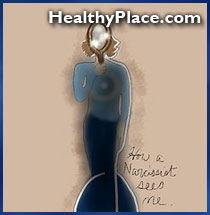 Several of us were angry about this, myself included, and I can't print the humorous nicknames some of us gave him. It was only later that I realized if, indeed, he does have BPD with NPD, this was baseline behavior. So how would I respond?

"About a third of people with BPD also have narcissistic personality disorder (NPD)," reads BPDCentral.com. "People with NPD require a continual supply of admiration, special treatment, and confirmation of their superiority. A hallmark of the disorder is that they don’t have empathy for other people; that is, they can’t put themselves in another person’s place. To the person with NPD, other people are objects whose function is to meet their needs.

"People with NPD may come off as quite charming and confident, even arrogant. They may overestimate their abilities and devalue yours. But don’t let that fool you. Narcissists are actually needier than most people, with low self-esteem and feelings of emptiness and worthlessness. If anyone crosses them or challenges them in any way, they feel empty, jealous, and angry."

This may sound like someone you know. So how do you deal with a narcissist and still keep your sanity?

BPDCentral has a good plan called the Beyond Blame System. It is divided into five steps: take care of yourself, discover what keeps you feeling stuck, communicate, set loving limits, reinforce positive behavior.

Why Beyond Blame Will Work

Taking care of yourself starts with setting healthy boundaries. Reach out for support from others to deal with a stressful situation. Build a sense of self-esteem outside the afflicted person. Learn not to take BPD and NPD personally. "Your family member is acting this way because they’re mentally ill, not because they want to hurt you," reads the site. "Otherwise, why they would do things that make themselves so unhappy?"

Discover what keeps you stuck. Break the bonds of emotional abuse. Learn to talk back to your fear. Let go of your need to be the hero. These steps will help you feel in more control of the relationship.

Communicate. My favorite technique is what police call "The Echo". Rephrase what you think you heard and repeat it back to the person. Sometimes hearing their own words repeated back at them can cause a person to see the illogical behavior.

Set loving limits. Avoid fear, obligation, and guilt. Trust your gut instinct. Set limits and stick to them--don't rescue the person from your rules. Let them know you are serious about consequences.

How Therapy Is Like Pushing a Boulder
Buyer-Beware Therapy: Why You Should Know Your Therapist's Qualifications
EmpathEnergy
June, 3 2021 at 2:59 pm

What a wonderfully helpful article. These are some of the most toxic ppl out there. True 'energy vampires' and dangerous in that you can never win. No matter what your best intentions it's never as good as what they seek or need. And despite your best efforts there's never enough adulation.
The tightrope they walk between victim and superstar is narrow w little room for anyone else.
Boundaries are beautiful. Truly the only way to go.

Thanks! I'm glad you found my system helpful. You can find the whole thing in my book The Essential Family Guide to Borderline Personality Disorder.

I imagine BPD and NPD is the worst combination of psychological illness. I was raised by a mother who suffers from BPD but she doesn't have NPD fortunately. My ex did have NPD, and he did present himself really well in public. He was extremely charming, charismatic and attractive, but inside he was a scared little guy who needed contant reassurance and validations from others. I am so glad that I don't live with my mom anymore, and managed to get rid of my ex quickly. :)