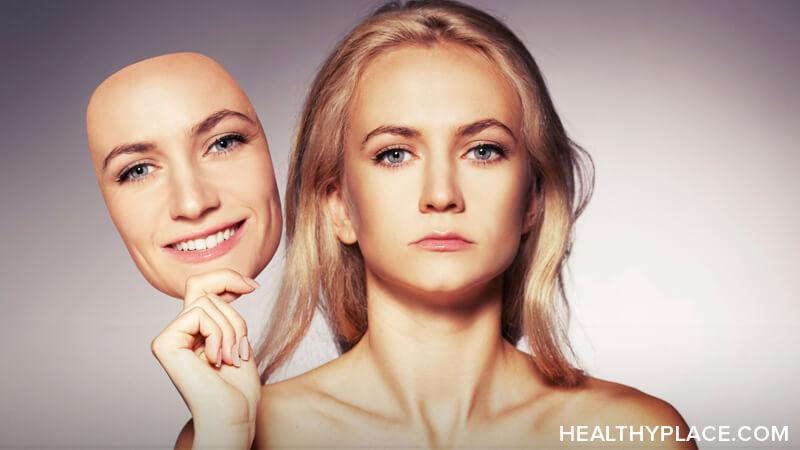 Because of my bipolar disorder, I fake happiness – a lot – like, all the time; like, every time I leave the house. This is due to several factors but, obviously, one of the primary ones is that I, typically, am not actually happy. I am, typically, depressed. And people don’t like that. People don’t like constantly-depressed people. So my bipolar disorder forces me to fake happiness.

Everyone Fakes Happiness – Bipolar or Not

Now, I know that everyone fakes happiness from time to time. It’s normal. Not everyone wants to wear their emotions on their sleeve and so they cover them up through acting. I get this.

I think the difference between the average person with the average faking of happiness and me is that I have to do it virtually all the time.

Why Fake Happiness with Bipolar Disorder?

I actually think faking happiness is a critical bipolar disorder coping skill. I know it just sounds like lying, but actually, it allows you to interact with others, socially, in a successful manner. If all I did was interact with people while radiating depression, people would be repelled and, quite frankly, get tired of me over time. Yes, you can be authentically depressed and show that bipolar depression to others, I would just suggest that you can’t do it constantly. It’s too stressful for the other people.

When I Can’t Fake Happiness in Bipolar Disorder

That said, there are definitely times when I can’t fake happiness because the bipolar disorder is just out of control. I acknowledge this. This sucks for me and those around me, but it happens.

The Problem with Having Bipolar and Faking Happiness

I’m sure there are other problems with faking happiness in bipolar disorder, too, but those are what leap to mind.

Expressing Authentic Bipolar Disorder Emotions and Not Faking It

Like I said, I actually think this skill is important for successful interactions with people. Rightly or wrongly, I think it is. That said, there has to be a time and place when you are the authentic you. And, yes, when you’re alone you might be the authentic you, but you need to be able to express that in front of someone else, too. Not all the time. Not constantly. But sometimes, somewhere, it’s important to feel like the real you.

Acting like the authentic me and expressing the emotions I’m genuinely experiencing is very hard for me. I know how to fake it, I don’t know how to deal with tsunamis of bipolar emotions. I know those emotions can drown me instantly, and I don’t want them drowning others. I don’t trust that I can be my authentic self and not hurt the other person. I’m scared of that. Faking happiness feels like the safer option.

That said, I still recognize the importance of emotional honesty. I’m trying to work on expressing it in small and safe ways (you can start with honesty in front of a pet, or through art and work up to people). I know that in spite of my worries some people can handle it, I just have to trust in that.

So yes, bipolar disorder forces me to fake happiness so often it hurts, but I can’t let it force this lie all the time. Everyone needs to be able to truly express themselves and those with bipolar disorder are no different.

My favorite phrase is ‘ get out of bed, two feet down, put a smile on and off we go!” I hide my feelings constantly and can totally relate with everything. Even after many years with a psychologist it’s really difficult to be ‘authentic’. I think over time it becomes more difficult to be or even recognize the authentic you. Having said all that it is a coping mechanism and saves relationships. But then do we really want to save a relationship which is based on ‘fake happiness’?

Excellent article. I consider what you call faking as a form of survival. I've provided Employee Assistance for a great many working people for many years who are depressed, but have to keep their jobs and therefore not allow others to know of their condition. It's not dishonest, you have to be very careful about what you share. People become very angry at depressed people, because there is still so much ignorance about depression, so many people still believe you can just "buck up" and "change your attitude." Such people create a real hardship for others who are enduring a great deal of pain every day.

I understand exactly what you're saying. I hid my unhappiness nearly all the time as a child and teen and younger adult; my name for it was "being a good little robot." It doesn't take you long to realize that people don't really want to know how you honestly feel unless you're happy. All the time. So I put on my fake happy face, smiled at the right moments, laughed at jokes, feigned interest in conversation about nothing important, and just generally showed people what they wanted to see. I think you're right: faking it does take a huge toll, but it also spares others from feeling uncomfortable and helpless. And a really excellent way to express your real self -- art, music and dance. In channeling our pain and anger and sadness into these things, we can share who we really are without feeling quite so vulnerable. Music used to be my outlet (I used to sing); then I took an interest in art, and found that doing pet and animal portraits and studies of flowers and plants allowed me to be close to those things, which I love, and also to show other people the part of me that cares about those things. Writing helps, too, for whatever reason. Is any of this making sense? I'm 60 years old, and was diagnosed with Bipolar 2, ADHD, Borderline Personality Disorder and several anxiety disorders about 20 years ago, give or take. I'm still learning about everything. Use these thoughts if they help. Thanks, Natasha!

My 19 year old daughter is bipolar. We were discussing her serority dues. She thought we should pay for them while she used her money to fly to Florida to visit a friend. We did not agree. We wanted her to pay half of her dues. She went into a rage. We asked her to take her anti anxiety pills she got from her doc and that made her even madder. Now she won't talk to us until we apologize to her for how we responded to her fit. We ask her to take her meds so she won't cut herself. For the life of me I don't know what to do. Any advise you can give me, I would appreciate it!

Hi Laurie,
Unfortunately, I suspect you are dealing with a situation with multiple aspects.
1. You're dealing with a teen. This can always be challenging.
2. You're likely dealing with someone with little emotional intelligence (this develops in time).
3. You're dealing with a person with bipolar disorder.
All three things are difficult and a product of being a young person with bipolar disorder.
I think the best thing to do when emotions are running high is to involve an uninvested third party, i.e., a therapist. It's unlikely that you will be able to resolve the situation on your own. Help is a really good idea.
With regards to anger in general, it's best to talk to the person about her anger when she is not angry. It's best to try to appeal to her logical mind and talk about what is reasonable when one is angry and what isn't. She needs to make these decisions for herself as she needs to live with them. Again, doing this with the help of a therapist is a good idea.
The situation you're in is tough and you and your daughter both need more tools to deal with these kinds of situations.
Also, I have written a book on living with bipolar and it would be a good idea if you and your daughter read it together. You can find it here: http://amzn.to/2o6fiVf Of course, many other books are also available.
It's really hard when you're young with bipolar and it's really hard for the people around you but I can tell you that it will get easier with more tools and time.
- Natasha Tracy

Hi Natasha, my 19 year old daughter is bipolar. We were having a discussion about her serority dues. She wants us to pay them in full while she uses her money to fly to Florida to visit a friend. We weren't having it. Therefore she went into an episode. My husband told her to take an anti anxiety pill the doc gave her. That made her even madder. Long story short, she isn't speaking to us until we apologize to her for not handling her episode the way she thought we should. I have no clue what to do. Any advise you could give me, I would appreciate!