Can an Energy Drink Cause Mental Illness Symptoms?

Red Bull may give you more than wings: it can give you symptoms of mental illness. What do the studies say about energy drinks and psychiatric symptoms such as mania, psychosis, and substance abuse? According to several studies featured on PubMed.gov (which I will explain in detail later), energy drinks can cause psychotic breaks, manic episodes, and substance abuse relapse.

Energy drinks and mania or psychosis 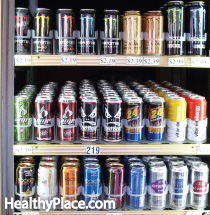 A friend of mine from church has a son with bipolar disorder. He began drinking energy drinks and went into a manic episode. A friend from AA told me that the grocery store in her neighborhood recently banned children under 16 from buying energy drinks without a parent's permission because pre-teens were using the drinks to get high.

But you don't have to take my word for it. According to a report titled "Mania induced by high content caffeinated energy drinks", one 31-year-old female graduate student with no psychiatric history began drinking 5 cups of coffee and 3 or 4 energy drinks per day (each energy drink contained 81 mg of caffeine, 202 mg of taurine and 151 mg of glycine). Her job performance improved, and she gradually increased to 5 cups of coffee and 10 energy drinks daily. She began to suffer from decreased need for sleep, positive and negative auditory hallucinations, delusions of grandeur, hyperactivity and aggression.

"It has been indicated that daily doses of caffeine greater than 10-15 mg/kg of body weight are sometimes associated with the development of psychotic pictures - although not specifically with affective psychoses," the report reads. "Our patient reached an intake of about 1300 mg daily of caffeine before the onset of her manic episode (equivalent to 24 mg of caffeine per kg of body weight and day)."

In a study titled "Could the use of energy drinks induce manic or depressive relapse among abstinent substance use disorder patients with comorbid bipolar spectrum disorder?", people with a dual diagnosis were studied. In three cases, patients began binging on energy drinks (with a maximum consumption of nine cans per day) and relapsed. In each case, they recovered and abstained after they stopped drinking energy drinks.

"These clinical observations support other case reports that suggest the existence of a potential correlation between excessive energy drink consumption and relapse among psychiatric populations," the study concluded.

A study published in the Journal of Adolescent Health agreed. In this study, which involved 508 college students, "Adding energy drink use to a given day with alcohol use was associated with an increase in number of alcoholic drinks, a trend toward more hours spent drinking, elevated estimated blood alcohol content (eBAC), a greater likelihood of subjective intoxication, and more negative consequences of drinking that day," the study reports. "After controlling for eBAC, energy drink use no longer predicted subjective intoxication but was still associated with a greater number of negative consequences. ... Use of energy drinks plus alcohol represents an emerging threat to public health."

Is regulation the answer?

While many alcohol-containing energy drinks such as Four Loko have been banned in several states, there is no law that stops a bar from selling plain energy drinks. This raises the question "Is regulation the answer?" Personally, I don't think it is. I believe that education is the solution. Know the risks and decide accordingly. One energy drink probably won't hurt, but more than one might do some damage. Remember, your mental health is worth more than a temporary high.

APA Reference
Oberg, B. (2015, April 20). Can an Energy Drink Cause Mental Illness Symptoms?, HealthyPlace. Retrieved on 2023, January 30 from https://www.healthyplace.com/blogs/recoveringfrommentalillness/2015/04/can-an-energy-drink-cause-mental-illness-symptoms

I experienced one episode of medication induced, psychosis. Recently, I have been drinking one energy drink per day. I have spent a lot of time educating myself on the topic of psychosis. Due to certain symptoms I have begun noticing, and based on what I have learned about psychosis, I decided to research the possibility of energy drinks and psychosis. I do have a chronic mental health condition. So now, I have learned this. I am posting it here, to maybe help someone.

I have depression and energy drink helps me battle it I think it’s something to do with the buzz that lightens up my mood, I’ve haven’t drank it in a while now as I’m trying to stop but honestly it’s been up there with one of the hardest times I guess it’s easier to cope Instead of talking to people about it but I don’t know how else to cope with it apart from clenching my fists and being really tense but I don’t know any other methods or things I could replace it with. Tbh I don’t rly know why I’m putting this here but don’t need a reply

Hi I live with depression and I think these drinks make it worse. And I really need to find a therapist badly

Thanks for this article. I've only ever had one energy drink in my life due to the extreme aggression it caused in me after consuming itI have bipolar. Felt like The Incredible Hulk after I drank it. It wasn't pretty! Suspect it's not just the caffeine but some of the chemicals in there as well...