Why Are Psychiatric Drug Side Effects So Severe?

Why are psychiatric drug side effects so severe? Recently, I complained to my psychiatrist that I felt like my heart was racing. She took my pulse, frowned, broke out her stethoscope, then ordered an electrocardiogram (EKG). The EKG came back abnormal, so the nurse practitioner overseeing it ordered another one. Both EKGs showed that I may have had a mild atrial heart attack. I see a cardiologist on Thursday. How could psychiatric drug side effects be so severe? (Check the side-effects of your psychiatric medications)

It reminded me of a lecture in fourth grade science class. Our teacher told us Eli Lilly had developed a cure for arthritis, but the side effects were worse than the arthritis so the medication had been pulled off the market. Yet when it comes to mental health medications, we tolerate some very severe side effects, such as a 36-year-old health nut having a heart attack. Why do we put up with this? Why are psych drug side effects so severe? (Dealing With Medication Side-Effects When Recovering From Mental Illness)

Some Common Psychiatric Drug Side Effects 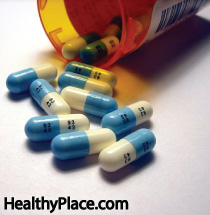 Some psychiatric medications can cause wild mood swings. I had that reaction while on one drug, and my mood swings were so severe I could barely move due to a crushing depression. Another time, I was put on another drug to control tremors caused by my psychiatric drugs. If my therapist hadn't been married to an Emergency Room doctor who realized my emotions were chaotic due to the drug, I probably would not be writing this column.

The neurological disorder tardive dyskensia is common as a severe psychiatric drug side effect; I've heard estimates that this irreversible condition afflicts one out of four psychiatric patients. Also common is restless leg syndrome, which can make sleeping difficult, which can lead to psychosis. Tremors are also common; it is not uncommon to see psychiatric inpatients rocking back and forth.

A social worker told me once that one of the antipsychotics I was on caused violent tendencies in one-third of all who took it. And finally, there's the Food and Drug Administration-required "black box" warning that antidepressant medications can cause thoughts of suicide.

Now, imagine for a moment that an over-the-counter medication caused these effects. Imagine aspirin had death as a side effect. We'd never tolerate that. So why are psychiatric drug side effects so severe?

I'm not afraid of my heart problems because cardiac medicine, especially in Indianapolis, is very advanced. We can alter the heart rate with a medicine. We can do surgery on the heart. We can even transplant a heart. But this is not the case for psychiatry. When it comes to psychiatry, we are where cardiac medicine was 200 years ago.

Indianapolis is a medical research hotspot, and I see great advances in medication every day for every organ except the brain. Every field of medicine is making leaps and bounds except psychiatry. We're even on the verge of curing Ebola, but we don't understand the human mind. We are as terrified by mental illness as we were by Ebola, only we're not willing to do whatever it takes to fight mental illness.

Why is this? I believe that it is because of the stigma attached to mental illness. By and large, we view it as a choice, and therefore not our problem. We see mental illness, whether it's depression or substance abuse, as sin and not as sickness. So we frown on medical intervention and allocate very little money for research into mental illness. As a result, our treatment methods are somewhat barbaric compared to other medical fields (imagine the outcry if we hospitalized human immunodeficiency virus (HIV) positive people against their will), and as the old saying goes, "The cure is worse than the sickness." We tolerate in psychiatry what we'd incarcerate for in cardiology.

We need to view mental illness as just that, an illness that affects the brain. We need to treat it as the public health crisis it is. We need more money for treatment and more research into psychiatry. We need to be willing to do whatever it takes to ease the burden of those who suffer from mental illness, and the place to start is by developing medications that don't run the risk of killing the patient.

APA Reference
Oberg, B. (2015, August 3). Why Are Psychiatric Drug Side Effects So Severe?, HealthyPlace. Retrieved on 2023, February 5 from https://www.healthyplace.com/blogs/recoveringfrommentalillness/2015/08/why-are-psych-drug-side-effects-so-severe

In my personal and professional opinion, the truth lies closer the fact that many causes of psychiatric issues are part of imbalances in the whole "system" that do not require medical intervention. The brain is but one organ in the body. Our brains produce many chemicals that are a complex interplay between our thoughts, events that happen, eg "fight/flight" response when we experience fear, or our brains perceive a threat there is a chemical reaction, what we eat, when we do physical exercise, all affect the brain and our moods. The medical model is a part of a mega billion dollar industry that big pharmaceutical companies and many hold special interest in. Why would they possibly want people to get well on their drugs? Whole infrastructures would collapse/ go bankrupt. Mental illness is big business. If I told you that you could heal yourself with a balanced lifestyle. One that incorporates social support, moderate exercise, fulfilling work, daily meditation, moderate routines and clean eating think how much the psychiatric providers, and pharmaceutical companies would make off of that cure? Again, there are reasons why they don't want you to get well. There is no profit for them. I spent decades of my life on the garbage big Pharma peddles and regained a successful high functioning life after embracing the principles of cognitive behavioral and dialectical behavior therapy (working closely with a behavioral coach ). I meditate daily, exercise and I have never been happier since I (gradually) discontinued all psychotropic medication. Because yes, even trying to come off of the medication is a feat since being on, for example, antidepressants for years alters the brain in an artificial way. I experienced electrical sort of "twinges" , headaches, and a eery floating sensation for months. I missed decades of my life and my family life due to feeling numb and "doped up"/drowsy or more anxious after what I refer to as the benzodiazapines "rebound" effect. I realize that this Issue is much more profound than this place or forum could allow. And further makes me realize that I need to bring awareness in a larger scale. Kind regards.

Glad I came across your article about the dangers of psyche drugs. Want to know more? Check our this article: www.thetahealth.co.za/psychiatric-drugs-and-medicine.html

Indeed, this is the most painful issue in current psychopharmacotherapeutic yreatmeny of mental disotders. By the token, pssychiatry as competent medical branche on up to date treatment and management of mental disorders sufer of insufitient treatment approaches on comparable with others medical disciplines. Beside this, Psychiatric Service is reminded a lpt behind nonpsychiatric medical care unit. So, it ought to promote radically the necessity of complete and instant medical magement of mental pathology as crucial problem on current health service all around the world. This honorable duty should to inicit psychiatrist as carrier of integrated psychiatric tretment of mental diseases. Without this active and inventive work-out in current psychiatry, mentally ill patients will continue to be stigmatization as evil and hard burden from their families an for community, as well. Once moret thanks for your explicit article on functional adwanced of psychopharmacologic treatment of mental disorders !

This is an excellent question which deserves serious looking into. No, I would not take over-the-counter medications with even 1 of the typical side effects of antidepressants. Could the medical companies and its scientists just not put any thoughts of improved quality of life to those forced to take these psychiatric medications?

yes, same thing happened to my son on clozaril.