What are the mental health needs of the Native American community? At first, I was hesitant to write this because although I have Cherokee ancestry, I'm of mixed blood and not enrolled (my blood quantum is too low). But this morning on a news site, I saw that 11 members of a Canadian First Nation attempted suicide on Saturday night alone, causing the tribe to declare a state of emergency.1

As someone who has loved the People since I was a child, this hit home for me. So I'm going to write about the mental health needs of the Native American community and hope I don't come across as a Pretendian talking about the "crazy Indian" stereotype.

The government has a discredited cookie-cutter approach to Native mental health, although each of the tribes has its own culture. The government also has a lengthy history of trying to suffocate Native culture--up until recently it was illegal to practice Native religion, and, in some states, Native religion is still protested (a Seminole friend of mine says the tribe experiences picketers during some ceremonies) or suppressed (when I lived in Texas our inter-tribal sweat lodge ceremonies faced opposition from the police until we threatened to get the Department of Justice involved). In addition, the government has a history of labeling Natives as mentally ill and locking them up indefinitely (read about the Hiawatha Asylum for Insane Indians, where "horse-stealing mania" was grounds for admission). 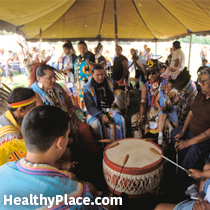 We need cultural acceptance and culturally appropriate therapies. We need to have our dreams and visions respected instead of immediately labeled psychosis. We need to accept not crying--some tribes forbid crying, especially for men--but, instead, channeling our pain into art, dancing, and other therapies such as horse therapy (which is currently being used to treat Native combat veterans of the Iraq War 2).We need to mix traditional and contemporary medicines to treat our illnesses (yes, that includes marijuana and peyote). We need to perform our ceremonies without interference. The White man's way does not work for everyone--ask any non-white about the racism in the mental health system. Our ways are just as valid and should be treated as such.

According to the Rape, Abuse, and Incest National Network (RAINN), the rate of sexual assault of Native women is 34.1 percent, the highest of any racial group. Natives are twice as likely to experience sexual assault as any other racial group. More often than not, it's White men assaulting Native women, and up until 2015, tribal courts could not punish non-Natives for crimes committed against Natives.3 Tribal justice is still iffy in some locations.

It's a myth that Natives are more prone to alcoholism than non-Natives. According to the Rat Park Addiction Study, Native alcohol abuse depends on the tribe's history. Prior to the European invasion, there is no existence of records of substance abuse and cases of mental illness are sparse. For example, although the Inca cultivated coca, they didn't abuse it until after the conquest. After the invasion, two groups developed. The Native tribes who lost their culture suffered from almost universal alcoholism, while Natives who kept their culture were able to integrate alcohol without widespread alcoholism. This story repeats itself every time a new isolated group is encountered.

Most mental health problems in the Native community, therefore, are a result of generational trauma, not genetic vulnerability. When a person cannot process their trauma, they pass it on to their offspring, and the cycle continues (Effects of Combat PTSD On Spouses: Secondary Traumatic Stress). Slavery, genocide, abuse, and extreme poverty--all of which have historically disproportionately affected Natives--are all examples of generational trauma. We need to break the cycle with culturally appropriate treatment. Traditional medicine, dreams, and ceremonies are as valuable to recovery as the right medication and the right form of therapy.

Mental health needs of the Native American community revolve around generational trauma and the loss of culture. We need cultural acceptance, sexual assault recovery resources, and generational trauma recovery resources. We need to fight back against these things which strive to crush us--and the White man should either help or get out of the way.