Toxic Facebook Friends Who Must Be Better Than You

Sally Superior just isn't happy unless she feels superior to someone else. If you post you're looking for work, she'll post that she has a six-figure job. If you post you're having trouble affording your commute, she'll say she always made sure she could afford the commute before taking the job. This person may also post comments belittling anyone who disagrees with her, calling the other person names and accusing him or her of all kinds of unsavory activities (What is Verbal Abuse?). This person may even go so far as to post supremacist comments about race, religion, political views, and so forth.

Sally Superior can't do any of these things. Yes, she's annoying. Yes, she seems to excel at finding your weak point and triggering it. But when you remember she is sick, you can understand why she does what she does and ignore her at worst and feel compassion for her at best.

Toxic Facebook Friends Who Only See the Dark Side

Despondent Debbie manages to see the worst in every situation and how it affects her. It could be sunny and warm, a perfect day to be outside, and she'll post about how she doesn't want to get skin cancer from a sunburn. Everyone has times when they're sad, but Despondent Debbie never seems to shake her self-centered pessimism (Is Your Mental Health Tied To Your Level of Optimism?). This person may constantly feel sorry for herself, may have a need to be the center of attention, and may live in permanent crisis mode. 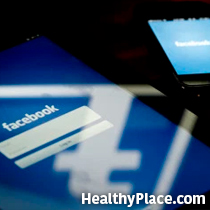 Despondent Debbie may or may not be clinically depressed. We should be patient with her, as we are with any other sick person. We should encourage her to seek treatment and try positive reinforcement. Over time, Despondent Debbie will learn positive coping skills, and maybe even learn to look at the proverbial bright side.

I used to be like this. I saw only the negative things. I stayed in funks for months at a time and was frequently suicidal. But I realized my problem and sought help--the tricky part was not giving up until I found the kind of help I needed. Sure, I had to move across county lines and go on Medicaid to get that help, but the point is I got better. And so can Despondent Debbie, with the support of her friends, therapist, and constant encouragement.

Religious Rick may or may not be a religious fanatic, but he will always inject religion into the conversation at inappropriate moments, usually to condemn you for feeling depressed (Best and Worst Things to Say to Someone Who is Depressed). I dealt with an entire church of Religious Ricks early in recovery, and it got so bad I left the church.

The good news is our culture is shifting to a more progressive stance toward mental illness and houses of worship are moving as well. Our churches, temples, synagogues, and mosques are starting to offer counseling (yes, it's buyer-beware therapy, but most of the time the therapist is qualified to help you) and work alongside doctors and social workers. Clergy are beginning to understand mental illness is not a lack of faith or demon possession but a chemical imbalance, and when they address this from the pulpit, Religious Rick will either adjust his views accordingly or become the one guy at every church who isn't happy there and wants to change it to his satisfaction.

Religious Rick is best ignored. An argument over sacred writings such as "King David was depressed," will only convince him his hard-line stance is the only stance. Any attempt at education will likely drive him further into his black-and-white world. Religious Rick needs a change of heart, and, sadly, that's not caused by debate. I've tried. My advice is to ignore him. You may even want to block him.

For Mental Illness, Should I Check the Disability Box?
Manage Self-Harm Urges with the Calm Harm App
Jim Gibson
June, 25 2018 at 6:17 am

Nice topic! Facebook friends are best or worst buddies. Choose only the best ones whom you can count on in times of sadness and problems. Avoid strangers!

Becky
Who is mocking whom? Who is belittling whom? Hmmmmm
You sound very judgemental to me. Obviously these types have touched a nerve in you
"Sally Superior"
(Perhaps you should learn to deal with your own inferiority issues first instead of focusing on others "superiority". Why can't you just try to be happy for everyone no matter what their life circumstances?),
"Despondent Debbie"
(Sounds like you're stigmatizing depression?)
"Religious Rick
If you don't share the same religious beliefs as someone else, fine. That's your prerogative. But at least try to respect others right to believe in what they choose to believe in, even if that may differ from your own beliefs, views and interpretations. You are free to change your religion or place of worship at any time. Be thankful that in your country people at least have the freedom to practice whatever religion they choose, within reason of course (excluding the radicalized terrorist types).... Or do you consider yourself more of the spiritual type, if so why do you even bother with religion at all). To me you have a prejudiced POV and are intolerant of other people
Remember, judge not, lest you be judged. No human being is perfect, and that includes you.
If these types of so called "toxic" people don't meet with your approval and you don't enjoy interacting with them, then don't, just "unfriend" them on facebook, etc or limit your contact with them.
The world is full of complex imperfect dsyfunctional people. As the saying goes, until you've walked a mile in their shoes...
You can't change people. You can only change yourself. Surely you must realize this by now
Personally I believe people are put on our path for a reason... to teach us something and to test our ability to get along. Until we learn to pass the test successfully the same type of people will continue to crop up and give us problems