In a fit of anger, I threw away my scale in January.

The temptation to buy a new one was very strong, but I knew I needed to move beyond obsessing about numbers in order to achieve true recovery.

Therefore, I haven't known my weight in almost eight months.

And surprisingly, I'm okay with it. 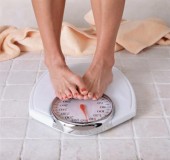 Why is that the doctor's office insists upon weighing you when you are there for something totally unrelated to weight?

But let me backtrack.

About three weeks ago, I developed a pretty severe cold. Or what I thought was a cold. I was very congested, had a sore throat and cough, and generally ached all over.

Then, a few days later, I developed an excruciating pain in my right ear. Having been cut off from my narcotic painkillers due to last fall's misadventures, I could only take ibuprofen or acetaminophen. Hours later, and I was still clutching my right ear and trying not to cry from the pain.

Then, I got a brilliant idea to put salt water in my ear in hopes of alleviating the pain. (Do not try this at home.)

Finally, I got some sense and drove myself to the emergency room, where I was diagnosed with an ear infection, put on antibiotics, and sent home.

Then I waited almost three weeks, still unable to hear out of my right ear, to follow-up with my family physician.

Why did I wait so long to go to my doctor?

I knew I would be weighed, and frankly I had mixed feelings about that. I am proud of my weight gain, as it was a necessary part of my recovery from anorexia.

But did I really need to know my weight?

For days, I have been anxious about this one little thing. I didn't want to be weighed. And yet I did, because that's part of going to the doctor, and besides, I was curious.

Weight gain is one thing. Knowing my weight is a whole another story.

Back and forth I went. Should I ask to be weighed backwards? Should I refuse altogether? Should I just suck it up and face the inevitable?

And it was inevitable. At some point in my life, I was going to find out what I weighed. If I could truly face that number — without fear — then I could consider that one more part of my eating disorder destroyed.

As per my MO, I was late to my doctor's appointment. I have an ingrain passive-aggressive approach to anything I find unpleasant.

There was the scale. Big and imposing and holding the power to destroy me.

Or did it have that power anymore? For decades, even before developing anorexia, I was ruled by this machine. The number on the scale could make my day, or destroy it.

I am ready to take that power back.

I took a deep breath, and then climbed on. It felt like an eternity for the nurse to center on my weight. I waited, expecting to be? Shocked? Dismayed? Upset?

Maybe. But my reaction was mostly nonchalance. Meh. So that's what I weigh. It was about a few pounds within what I thought it would be based on the fit of my clothes.

I was fine with it. Really.

One point for Team Angela, Zilch for Team ED.